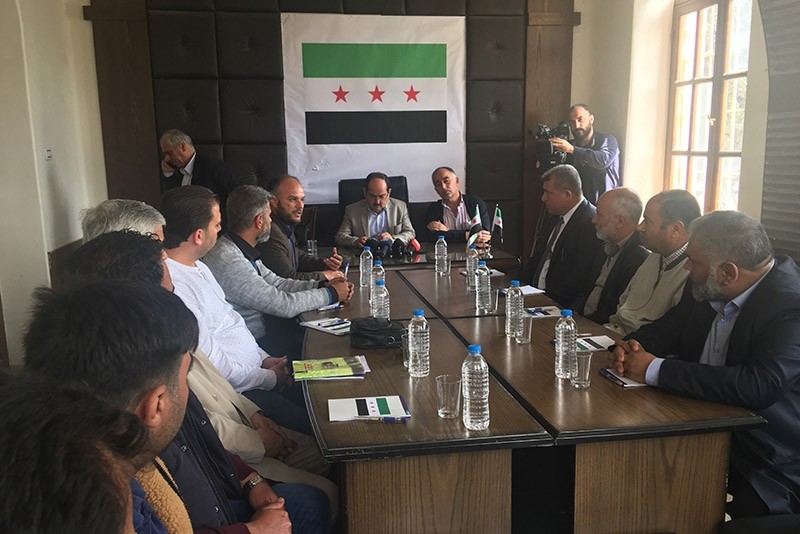 A local council, which includes Kurdish, Arab and Turkmen civilian representatives, was established Thursday in northwestern Syria's Afrin, a new step to help get life back to normal after the PKK-affiliate terrorists, the People's Protection Units (YPG), were eliminated from the province in Operation Olive Branch.

According to Anadolu Agency (AA) reporters on the ground, the city's opinion leaders have voted and formed a temporary local council in the center of Afrin. The interim council was formed to help provide local services and has a total of 20 members.

Out of the 20 members, 11 are Kurdish and eight are Arabs, while one member represents Turkmens.

Being from Afrin and living in the city were set as requirements for becoming a member of the council.

Turkey launched Operation Olive Branch on Jan. 20 to clear the PKK-affiliated YPG and Daesh terrorist groups from Afrin in northwestern Syria amid growing threats from the region. The liberation of Afrin, which had been a major hideout for the YPG and the PKK since 2012, was announced on March 18 after the Turkish Armed Forces (TSK) and the Free Syrian Army (FSA) fully cleared the town of terrorist elements. Since then, efforts to return life back to normal have accelerated to enable the safe return of locals.

Zuheyr Haydar, a Kurdish representative, was elected president of the council.

"We would like to thank Turkey for providing us with this opportunity. We will serve the people of Afrin by using the Euphrates Shield [region] and Olive Branch region as examples," Haydar told AA.

Haydar called on all people of Afrin to return to their homes.

"We can hold a more democratic election if all the people of Afrin come back. We will manage it ourselves, not others from Qandil [where the PKK has established headquarters in northern Iraq] or other places," he said.

He said the local council is in favor of the territorial integrity of the country. The deputy head of the coalition, Abdulrahman Mustafa, who was in Afrin during the elections, said Turkey is working to prevent the division of Syria. "Our priority with Turkey is the same. The local council will begin its services in health and education soon. We will endeavor to bring back those who fled the terrorists in Afrin," he said.

Ankara said life in Afrin would return to normal as soon as possible. Recently, a local council of 30 members was established at the Afrin Liberation Congress, which convened in Turkey's southern city of Gaziantep with the participation of more than 100 people.

The congress made several decisions in an effort to rebuild Afrin and enable the return of displaced people. The congress announced that control of Afrin should be given to the people of Afrin and the election of local council members should be held regularly and monitored by nongovernmental organizations. It also said the public needs to be disarmed and all segments of society should be respected. According to the final declaration, local security forces will be formed and composed of people who are not members of any party.