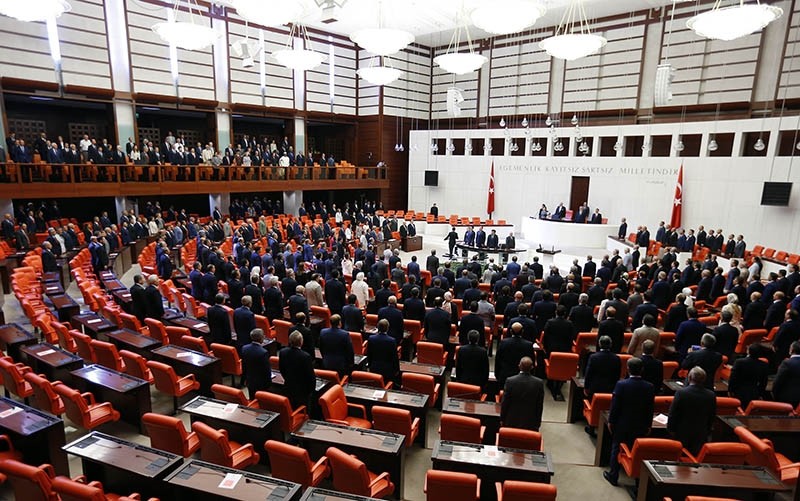 Three political parties at the Turkish parliament united against the killing of Palestinians by Israeli soldiers, as they issued a joint declaration against the massacre.

"Palestinians' peaceful reaction over U.S. and Israel's move ignoring UN resolutions and the international community is their fundamental right," the statement said.

The statement added the U.S. move to relocate its embassy to Jerusalem "aids and abets" killing of Palestinians in Gaza.

Meanwhile, pro-PKK Peoples' Democratic Party (HDP) did not sign the declaration and said that they will sign their own declaration.

Turkish political parties condemned Israel for the recent killing of dozens of Palestinians in the besieged Gaza Strip.

According to the Palestinian Health Ministry, at least 60 Palestinian demonstrators have been martyred by cross-border Israeli gunfire in one of the deadliest single-day massacres in the country's history.

"Jerusalem cannot be Israel's capital," MHP Chairman Devlet Bahçeli said in a written statement. "Both human conscience and the deep heritage of our faith and its ancient rights will not allow this."

Bahşeli said the U.S.'s recent move to relocate its embassy to Jerusalem had "ignited" a big conflict in the region.

Through the recent violent events, Israel has proven that it is a "murderer" and a "terrorist state", he said.

Underlining the importance of Jerusalem for the three major monotheistic religions, Temelli called on the United Nations Security Council to urgently convene and use its power of sanction.

Thousands of Palestinians gathered on the Gaza Strip's eastern border Monday to take part in mass rallies to commemorate the Nakba anniversary and protest the relocation of the U.S. Embassy from Tel Aviv to Jerusalem.

The rallies were expected to culminate on Tuesday, the 70th anniversary of Israel's establishment -- an event Palestinians refer to as the "Nakba" or "the Catastrophe".