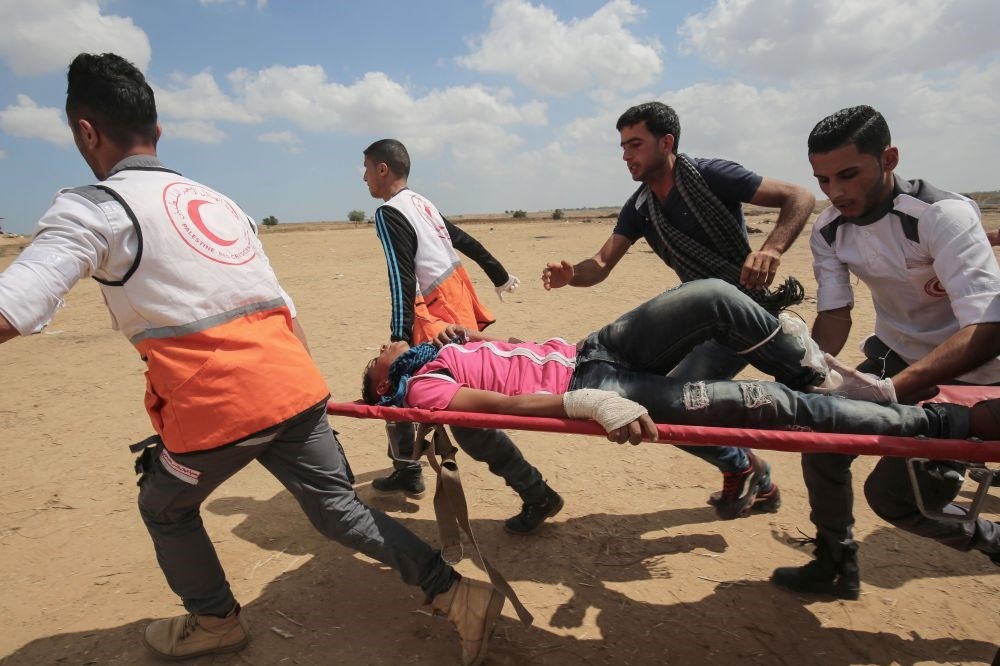 Palestinians carry a protester injured by Israeli forces along the border with the Gaza Strip east of Khan Yunis on May 14.
by Daily Sabah May 16, 2018 12:00 am

In a joint statement the Turkish government and opposition parties slammed Israeli violence in Gaza that caused the deaths of scores of Palestinians, and expelled the Israeli ambassador indefinitely

President Recep Tayyip Erdoğan on Monday condemned Israeli violence in Gaza that killed scores of people, in what he described as a genocide committed by Israel, which he called a "terrorist state." Gaza experienced its bloodiest massacre since 2014 on Monday, as the Israeli military killed at least 52 Palestinians and wounded more than 2,400 others as protesters streamed to the frontier for the climax of a six-week demonstration as the United States prepared to open its embassy in Jerusalem. "Israel is a terrorist state," said President Recep Tayyip Erdoğan, speaking in London late Monday, and condemned "genocide," no matter where it comes from, either from Israel or the United States. He added that the Muslim world will not allow the loss of Jerusalem and called on all Christians, Jews and members of other faiths who have a sense of conscience to raise their voices against the persecution. The U.S. Embassy opening coincided with the day of 70th anniversary of Nakba, or "catastrophe," a term used by Palestinians to describe Israel's occupation of the Palestinian territories following Israel's declaration of independence on May 14, 1948, which led to the forceful displacement of nearly 1 million Palestinians from the lands they had called home for centuries.

On Dec. 6, U.S. President Donald Trump announced his decision to recognize Jerusalem as Israel's capital and to relocate the U.S. Embassy to the holy city. The Jerusalem decision prompted opposition from the international community, as the previously agreed international stance was that the status of the city should be negotiated between the Israelis and the Palestinians and that a unilateral decision on the issue would harm the religious sensitivity accorded to the city by all Muslims, Christians and Jews.

In an exchange on Twitter, Erdoğan and the Israeli Prime Minister Benjamin Netanyahu criticized one another yesterday.

"Erdoğan is among Hamas's biggest supporters and there is no doubt that he well understands terrorism and slaughter. I suggest that he not preach morality to us," Netanyahu tweeted.

"Netanyahu is the PM of an apartheid state that has occupied a defenseless people's lands for 60+ yrs in violation of UN resolutions. He has the blood of Palestinians on his hands and can't cover up crimes by attacking Turkey. Want a lesson in humanity? Read the 10 commandments," Erdoğan responded.

British Foreign Secretary Boris Johnson said yesterday that the U.S. Embassy move is "playing the wrong card at the wrong time" and called for restraint on the use of live bullets by Israeli forces on Palestinian demonstrators. He added that the U.K. does not agree with the U.S. decision to move the embassy.

President Erdoğan said that, as the rotating chairman of the Organisation of Islamic Cooperation (OIC), he will chair an extraordinary meeting on Friday regarding the Palestinian deaths and called on the United Nations Security Council to gather for an emergency meeting.

The president added that a big rally will be held on Friday in Istanbul and another on Sunday in Diyarbakır to protest Israel's violent acts.

Erdoğan also made a phone call to Palestinian leader Mahmoud Abbas late Monday evening. The two leaders exchanged views on the relocation of the U.S. embassy to Jerusalem and Israeli attacks against Palestinians, sources said.

Speaking at the ruling Justice and Development Party (AK Party) parliamentary group meeting yesterday, Prime Minister Binali Yıldırım said Parliament will convene later in the day to hold a special session on the issue of Jerusalem.

"The U.S. has ignored the will of 128 U.N. member countries and insisted on this wrong decision. The result is the deaths of 61 people and thousands of injuries," Yıldırım said, referring to the U.N. General Assembly resolution adopted by 128 countries on May 21, 2017 against U.S. President Donald Trump's decision to recognize Jerusalem as Israel's capital and relocate the U.S. embassy there from Tel Aviv.

Yıldırım reiterated that Turkey stands with Palestinians as a whole.

Earlier on Monday, the Foreign Ministry had also strongly condemned the attacks in a written statement.

"We curse the massacre carried out by Israeli security forces on the Palestinians participating in peaceful demonstrations. Neither regional nor global peace and stability will be viable unless the Palestinian question is settled through a lasting and just solution and unfair treatments toward Palestinian people cease," the statement said.

"We strongly condemn Washington's decision to move its embassy from Tel Aviv to Jerusalem, violating international law and all relevant U.N. resolutions. We reiterate that this action is legally null and void," it added.

Demonstrations were held late Monday to protest Israeli violence in different spots of Istanbul. Thousands have gathered in Istanbul's İstiklal Street to condemn the U.S. Embassy decision and the Israeli bloodshed. Demonstrators carried banners that read "Al Quds belongs to Palestinians," the Arabic name of Jerusalem, in a rally organized by several NGOs under the name "Raise Your Voice Against Occupation."

Speaking at the event, Bülent Yıldırım, head of the Humanitarian Relief Foundation (IHH), the main organizer of the event, said the relocation has reignited an awakening for Muslims and encouraged them to put up a fight against the Israeli occupation. He also called on government to close Israeli diplomatic missions in Turkey and cut relations with "Zionists."

"Gaza has been under blockade for years. The West Bank is in a great destruction. The forces who are trying seize Jerusalem today with the encouragement of the U.S. and other Western forces should know that those who are resisting in the world, standing next to the oppressed in the region, while never give up on fighting," CHP youth branch Chairman Burkay Düzce said.

The main Opposition Republican People's Party (CHP) Chairman Kemal Kılıçdaroğlu said that May 14 will be recorded in history as "Bloody Monday" after Israeli soldiers killed scores of Palestinians, and criticized Washington's role for inflaming the conflict.

Speaking at his party's parliamentary group meeting yesterday, Kılıçdaroğlu said the U.S. had completely lost its role as a mediator in the Middle East because it has sided with the Israeli government and it is no longer able to bring peace to the Middle East, only "blood, tears, and death."

"One would wish that the whole world could stand up against this massacre. These protests are made with low voices," the CHP chairman said.

Kılıçdaroğlu also criticized the Arab world for not uniting for Palestine.

"There is no bigger shame than that in history. While we [Turkey] are embracing, they [Arab World] cannot embrace [Palestine] as much as we do. Protesting with low voices is not the kind of reaction we can swallow when people in their own homeland are being murdered," he added.

The CHP's presidential candidate Muharrem İnce said in his Aksaray rally yesterday that Turkey cannot and should not be silenced over Israel's brutalities toward Palestinians, while emphasizing that as a presidential candidate he is ready to provide any help necessary to the President Erdoğan on this matter. "He [President Erdoğan] has been saying that he will visit Gaza since 2013 but he couldn't. I promise you, if you pick me as the president, I'll go to Gaza," İnce said later on during his rally in Konya province.

"We are strongly condemning Israel's actions while feeling deep sorrow over Israel's killing and injuring a number of Palestinians who were peacefully protesting on Palestinian soil," the Good Party (İP) said over the issue on its official Twitter account.

Nationalist Movement Party (MHP) Chairman Devlet Bahçeli said that Israel will not able to make Jerusalem its capital, underlining that the U.S. move caused significant damage to the region that will be hard to recover from.

"Israel proved that it is a killer, bandit and terrorist state," Bahçeli said in a statement yesterday.