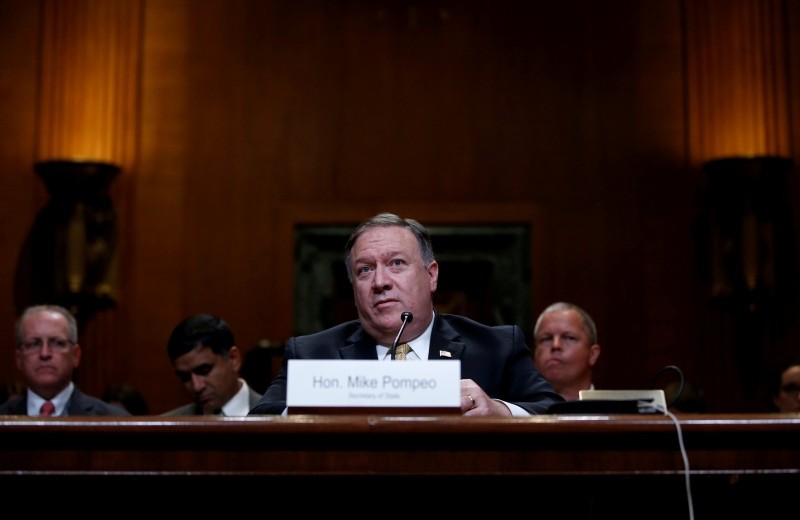 U.S. Secretary of State Mike Pompeo testifies before a Senate Appropriations Subcommittee hearing on the proposed budget estimates and justification for FY2019 for the State on Capitol Hill in Washington, U.S., June 27, 2018. (Reuters Photo)
by Daily Sabah Jun 27, 2018 12:00 am

U.S. Secretary of State Mike Pompeo said Wednesday that the U.S. and Turkey can now begin an "even more productive conversation" as the presidential and parliamentary elections in the country have been concluded.

Pompeo also underlined that an agreement has been reached between the two states regarding Syria's Manbij.

"We made progress three weeks ago in and around Manbij. We came to the understanding that our forces would work together to resolve the complicated issue," Pompeo said, adding that the U.S. is "hopeful" to build on these relations.

"They will ultimately be an important part of the political solution," he added, saying that the U.S. should to recognize the need "to work best alongside them."

A Manbij roadmap was previously announced after a meeting in Washington between Foreign Minister Mevlüt Çavuşoğlu and Pompeo.

It envisaged the deployment of Turkish forces to assure peace in the region and training local forces to establish and maintain security.

The U.S. and Turkish defense officials met recently as part of an ongoing dialogue on the implementation of the Manbij plan and discussed its second phase, which involves joint patrols in Manbij.

Ankara has been long criticizing the U.S. on the grounds that Daesh cannot be defeated by supporting another terrorist group such as the Syrian Democratic Forces (SDF), which is predominantly led by the PKK-affiliated YPG.

U.S. military support for the YPG terrorist group in Manbij has strained ties between Ankara and Washington and has led to fears of military clashes between the two NATO allies since there are roughly 2,000 U.S. troops in the city.