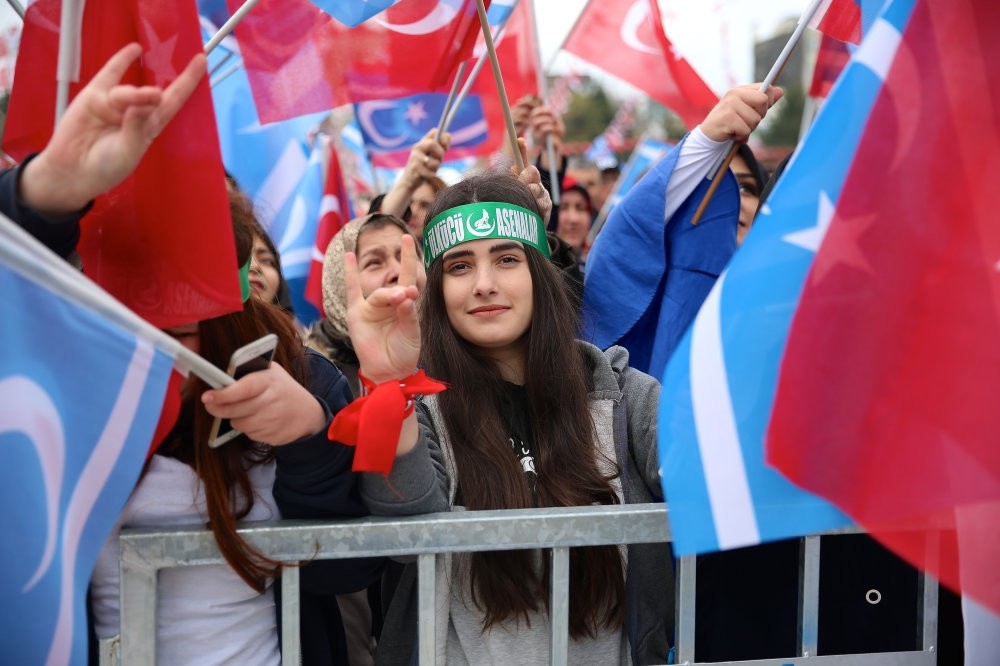 According to experts, nationalism is becoming more effective in determining people's voting preferences mainly due to the security concerns that emerge from both internal and external threats

Sunday's elections concluded with the victory of the People's Alliance, showing that the people of Turkey support stability and aim to preserve the status-quo under President Recep Tayyip Erdoğan's leadership. However, the elections results also reflected the rise in nationalistic tendencies in the country as two nationalist parties, the Nationalist Movement Party (MHP) and the newly established Good Party (İP), gained more than 20 percent of overall votes. Experts say that rising security and terror concerns have increased nationalist tendencies, while adding that the overall popularity of nationalistic sentiments are not a new phenomenon in the country.

"The main reason behind the rise of nationalism is the fact that Turkey is currently dealing with threats both from inside and outside," said Adil Gür, the Istanbul-based A&G research company president, referring to security issues such as the Gülenist Terror Group (FETÖ) and the PKK terrorist group.

"Besides, Turkey went to polls under an unofficial international economic blockade. Thus, to see that nationalist parties gained power in this election is not surprising," he added.

FETÖ's failed coup attempt on July 15, 2016, combined with several PKK and Daesh terrorist attacks in Turkey have led to the normalization of nationalist tendencies, rather than a marginal stance. In addition, Turkey's cross border operations in northern Syria, against Daesh and the PKK's Syrian affiliate have also led to unity around nationalist sentiments, which was, in a way, reflected on electoral behavior. In Sunday's elections, the MHP, the country's main nationalist conservative party, received 11.11 percent of the votes, securing 48 seats in Parliament. These numbers are quite similar to the party's results in previous general elections; In November 2015, the MHP had 11.9 percent of the votes and 40 parliamentary seats. Beyond preserving its votes, the party increased its votes in 45 provinces.

In addition, the İP, which is a far-right nationalist party that consists of MHP dissidents and partook in elections for the first time, received 10 percent of the votes. The votes of MHP and İP combined, which reaches more than 21 percent, shows that since November 2015, the vote percentage of nationalist parties increased almost 10 percent.

According to Oğuzhan Bilgin, a Ph.D. graduate from the University of York, it was expected that there would be an increase in votes in relation with nationalism.

"However, it should be noted that MHP or İP are not the only parties that represents nationalism and attract nationalist votes in the country," Bilgin said.

He further stated that even the ruling Justice and Development Party (AK Party), which entered into the political scene as a center-right party with heavily liberal values, is actually a nationalist party now, which can be seen clearly in the rhetorical change of the party since the Gezi Park protests in 2013.

"As a matter of fact, this is one of the main reasons behind the People's Alliance that was formed between AK Party and the MHP. These parties not only came together to increase their votes but also confirmed that there is a similarity between their political stance," he said.

Ömer Baykal, an academic at Bartın University, explains this convergence between the two parties as follows, "In the past, the MHP was known for its statist stand. However, in 2002, the state mindset has changed with the rise of the AK Party. The state mindset started to serve for the public instead of the state itself. The MHP also transformed itself in accordance with this change within the state mind and started to serve more for people than state. Now, the MHP shares a similar aura with the AK Party."

The interesting point in this situation is that despite having overwhelming nationalist values now, the AK Party still manages to protect its position as the leading mainstream center-right party. In Bilgin's opinion, this is because of the fact that by giving nationalism importance, the AK Party actually responded to a demand from the public, which is why the public welcomed the transformation of the party. Still, despite transformations within the parties' rhetoric, the votes that MHP and İP received are regarded somewhat of a surprise for many. According to Gür, some of the MHP's votes came from former AK Party supporters.

"These were the votes that were transferred to the AK Party between the June 7 and the Nov. 1, 2015 elections," Gür said, referring to the decrease in MHP's votes from 16 percent to 11 percent. Calling these votes "swing votes," Gür said that MHP took most of its votes back in the latest elections.

When it comes to the İP, he expressed that the party received votes from not only the former MHP supporters but also the CHP.

"Traditionally, the MHP takes votes from the middle class citizens of cities that are located in the central Anatolian, Mediterranean and Aegean regions. However, in these last elections, the nationalists with secularist concerns moved toward the İP while the more conservative ones stuck with the MHP," he said. Meanwhile, Baykal also stressed that "the İP represents a more secular, Kemalist view within the MHP. It also gained support from the moderates within the CHP."

All this data aside, there is one thing that the experts agree on, this phenomenon of increase in nationalist affiliation is not a phenomenon that is specific to Turkey but to almost the whole world. Yet, when the rise of nationalism in other places usually coincides with far-right ideologies, such a conclusion would not exactly be correct for nationalism in Turkey. "It is not right to say that the far right is on the rise in Turkey," Baykal said, since almost every political party in Turkey has some kind of nationalist views.