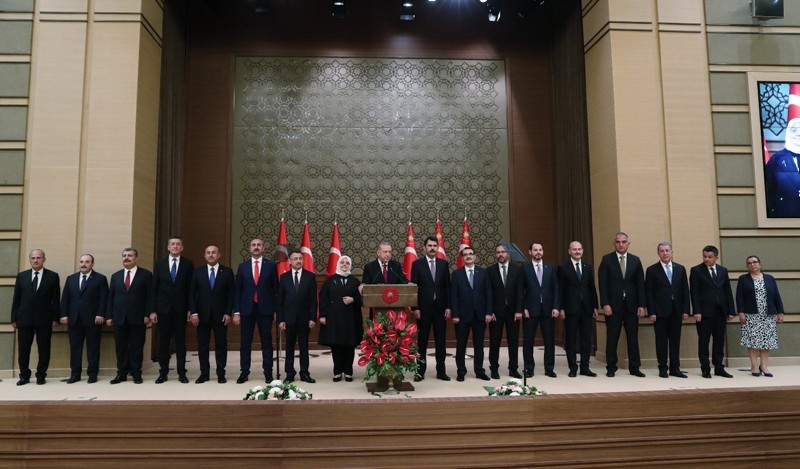 The appointment of former energy minister Berat Albayrak as the new minister of Treasury and Finance and Chief of Staff General Hulusi Akar joining the government as defense minister were the most notable changes in the cabinet.

In the first presidential decree of the new system, the number of ministers in the cabinet was reduced from 25 to 16, with seven of them subsumed into related ministries.

The first cabinet meeting under the new government will convene Friday.

Here's the full list of the Turkish government's new cabinet:

- Koca was the chairman of the board of trustees at the private Medipol University.

- Dönmez was an advisor at the energy ministry.

- Pekcan was the deputy chairwoman of the Women Entrepreneurs Council at the Union of Chambers and Commodity Exchanges (TOBB).

- Ersoy was the chief executive of private company ETS Tourism.

- Pakdemirli was a board member at GSM operator Turkcell, lender Albaraka Türk and the country's largest grocery chain BİM.

- Kurum was the head of Emlak Konut, a state-run real estate developer.

- Selçuk was the head of the board of education under the education ministry.

- Varank previously served as an advisor to the president.

- Turan also previously served as an advisor to the president.

- One of the two women in the cabinet, Selçuk was the Ankara representative of the Women and Democracy Association (KADEM).