We are making a new start, Erdoğan tells Turkish nation 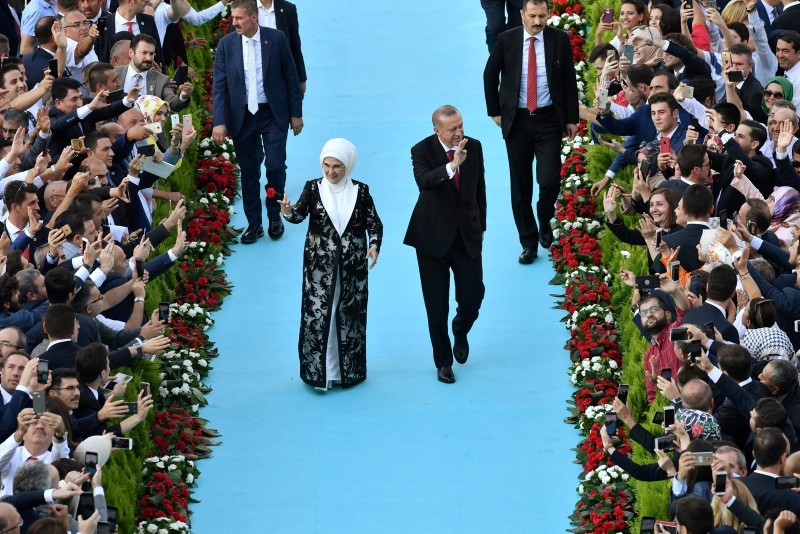 Turkey has entered a new era with the shift to a presidential government system, President Recep Tayyip Erdoğan said in his inauguration speech Monday.

Delivering his speech outside the presidential complex in Ankara, Erdoğan promised to take major economic steps, aim for advancements in all areas, including the defense industry, border security as well as expanding welfare state opportunities for all citizens.

"I will try to be worthy of the Turkish nation with the awareness that I am the president of 81 million Turks and not only of those who voted for me," Erdoğan said.

Underlining that each Turkish citizen's rights and freedoms are guaranteed irrespective of their religion, origin or region, Erdoğan said the periods when certain people and groups were discriminated and subjected to persecution have passed and such cases will never occur again.

Erdoğan said he will visit Azerbaijan and the Turkish Republic of Northern Cyprus on Tuesday in accordance with state tradition. He also said the new cabinet will convene Friday for the first time. He is expected to announce the members of the cabinet later Monday.

During his speech, the president also announced that all celebrations during the presidential inauguration ceremony had been canceled due to Sunday's train accident in northwestern Tekirdağ province, which left 24 passengers dead and 124 others injured.

A total of 28 foreign dignitaries – including prime ministers, vice presidents, parliament speakers and ministers – also attended the ceremony. Secretary Generals of the Organization for Security and Co-operation in Europe (OSCE) and D-8, and the European Commissioner for Migration and Home Affairs were expected among the attendees.