CHP members must get party approval before talking to media, Kılıçdaroğlu says 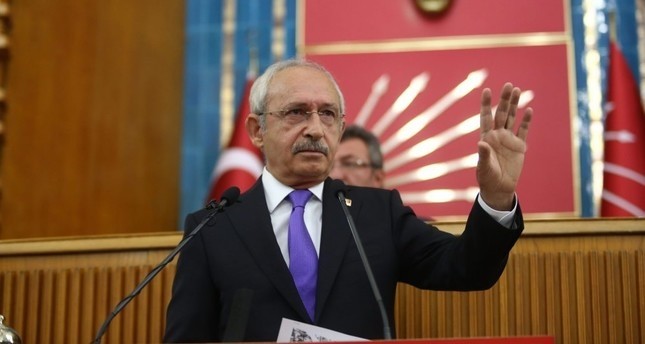 CHP Chairman Kemal Kılıçdaroğlu is trying to increase his authority over the party by controlling internal dissent amid rumors of the possibility of an extraordinary congress to replace Kılıçdaroğlu with the party's presidential candidate from the June 24 election, Muharrem İnce

Kılıçdaroğlu informed the party of his decision at the CHP's first group meeting Sunday, according to media reports.

The move is seen as another attempt by Kılıçdaroğlu to consolidate his control over the party that is facing a growing internal dissent.

"Those who would appear in the media should inform the group deputy chairman [first]. Our group should act in a disciplined way. Everyone needs to conform to the party's discipline. Intraparty debates should remain within the party. I don't think it is right for everyone to speak their mind," Kılıçdaroğlu reportedly said in the closed-door meeting.

After CHP's presidential candidate Muharrem İnce received 30 percent of the votes in the June 24 election, İnce voiced his aspirations for the party chairmanship. He also sparked an internal debate by calling for an extraordinary convention.

In response, CHP spokesperson, Bülent Tezcan, stated that the CHP's Central Execution Board (MYK) was in full support of its current chairman, Kılıçdaroğlu and dismissed any calls for an extraordinary convention.

The CHP has since taken some measures to restore calm within the party. Late last month it referred Gürsel Erol, first CHP deputy in eastern Turkey's Elazığ in 41 years, to the disciplinary commission for criticizing Kılıçdaroğlu after the elections results. Erol had called on the CHP chair to resign from his post but now faces a likely expulsion.

Regardless of the party administration's decision to not hold an extraordinary convention, members and supporters have overwhelmingly voiced their demands for a change.

In support of İnce's leadership, some CHP mayors have also called for an extraordinary convention to elect him as the party chairman.

Mehmet Siyam Kesimoğlu, the CHP of northwestern Turkey's Kırklareli, in a statement on Saturday said that İnce received over 30 percent of the votes for the CHP, a first for the party in decades. He added that he was ready to submit signatures for holding a convention in support of İnce.

On Sunday, a group of 200 people gathered in front of the CHP Istanbul province presidency and issued a statement saying a change was necessary for the party.

Turan Özsoy, head of the CHP's Uşak Youth Branch, highlighted the popular demand for change within the CHP.

Özsoy told reporters that "the winds of change should not be stopped," and added that the chairman needs to call for an extraordinary convention.

They resigned reportedly after problems between the administration and the district head.