Historic day for Turkey: Erdoğan is sworn in as first executive president 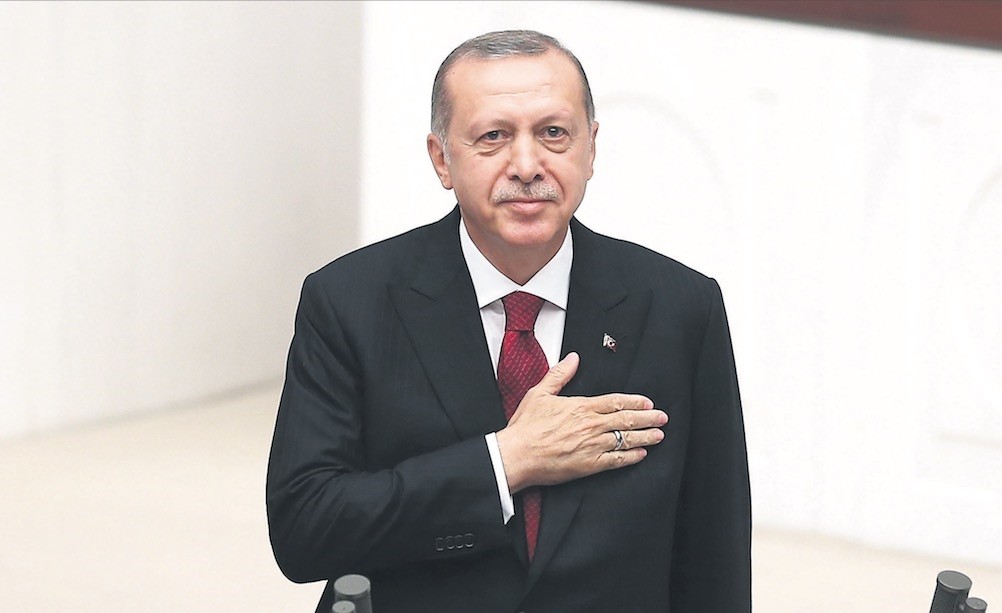 President Recep Tayyip Erdou011fan greets lawmakers at Parliament after taking the oath of office for the new legislative year of the 27th term, yesterday, Ankara.
by daily sabah
Jul 10, 2018 12:00 am

The winner of the June 24 elections, President Recep Tayyip Erdoğan, took the presidential oath yesterday, formally launching the presidential system in Turkey, where he vows to strengthen brotherhood and unity, to develop country and elevate the state

President Recep Tayyip Erdoğan was sworn in yesterday and officially completed his re-election run on a historic day as Turkey steered into a new era with the executive presidential system. "Nothing will ever be the same in Turkey anymore," Erdoğan said in 2001 during the inauguration ceremony of his beloved Justice and Development Party (AK Party). Seventeen years after his remarks in the capital city of Ankara, Erdoğan became the first ever executive president of the Republic of Turkey as the new system is set to take the country to a whole new level in the international arena. Upon taking the oath of office, Erdoğan wished for the very best in the new term with the help of God. "Everything will be better now," he said in remarks to the press. As part of the inauguration program, the president first took an oath in Parliament at around 4 p.m. Following the oath-taking ceremony in Parliament, Erdoğan departed for Anıtkabir, the mausoleum of Atatürk. On the way there, Erdoğan's convoy was greeted by crowds of citizens standing on the sides of the road. As part of the ceremony in Anıtkabir, Erdoğan laid a wreath at the mausoleum of Atatürk and signed the official Anıtkabir memorial book.

In his written message to Mustafa Kemal Atatürk, Erdoğan wrote: "Mighty Atatürk, Turkey successfully completed two crucial elections on June 24, 2018. Our people deemed me worthy of becoming the first president under the new executive system and elected the deputies for the 27th term of Parliament."Erdoğan pledged to strengthen the brotherhood of Turkish citizens and continue to bring greater dignity to the country. He said he is determined to realize Turkey's 2023 goals.Having survived a bloody military coup attempt on July 15, 2016 and having waged a struggle against foes both at home and abroad, especially in the 2010s, Erdoğan has once again claimed triumph at the ballot boxes and been rewarded by the people as the first executive president of the country by the will of the people of Turkey.

At 6 p.m., the inauguration ceremony was held at the Beştepe Presidential Complex in the Turkish capital.

"Our people never left us alone," Erdoğan said during his speech at the ceremony, and added that the he will work to win the hearts of not just the AK Party voters, but the whole nation."Today, we have a new beginning," the president said. He underlined that the new era will be one of a "strong parliament, strong state and strong Turkey." Erdoğan vowed to elevate Turkey to higher levels of development and said, "this is the time for walking determinedly toward reaching [Turkey's] goals."

"Turkey is leaving behind a system which cost the country politically, socially and economically," he added.Presidents of Bulgaria, Georgia, Macedonia, Moldova, Bosnia and Herzegovina, Serbia, Kosovo, Pakistan, Kyrgyzstan, Sudan, Guinea, Zambia, Guinea Bissau, Equatorial Guinea, Somalia, Mauritania, Gabon, Chad, Djibouti, Venezuela and Turkish Republic of Northern Cyprus as well as the Emir of Qatar attended the historic ceremony. A total of 28 foreign dignitaries – including prime ministers, vice presidents, parliament speakers and ministers – were also expected to attend the ceremony. Secretary Generals of the Organization for Security and Co-operation in Europe (OSCE) and D-8, and the European Commissioner for Migration and Home Affairs were among the attendees.

The Presidential Symphony Orchestra, Presidential State Classical Turkish Music Choir, the Turkish Armed Forces (TSK) Ottoman Mehter military musical band were also scheduled to be present at the ceremony. During the ceremony, a special dinner on the occasion of the night was on the menu for the guests. Approximately 10,000 people were invited to participate in the ceremony, including citizens from various sectors such as teachers, firefighters, village headmen, artisans, miners, dentists and others. The ceremony included political and religious representatives from the Balkans, Caucasus and Central Asia, as well as related communities. Each guest were presented with a commemorative TL 1 coin, exclusively minted for the inauguration ceremony of Erdoğan. In addition, a special stamp will be printed on the day of the ceremony.

During a ceremony at the Beştepe Presidential Complex yesterday evening, Erdoğan was expected to introduce the new Cabinet. The new executive presidential system envisages a Cabinet that will not be voted for confidence in Parliament. Since the people directly voted for the president as the head of the state, the president's Cabinet will start working effective immediately. The previous system required the Cabinet formed by the prime minister to have a vote of confidence from parliamentarians. Vice presidents were also expected to be announced yesterday evening. The new ministers and vice presidents will take oath today at 3 p.m. local time.In the June 24 parliamentary elections, held the same day as the presidential elections, the ruling AK Party was short of five deputies to win the parliamentary majority. However, the AK Party's alliance with the Nationalist Movement Party (MHP), known as the People's Alliance, garnered 344 seats in Parliament. The main opposition Republican People's Party (CHP) has 146 seats in parliament, while the pro-PKK Peoples' Democratic Party (HDP) has 67 seats and the Good Party (İP) has 43 seats.

Presidential offices and agencies, newly established under the presidential system, will also be introduced. For example, the National Intelligence Agency (MİT) or the Office of the Chief of General Staff, both of which used to be an undersecretary, will now be categorized as agencies. The new agencies will also include the Presidency of Defense Industry, the National Security Council, the Presidency of Strategy and Budget, the Presidency of Religious Affairs, the State Inspection Council and the Presidency of Communications.Four new offices are also being established to introduce a faster process in governance. Offices on human resources, finance, investment and digital transformation will be established to supervise the state's human resources and institute the state's digital transformation to adapt to the digital age and fight cyber terrorism. Nine separate councils will develop, supervise and coordinate relevant policy suggestions. The main priority will be a more effectively run government by delegating responsibility with authority.

The shift to the new system was sealed last year in a popular vote. A variety of constitutional changes were approved on April 16, 2017 in a referendum. 51.4 percent of the people voted in favor of the changes while 48.6 percent opposed them. The most important features of the new system are expected to be efficient state institutions and quicker decision-making bodies within state institutions. Erdoğan believes that the new system will speed up Turkey's pace in reaching higher levels.

"The new system will enable the reduction of the bureaucracy. We will take decisions faster; all services will be results-oriented," Erdoğan said prior to the June 24 elections.

Furthermore, checks and balances will be crucial in the new executive presidential system. A vital difference from the previous system is that the executive branch, which consisted of the Cabinet, the prime minister and the president in the parliamentary system, cannot be checked by the legislative branch, the Parliament, anymore. The reason behind this is that there will be no longer be a prime minister post and since the president is elected directly by the people, the executive branch will be able to maintain its legitimacy through the people directly, and not via the Parliament. Since Cabinet members will also be appointed by the president, their legitimacy will also be assured by the people as well.