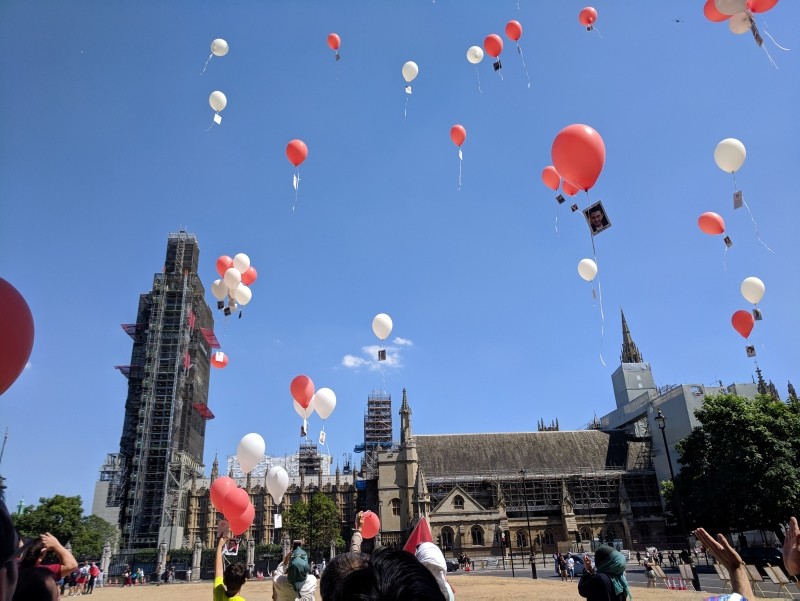 The second anniversary of the 2016 defeated coup in Turkey was marked across the world with commemoration ceremonies.

A ceremony was held at Martyrs Monument in Nicosia, Turkish Republic of Northern Cyprus, with attendance of deputies including Mehmet Demirci, Turkey's Justice and Development (AK) Party TRNC representative, embassy officials and locals.

Derya Kanbay, Turkish ambassador in Nicosia, urged people to be careful about dangerous organizations like the Gülenist Terror Group (FETÖ). "We need to be cautious and on alert against dangerous betrayal networks," she said.

During a commemoration ceremony held at Turkey's Athens Embassy, Yaşar Halit Çevik, the ambassador, called on Greece to give necessary punishment to putschist Turkish soldiers, who escaped to Greece hours after the coup attempt.

A commemoration ceremony was also held at Turkey's Consulate General in Komotini. A minute of silence was observed in remembrance of those who were killed during the coup attempt.

In the British capital London, a commemorative ceremony was held in front of historical Westminster Palace.

Turkish community attended the event organized by Union of International Democrats, which released 251 balloons to the sky for the people killed during the coup attempt.

In Erbil of northern Iraq, Turkey's Consulate General organized a praying event at Savvaf Mosque in the honor of the victims.

In the German city of Frankfurt, Union of International Democrats organized a commemoration ceremony at Gotheplatz Square.

In Skopje, July 15 victims were commemorated in a ceremony held by Turkish Cooperation and Coordination Agency (TIKA) and Yunus Emre Institue (YEE).

Speaking during the ceremony, Turkish Ambassador Tülin Erkal Kara praised Macedonia for giving support to the Turkish government in the wake of the coup attempt and its move to shut down FETÖ-linked media organizations, schools, and corporations.

A photo exhibition of Anadolu Agency's photos on the coup night opened as part of the ceremony.

Zagreb Embassy of Turkey also hosted a commemoration ceremony. A video on FETÖ's coup attempt was shown during the program.

"FETÖ attacked civilians on the night of July 15. We will not forget the victims and veterans, who fought for our democracy on that night," Mustafa Babur Hızlan, Turkey's ambassador to Zagreb, said during his speech.

In Balkan countries like Bosnia and Herzegovina and Croatia, ceremonies were also held.

Two-hundred-and-fifty trees were planted in the memory of July 15 victims in the southern Bosnian city of Mostar.

Zerrin Kandemir, consul general of Turkey in Mostar, thanked Bosnia and Herzegovina for showing solidarity with Turkey in the wake of the coup attempt, during the ceremony.

Nobody was able to harm Turkey's democracy as a result of courage and heroism, she noted.

Quran was recited in the memory of July 15 victims at a ceremony in the Afghan capital of Kabul, which was jointly organized by Turkey's Maarif Foundation and Anadolu Agency.