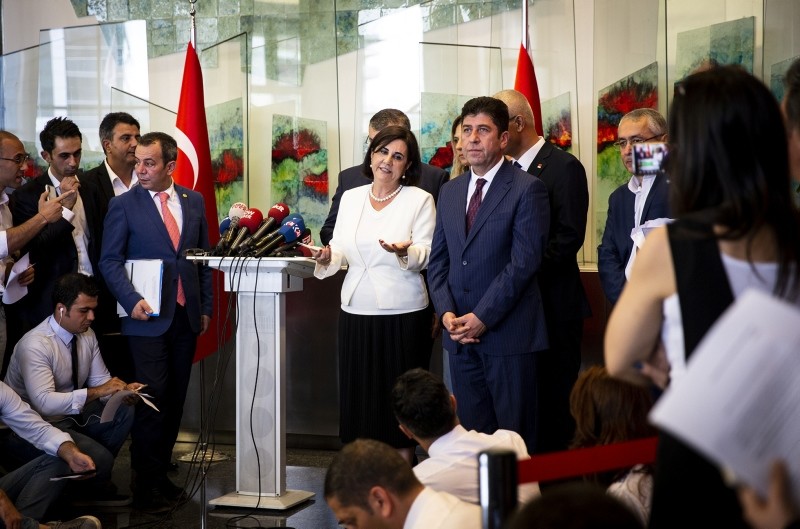 The CHP dissidents centered around the party's presidential candidate Muharrem Ince brought the signatures calling for an emergency convention to the party headquarters. CHP Party Assembly Member Gaye Usluer said that 630 signatures have been submitted.

"Our total number of delegates in 1,240. Therefore, the number of notary signed signatures [to hold emergency leadership convention] should be 621. We have 630 signatures," Usluer said.

She said that they have the information of additional 50 delegates personally gave signatures for the convention in notary offices, but those did not reach their side.

The petition attached to the signatures noted that out of 1,062 delegates elected in provincial conventions, 603 have given signatures for the convention, whereas this number is only 27 out of 178 at-large delegates, which are comprised of the party administration and deputies.

"The emergency convention process should be initiated by our chairman as soon as possible," Usluer added.

Uncertainties may loom for the dissenting front in the upcoming period as a heated debate between the party administration and the dissidents broke out regarding the number of signatures.

In a press conference on late Thursday, CHP Vice Chairman Muharrem Erkek said that the party administration found out that the number of signatures is not enough to call for an emergency convention after preliminary examination, but admitted that their number is close to 620.

According to media reports earlier this week, the dissidents were seeking to pursue a judicial process should the party administration not take into consideration the signatures of those who, later on, decided to withdraw their signatures.

The CHP bylaws require the dissidents gather at least 50 percent of the delegates' signatures for the party administration to call an emergency convention. Following the 15-day period to collect enough signatures in line with the party bylaws, the dissidents had a week to submit the signatures.

However, the opponents declared that they would submit them to the party's administration on Aug. 2, without waiting for a week to pass. If the number of required signatures is submitted to the party headquarters, CHP Chairman Kemal Kılıçdaroğlu, who lead the party since 2011, will have to call a convention within the upcoming 45 days.

Previously, the two sides within the main opposition were locked in a debate after it was reported that some delegates decided to submit their signatures and then changed their minds. While the party's administration argues that such signatures cannot be counted, the dissidents hold a different opinion.

Commenting on the issue, former CHP Izmir Provincial Head Alaattin Yüksel said Thursday that the party administration should take the party to an emergency convention without paying attention to whether there are 620 or 630 signatures.

"It's been gathered in my opinion. It is not that important that it is 620 or 630. It cannot be underestimated when there is so much pressure," he said.

The CHP party administration has been rejecting the idea of holding an extraordinary convention on the grounds that it will undermine preparations for the upcoming local elections.

It is feared that the lengthy process for the convention may linger even longer if the dissidents take the case to court. The dissidents are talking about two judicial decisions that would set a precedent in this respect. However, Usluer said that they do not want the issue to be discussed in courts.

The discussions for holding an extraordinary convention started following the June 24 elections. Some CHP deputies that were dissatisfied with the elections results hold Kılıçdaroğlu responsible for the poor showing and stressed that the party needs a change.

Debates to hold a convention just after elections is nothing new for the CHP, as the party has previously experienced similar debates. The CHP has held 55 conventions so far and 19 of those were extraordinary conventions.