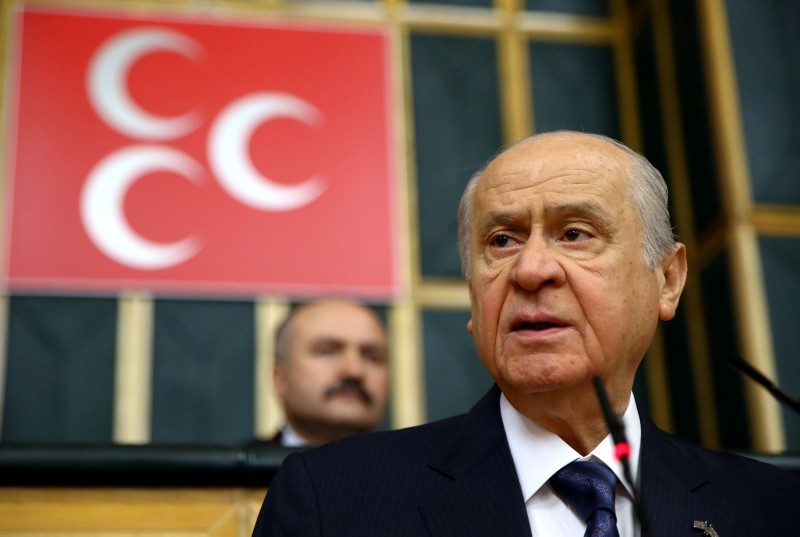 Bahçeli wrote on Twitter that the increases in currency exchange rates against the lira were caused by "cruel tyrannies and despotic sanctions" that aim for the "fall of Turkey."

His remarks came hours after U.S. President Donald Trump ramped up his attack on Turkey by raising steel and aluminum tariffs on its NATO ally.

"Economic terror is being created on the pretext of a pastor," Bahçeli said referring to American pastor Andrew Brunson who is under house arrest in Turkey. "The unfinished treason on July 15 [failed coup in 2016] is being restructured."

The MHP leader also urged against releasing terror-linked Brunson for the sake of lowering exchange rates.

Bahçeli called on the Turkish people to unite against "this artificial jump" and embrace the Turkish lira.

"We need to be in solidarity. We need to show clearly and categorically that the artificial jump in currency cannot take this country as hostage," Bahçeli added.

The MHP leader said this increase in rates was "political and diplomatic blackmail" and not based on economy.

"We cannot and will not be submissive," he added.

The U.S. decision of raising steel and aluminum tariffs on Turkey is another salvo in the growing dispute between Ankara and Washington.

Earlier this week, a Turkish delegation returned from Washington with no progress on the case of American pastor Brunson.

Brunson's charges include spying for the PKK — listed as a terrorist group by both the U.S. and Turkey — and the Gülenist Terrorist Group (FETÖ), the group behind the defeated coup attempt in Turkey of July 2016 led by U.S.-based Fetullah Gülen.