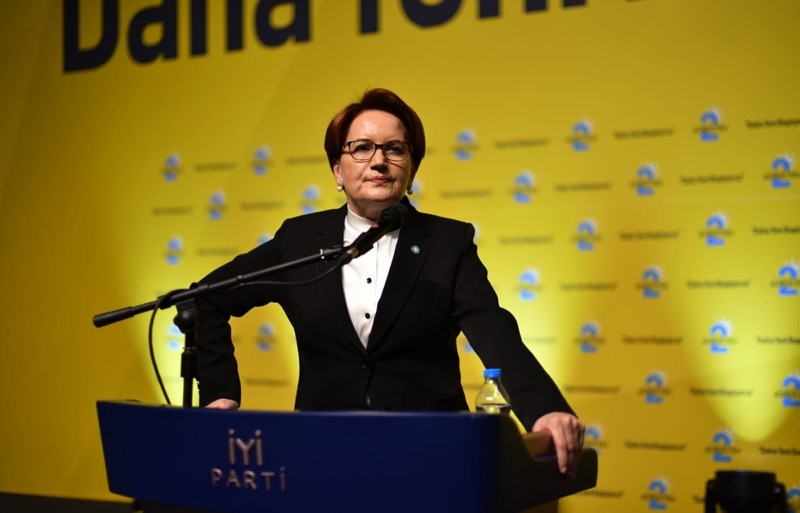 Meral Akşener, the chairwoman of the right-wing Good Party (IYI Party – IP) was reelected to the post Sunday in an extraordinary leadership convention weeks after resigning as the head of the party.

In the convention held in capital Ankara, Akşener, the only candidate to run after intense efforts by the party officials for her return, received 881 votes. The seven remaining votes were ruled invalid.

Out of the 1,123 party delegates, 235 did not attend the convention. The party was shaken by resignations in the aftermath of the elections, with those who resigned blaming Akşener for the party's mediocre performance and her unilateral decisions taken without consulting party's executive bodies.

Speaking at the convention held at the ATO Congresium in Ankara, Akşener said that she will launch a new beginning, highlighting that she is not promising immediate success and they "have a long and hard way ahead." The IP chairwoman also stressed that those who are brave and determined to take this path should join them.

In addition to the election, the General Administrative Board (GİK) consisting of 80 members and the Central Disciplinary Committee (MDK) consisting of 11 members were determined.

In the face of mounting pressure on her, Akşener previously decided to step down and called for an extraordinary convention. That move was interpreted by some as a political maneuver to show party members that the party would fail to survive in her absence.

Commenting on the debates regarding her previous decision, Akşener said that she made the decision not to be a part of a conflict within the party and came back upon the strong call from her supporters.

Akşener had 7.2 percent of the votes in Turkey's last presidential election on June 24, receiving 2.7 percent below her own IP and well below expectations and opinion polls, igniting a leadership debate. In its first election, the IP made it to the parliament with over 40 deputies and received 10 percent of the votes as part of the "Nation Alliance" with the main opposition center-left Republican People's Party (CHP) and the conservative Felicity Party (SP).

Pointing to the upcoming local elections, Akşener stated that "as of tomorrow we are starting our preparations. The IP will be the most hardworking party."

She is expected to be saddled with managing to hold the party together after series of resignations following the June 24 parliamentary and presidential elections.

In her speech, Akşener cited the intense pressure from the party's sympathizers for her return. She said that her resignation stemmed from the notion of accountability, despite the party receiving "as many votes as 50-year-old parties."

Akşener's veiled criticism targeted the the Nationalist Movement Party (MHP), which most of the IP's leadership and support base had split from. She also accused the MHP for supporting President Recep Tayyip Erdoğan and his Justice and Development Party (AK Party).

The MHP lost some of its members to IP following a legal and leadership battle that began after the Nov. 1, 2015, elections, where the party barely crossed the 10 percent national election threshold and lost half its deputies compared to the June 7, 2015, elections.

During the process, then-MHP deputies Akşener and Koray Aydın were the main names that raised their voices against MHP Chairman Devlet Bahçeli, who has ruled the party since 1997. The group was later joined by the party's then-Vice Chairman Ümit Özdağ and a number of other deputies. As they failed to dislodge Bahçeli after a heated judicial process, they left the party in 2016. In October 2017, the İP was founded by the dissidents under the leadership of Akşener.

The IP's problems began before the June 24 elections as some prominent members resigned from parliamentarian candidacy due to uneasiness of their positions in the candidate lists. One of the founders of the party, Yusuf Halaçoğlu, publicly complained about his party's failure to nominate him. Also, the founder of the party's youth branch, Osman Ertürk Özel, who became one of IP's most public faces in the pre-election period, announced his withdrawal as his party's parliamentary nominee on his Twitter account, reportedly in reaction to his low position on the candidate lists. After the elections, scores of party members and several provincial heads resigned from the party after expressing their discontent with the results. The latest resignation was IP Deputy Chairperson Ayfer Yılmaz, who left earlier in July.

On Aug. 6, three founding members of the IP – Yusuf Halaçoğlu, Özcan Yeniçeri and Nevzat Bor – resigned from the party to protest policies of the party's administration. Halaçoğlu and Yeniçeri were also former MHP deputies.

The trio shared a statement to the press regarding their resignations holding the party administration accountable for the unsuccessful results of the June 24 elections and blamed them of "disloyalty" in preparing the deputy lists.

"The party administration opted for figures who joined the party later, while founding members were pushed aside," Halaçoğlu, who read the statement on behalf of the resigned trio, said in a news conference.

The resignations are expected to have a devastating effect on the party, which has been engulfed in intraparty debates since the party's poor June 24 election results.