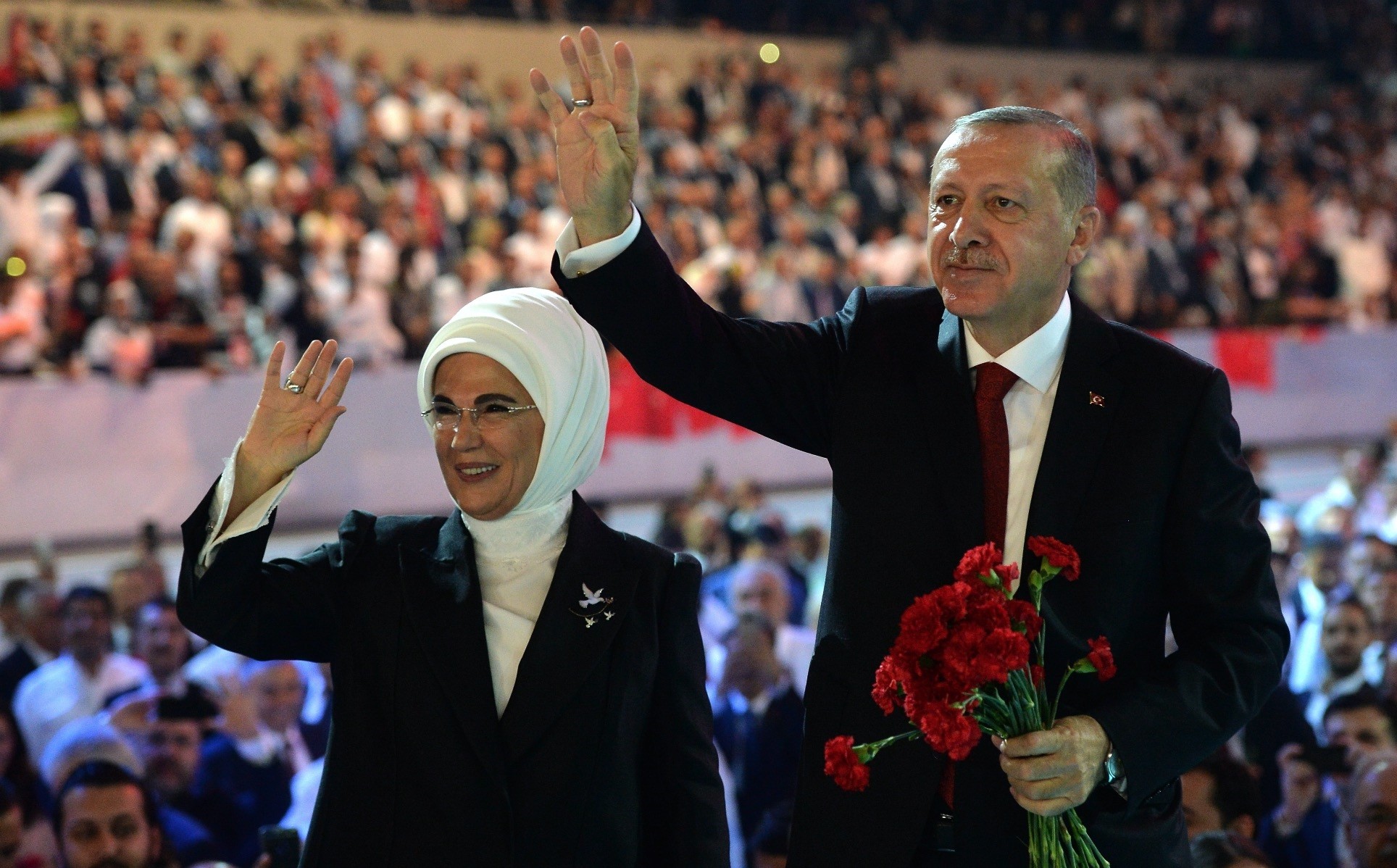 President Recep Tayyip Erdou011fan and his wife Emine Erdou011fan greeting supporters of the ruling Justice and Development Party (AK Party) during an ordinary party convention in Ankara, Saturday.
by Daily Sabah Aug 20, 2018 12:00 am

The ruling AK Party has announced its executive A-team, formed by President Recep Tayyip Erdoğan. It was put together to ensure a blend of young dynamism and the know-how of more experienced members.

The ruling Justice and Development Party (AK Party) announced Saturday its new Central Executive Board (MYK) after the party's Sixth Ordinary Convention. Chairman of the AK Party, President Recep Tayyip Erdoğan balanced his A-team with names representing the dynamism of the youth, rejuvenation and experience. The AK Party's new 50-member Central Decision and Executive Board (MKYK), which included 29 new names, was elected during the Sixth Ordinary Convention held in Ankara. Following the convention, the MKYK convened for the first time at party headquarters to determine the new MYK.

Nine new names were included in the MYK while six names remained in their seats, which indicated that Erdoğan opted to balance the rejuvenation with younger members in his team by including experienced former members and ministers.

Six former ministers in the previous term maintained seats in the MYK. One of these names is Fatma Betül Sayan Kaya, former Family and Social Policies Minister who became vice chairman responsible for social policies.

In the press conference held after the MKYK meeting, party's new spokesman Çelik highlighted that the new A team included names who represent experience and new names representing dynamism and rejuvenation.

One of the names representing dynamism is 37-year-old Erkan Kandemir who became the vice chairman responsible for party organization. Kandemir has studied civil engineering in his undergraduate studies, and later completed a master's degree in international relations and political science from Kingston University and another master's degree in Middle East Studies at King's College London. Kandemir previously served as deputy health minister and also as an advisor to the prime minister.

Earlier Saturday, Erdogan was re-elected as head of the AK Party after he secured the votes of 1,380 delegates at the party's Sixth Ordinary Congress in capital Ankara.

Speaking at the convention Erdoğan gave strong messages stressing that AK Party's efforts to carry Turkey forward will continue with the 2023 and 2071 visions.

He underscored that during its 16 years of rule AK Party was able to overcome various obstacles and challenges with the support of the people. He underlined that difficult periods such as the July 15 coup attempt in 2016 left behind a strong unity of people. Erdoğan stated that Turkey is now being tested by threats directed at its economy. "We see your game and we challenge you," Erdoğan said at the convention.

Referring to the recent crisis with the U.S., Erdoğan stated that "We have not surrendered and will not surrender to those who pretend to be our strategic partners while making us their strategic targets."

Fight against terror to continue resolutely

In his speech, Erdoğan also highlighted Turkey's fight against terrorism will continue resolutely.

He said that the terror threats will be eliminated from its source particularly in Sinjar and the Qandil mountains regions in northern Iraq against PKK terrorism.

In addition to the PKK, Turkey has also been fighting Gülenist Terror Group (FETÖ), the cult which attempted to overthrow the government in the failed coup attempt of July 15, 2016.

The AK Party convention was attended by thousands of people from across the country in and around the 10,500-seat Ankara Sports Center. Some 409 NGO representatives and 217 people including veterans, families of fallen soldiers and people with disabilities attended the convention.

Central Disciplinary Board (MDK), Intra-Party Democracy and Arbitration Board, and Political Virtue and Ethics Board members were also determined by the delegates.

The AK Party normally holds its grand convention once every three years. The last one was in September 2015. In May 2017, the AK Party held an extraordinary convention following the historic approval of a raft of constitutional changes that April.

At the convention, President Recep Tayyip Erdoğan rejoined and was re-elected as head of the party which he co-founded.

On the sidelines of the AK Party ordinary convention, Erdoğan hosted an honorary lunch for several high-ranking officials from different countries at the presidential complex later on Saturday,