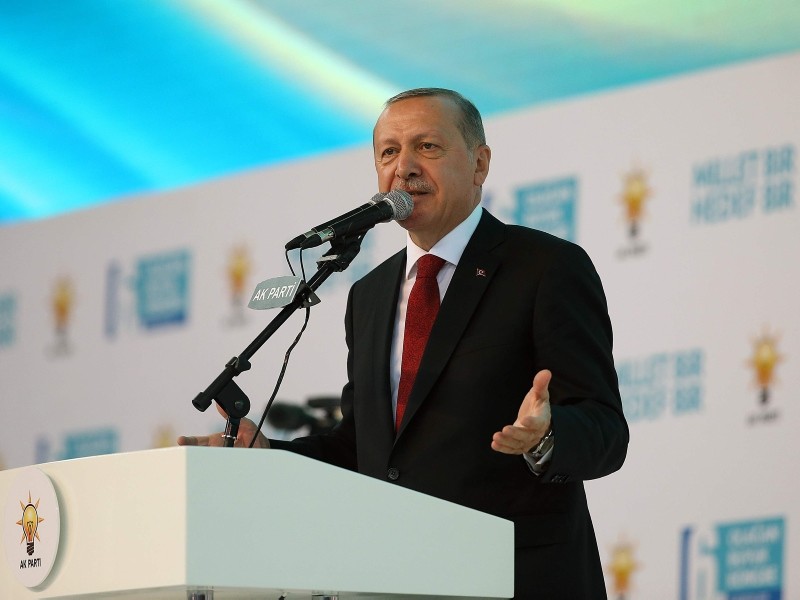 President Recep Tayyip Erdoğan on Saturday marked the anniversary of the Battle of Manzikert, a historic victory for the Turks in Anatolia nearly a millennium ago, saying the determination and unity of Turks was needed to fight against attacks targeting their political and economic independence.

In a written message, President Erdoğan said: "Defying a host of attacks from inside and out, our people have clung to this soil for almost 1,000 years thanks to the soul of Malazgirt."

Turkey's biggest safeguard is the "determination of our people to protect their independence, their motherland, and their future," even in the face of economic attacks, he added, praising the commitment of Turks.

Erdoğan has cast the U.S.' tariffs, sanctions and currency manipulations as an "economic war" and accused Washington of targeting Turkey over the fate of Andrew Brunson, an American pastor being tried in Turkey on terrorism charges.

Despite a rough start earlier in the month, the lira firmed against the U.S. dollar in thin holiday trade on Friday.

The Battle of Manzikert (or Malazgirt in Turkish) on Aug. 26, 1071 saw Seljuk Turks led by Sultan Alparslan defeat a Byzantine army and open up Anatolia for Turkish domination.

Erdoğan drew parallels between the struggles of the Battle of Malazgirt and the 2016 defeated coup attempt in Turkey, which left 251 people killed and nearly 2,200 injured.

"As long as this soul -- which made us take the Malazgirt victory and makes it possible to protect our unity despite our differences -- is kept alive, nobody can hold back our country from reaching its goals for 2023, 2053, and 2071," he added, referring to Turkey's centenary and the 600th anniversary of the conquest of Istanbul, as well as Malazgirt.

Turkey has set specific goals and targets that include major improvements in the economy, energy, healthcare, and transportation for 2023.

Erdoğan also released a separate message honoring Victory Week, which marks two key historical victories by Turkish forces: the Battle of Malazgirt and the Great Offensive of Aug. 26, 1922, which saw invading Greek forces' eventual defeat at the hands of the Turkish army.

He lauded the Great Offensive -- the biggest military operation of the Turkish War of Independence -- as a "milestone in the struggle for independence."

"Our beloved people protected their national and spiritual values at the cost of their lives throughout history," he wrote.

The 96th Victory Day on Aug. 30 commemorates Turkey's victory in the Battle of Dumlupınar, in the Aegean province of Kütahya, part of the Great Offensive.