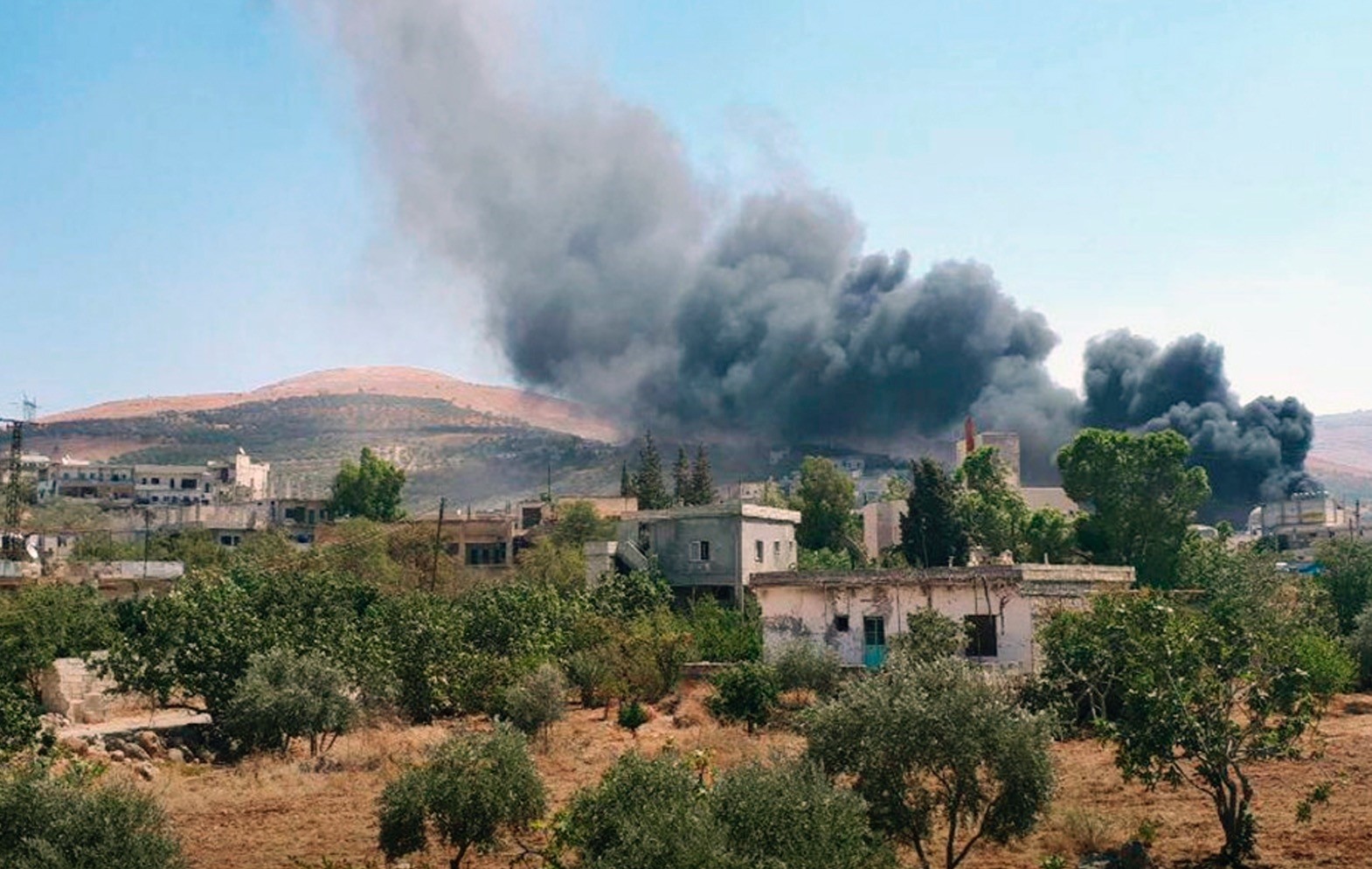 Smoke rises over buildings hit by airstrikes in Mahambal village in the northern province of Idlib, Syria.
by Daily Sabah Sep 06, 2018 12:00 am

Russia and the Assad regime conducted limited airstrikes on the outskirts of Syria's Idlib, signaling a potential military offensive, as Turkey, the EU and U.S., along with international organizations, warn against a large-scale assault due to fears of a humanitarian catastrophe

Recently escalated tension in northwestern Syria's Idlib province has raised the conflict to a new level for the parties involved in the nearly eight-year civil war.

Fears that the province will become a hotbed of tension increased after Russian warplanes bombed several areas in Idlib on Tuesday, raising worries of a major assault by Bashar Assad regime forces and their allies.

Local sources also reported that regime aircraft had started to pound the outskirts of Idlib yesterday, a day after Russian airstrikes in opposition-held and civilian areas. No reports have been released on the possible casualties.

After retaking opposition bastions near Damascus and in the south with backing from Russia and Iran, the regime troops set their eyes on Idlib province, despite warnings from international organizations, Turkey, the EU and the U.S. against the possible offensive.

Turkey has continued talks with other actors to prevent a humanitarian catastrophe in the province. The Russian Ambassador to Turkey, Aleksey Yerhov, said yesterday that Ankara and Moscow are communicating regarding the situation in Idlib, adding that the Syria summit to be held in Iran's Tehran on Sept. 7 will be an opportunity to reach a solution for the war-torn country.

Ankara is determined to find a solution to the Idlib problem through discussions with Tehran and Moscow at the trilateral summit in Tehran tomorrow. Russia and Iran have been the main backers of Assad in the nearly eight-year conflict. Turkey, however, has been supporting the Free Syrian Army (FSA) in its cross-border operations in Syria against Daesh and the PKK terrorist group's Syrian affiliate, the People's Protection Units (YPG), in northern Syria.

On the other hand, Ankara, which already has 12 observation posts in the province as part of the Astana agreement, has continued to build up military deployment near Idlib. A total of eight trucks loaded with tanks and howitzers passed through Kilis, heading in the direction of the Elbeyli district on the Syrian border, according to an Anadolu Agency (AA) correspondent in the field. The military vehicles were transferred for security measures to troops on the Syrian side of the border, according to a source who spoke on the condition of anonymity due to restrictions on speaking with the media.

The National Defense Ministry said yesterday that the last meeting between the working groups of Turkey and Russia on Syria was held on Tuesday. The ministry said the meeting focused on the latest developments in Syria and regional security. It added joint working groups will continue in the future, as well.

U.N. Special Envoy for Syria Staffan de Mistura said on Tuesday that ongoing talks between Turkey and Russia hold the key to resolving the fate of Syria's opposition-held Idlib region without a bloodbath. "Let's try to avoid the last probably major battle of the Syrian territorial conflict ... ending in a bloodbath," de Mistura told reporters in Geneva.

EU Foreign Policy Chief Federica Mogherini said on Tuesday that an offensive on Idlib would cause a new humanitarian crisis.

"We are facing the risk of re-escalation of tensions in Idlib. It should be prevented. Those who take the decision of an offensive will need to be accounted for in the eyes of public," she said after her meeting with Stefan de Mistura.

Idlib and the surrounding region have a population of approximately 3.5 million, and a substantial part of it consists of refugees who fled regime offensives across the country.

While Turkey and Western actors expressed their concern over the situation in Idlib, staunch backers of the Assad regime in the Syrian civil war, Russia and Iran, have underlined the necessity of a military operation in finding a solution in the war-torn province, claiming that steps would be taken to limit civilian casualties.

The Kremlin said yesterday that the situation in Idlib remained of heightened concern and that Russia was talking to various countries about it. "The situation in Idlib is still a matter of heightened concern and worry and, of course, it is on the agenda when it comes to all contacts that the Russian side has at various levels with relevant colleagues," Kremlin spokesman Dmitry Peskov told reporters during a conference call.

Russian Deputy Foreign Minister Sergei Ryabkov said yesterday that any Russian military action in Syria will take precautions to minimize civilian casualties and was precisely targeted, Russia's RIA Novosti news agency reported. "We, as we have said many times before, act precisely, selectively, trying to minimize possible risks to the peaceful population," RIA quoted Ryabkov as saying. He added that situation in Idlib will become clearer from a military point of view after the Tehran summit. Iranian Foreign Minister Javad Zarif, speaking during his visit to Syria earlier this week, told Iranian state television: "Our efforts are for... the exit of terrorists from Idlib to be carried out with the least human cost." Yet, some voices raised from Moscow draw attention to the significance of a political solution and call for a refrain from a military offensive. Russian Col. Gen. Vladimir Shamanov, who heads the lower house of Parliament's defense committee, said a military operation in Idlib would be extreme and called for a political resolution, Interfax news agency reported yesterday. "There is a wide range of political issues. I think it would be slower, but nevertheless there is a need to first resolve it on a political level," Shamanov was quoted as saying.

There was "zero intelligence" of chemical weapons capabilities possessed by Syrian opposition in Idlib, U.S. Defense Secretary Jim Mattis said, adding that the facts did not back Russian assertions. In the past few days, Russian officials, cited by Russian media, have said there was a plan by "militants" to stage a false chemical weapons attack in Idlib province to frame Assad. Russia's Ambassador to the United States Anatoly Antonov said he had told U.S. officials that Moscow was concerned over signs the United States was preparing new strikes on Syria and warned against "groundless and illegal aggression against Syria."