Protection of civilians is of utmost importance, Erdoğan says at Idlib summit 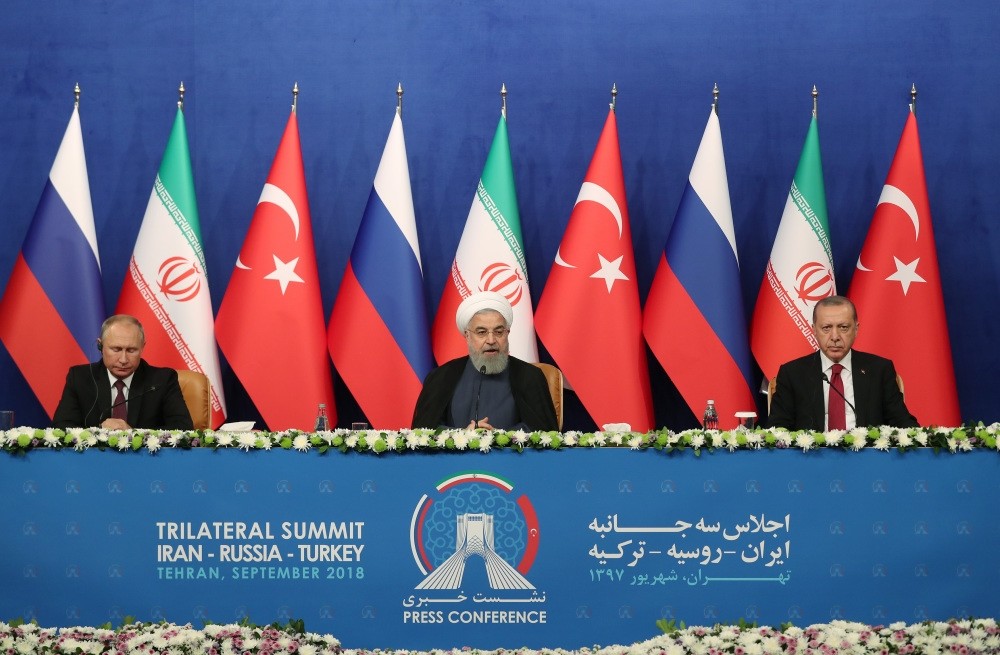 During a trilateral summit held in Tehran, the presidents of Turkey, Russia and Iran agreed on continuing the fight against terror and avoiding harm to civilians in Syria's Idlib, as well as the protection of Syria's territorial integrity

The presidents of Turkey, Russia and Iran convened at a summit in the Iranian capital Tehran on Friday to find a solution to the seven-year-old Syrian war, as part of the Astana peace process. During a joint press conference with Russian President Vladimir Putin and the host of the summit Iranian President Hassan Rouhani, President Recep Tayyip Erdoğan said it was vital to protect civilians, particularly in the northwestern Idlib region, and that terrorist elements should be separated from civilians. "The protection of civilians in the region, separating terrorist elements and protecting the current status of Idlib are crucial matters," Erdoğan said at the end of the summit.

The summit was highlighted with an agreement of the three leaders on the call and urge for disarmament of all parties in Syria, the continuation of the fight against terrorism, avoiding harming of civilians and also protection of the territorial integrity of Syria. The meeting, which is the third time the leaders of the trilateral establishment have convened, took place while Russian jets were bombarding several towns in southern Idlib. Early on Friday, in a series of airstrikes targeting opposition posts, a fighter was killed, said Rami Abdurrahman, the head of the Britain-based Syrian Observatory for Human Rights. Abdurrahman said suspected Russian warplanes carried out the attack. "Don't let people die," Erdoğan said and urged for an immediate cease-fire to be established.

"If we can declare a cease-fire here, it will be one of the most important steps of the summit, and it will relieve the civilians."

As part of the efforts to limit the violence in the country, Turkey, Russia and Iran had previously agreed to establish so-called de-escalation zones across Syria, including in the northern province of Idlib and parts of neighboring Latakia, Hama and Aleppo.

Under the Astana agreement, Turkey established 12 observation points from Idlib's north to south aiming to monitor and sustain the current cease-fire agreement for the de-escalation zones, deliver humanitarian aid and ensure the secure return of displaced people. The first of the trilateral summit at a presidential level was held last year in Russia's Black Sea city of Sochi and the second meeting was held in Ankara this year in April.

In the joint statement, announced after the summit, the parties called on the U.N. and its humanitarian agencies to help Syria by providing additional humanitarian aid. It added that "There could be no military solution to the Syrian conflict" and said that the ongoing conflict in Syria "can only end through a negotiated political process." The joint statement said that Ankara, Moscow and Tehran have "emphasized their strong and continued commitment to the sovereignty, independence, unity and territorial integrity" of Syria. The statement added that the parties have agreed to continue their joint efforts in finding a permanent solution to the ongoing crisis in the country.

Ahead of the announcement of final declaration by the three leaders on Friday, Erdoğan said Idlib is not only important for Syria's political future, but also "vital" for Turkey's national security and regional peace and stability. "We would never want Idlib to turn into a bloodbath. We expect you to support us in our efforts," he said, adding that Turkey cannot leave Idlib to the mercy of Syria's Bashar Assad regime.

Speaking on the possibility of a full-scale attack by the Assad regime, supported by Iran from the ground and Russia from the air, Erdoğan said, "Any attack launched or to be launched on Idlib will result in a disaster, massacre and a very big humanitarian tragedy."

Idlib was turned into a shelter for opposition fighters and their families who were evacuated from different parts of the war-torn country. However, terrorist groups, including the al-Qaida-linked Hayat Tahrir al-Sham (HTS), have also taken parts of Idlib - approximately 60 percent - under control, an issue putting civilians at serious risk in the case of a full-scale attack by the regime and its backing allies. There is also armed moderate opposition in Idlib, called the National Liberation Front. Turkey considers the HTS a terrorist group but not the National Liberation Front.

Highlighting that a refugee wave has already begun toward Turkey, Erdoğan added, "Turkey is already sheltering 3.5 million refugees from Syria. The population of Idlib is 3.5 million. Turkey doesn't have the strength or capability to host 3.5 million more." The U.N. Humanitarian Coordination Office in Damascus also said recently that as many as 800,000 people are already in dire humanitarian situations and they would be displaced in case of an offensive. The U.N. peace envoy for Syria on Friday called for evacuation corridors to be opened for civilians to flee a looming Syrian offensive in the rebel-held Idlib province, that could lead to a "horrific and bloody battle." "People should be granted safe passage to places of their own choosing if they want to leave," Staffan de Mistura was quoted as saying by Angence France-Presse (AFP) at a U,N. Security Council meeting on the crisis in Idlib. Turkey has been hosting nearly 4 million refugees from war-torn neighboring Syria. In the refugee crisis Turkey assumed a gigantic role and welcomed refugees as guests in the country.

Russia's Putin said that a political solution to the Syrian crisis is being promoted through successfully implementing agreements and that a U.N. monitored constitutional committee on Syria is to be established. "We have discussed concrete measures regarding a phased stabilization in the Idlib de-escalation zone, which stipulate... a possibility of making peace for those ready for dialogue," Putin was quoted as saying by AFP in another report. Putin said that Russia hopes that its "call for peace in Idlib zone as well will be heard... we will strive for peace among all warring sides, and we have never factored in terrorist organizations." "We hope that representatives of terrorist organizations will have enough common sense to stop resistance and lay down [their] weapons," Putin added.

The Iranian president, on the other hand, said "fighting terrorism in Idlib was unavoidable," however, he added that "struggle against terrorism... should not harm civilians."

The representatives of the three guarantor countries will meet in Geneva with the U.N. special envoy to Syria in coming days to discuss the process on a constitution. It was announced also that the next meeting at the presidential level of the trilateral entity will be held in Russia. A date, however, was not given. Meanwhile, eight European U.N. Security Council members on Thursday voiced their support to Turkey's diplomatic efforts to avert an offensive in Idlib, according to Sweden's U.N. Envoy Olof Skoog, the ambassador and permanent representative of Sweden to the U.N., said at the organization's headquarters in New York that a full-scale military operation in Idlib would escalate an already dangerous conflict in a volatile region.

"We express our support for the urgent diplomatic efforts being made to this end by Turkey and the United Nations," he added. The eight Security Council members who support Turkey's efforts are Italy, Germany, France, Britain, the Netherlands, Sweden, Belgium and Poland.

Erdoğan also added that Turkey was also uncomfortable with the U.S. trying to strengthen another terrorist group in the region while the Daesh threat is almost over. He was referring to the PKK terrorist group's Syrian affiliate - the People's Protection Units (YPG). "We should stand united against all the initiatives that target Syria's territorial integrity and all terror groups emerging from Syria, including the YPG," Erdoğan added.

The U.S. has supported the YPG under the pretext of fighting Daesh, despite the group's links with the PKK terrorist group. The PKK is listed as a terrorist organization by the U.S., the EU, and Turkey. Washington's military support to YPG has brought its ties with Ankara to historic lows, as Turkey sees the YPG as a threat to its national security. Additionally, Rouhani also said the U.S.' presence in Syria should end. "We have to force the United States to leave," he said.

Killings by all kinds of weapons should end

President Erdoğan also underlined that the international community has been sensitive toward the use of chemical weapons in Syria, but thousands have been killed by conventional weapons and the same sensitivity is not shown.

Meanwhile, there is "lots of evidence" that chemical weapons are being prepared by Syrian regime forces to be used in northwest Syria's Idlib, the newly-appointed U.S. representative for Syria James Jeffrey said Thursday, warning any attack on the enclave would be a "reckless escalation."

"Any offensive is to us objectionable as a reckless escalation," Jeffrey told reporters.

In August, the U.S., U.K. and France vowed in a joint statement to take action against any further use of chemical weapons by Bashar Assad's regime.