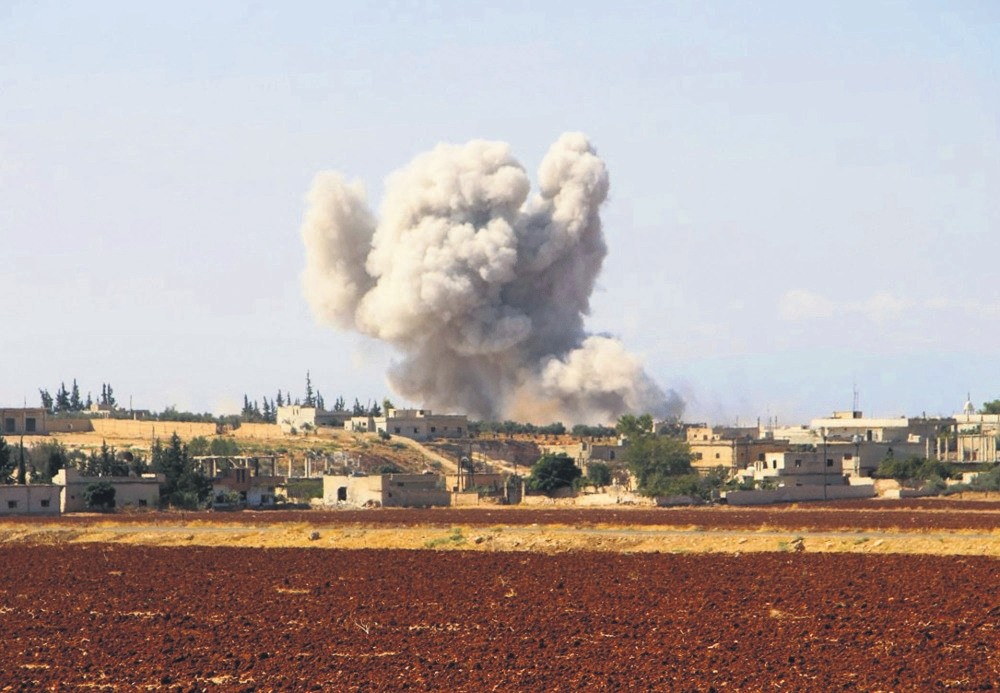 Escaping bombardment by Bashar Assad's forces and its allies, Russia and Iran, large numbers of civilians have begun leaving the last-opposition held enclave of Idlib in northwestern Syria and heading toward the Turkish border.

"We escaped from Hama province to Idlib. But now, we have to leave here too because of the intense airstrikes," said Abu Muhammad, an internally displaced resident preparing to leave Idlib.

Idlib, a province now hosting nearly 3.5 million people, was originally home to about 750,000. Over the past three years, thousands have been evacuated from different parts of Syria to Idlib, under agreements with the regime, as it was deemed a safe zone.

Another resident from Idlib, Ali Avvad, said the recent attacks on Idlib have caused major destruction. "Major damage was caused by the recent airstrikes, our homes and land have been destroyed," Avvad was quoted as saying by İhlas News Agency (İHA) yesterday.

The White Helmets, a local civil defense agency, was quoted by Anadolu Agency (AA) as saying that at least 29 civilians have been killed in the recent airstrikes and attacks by regime forces and Russian warplanes on the Idlib and Haman provinces. "Most of the civilians have been displaced. Our medical centers are not suitable for use anymore," Avvad also said. Last month the Assad regime announced its preparations for a major operation on Idlib. Russia and Iran also back the operation, despite the international community and Turkey's concerns that a full-scale operation would lead to the massacring of civilians and a large wave of refugees flooding toward Turkey and ultimately to European countries.

Speaking after the Cabinet meeting in Ankara, Presidential Spokesperson İbrahin Kalın said yesterday that a refugee influx from Idlib will also affect European countries. "Attacks on Idlib will not only cause a humanitarian disaster, Europe will also be affected by a refugee wave that will affect hundreds of thousands," Kalın said. Kalın also added that European countries should not approach the refugee issue only from a security perspective and should share the humanitarian burden put on Turkey's shoulders.

United Nations officials said Monday that nearly 30,000 people have already been displaced due to the attacks on Idlib. "As of Sept. 9, some 30,542 people have been displaced from northwestern Syria, moving to different areas across Idlib," David Swanson, spokesman for the U.N. Office for the Coordination of Humanitarian Affairs (UNOCHA), said to Reuters on Monday. "I am deeply worried over the recent escalation of hostilities in northwestern Syria, resulting in the new displacement during the past few days of over 30,000 women, children and men and scores of civilian deaths," Panos Moumtzis, U.N. regional humanitarian coordinator for the Syria crisis, also said in a statement yesterday. Moumtzis, added that there are currently some 6.2 million internally displaced people inside Syria.

"A further escalation of military operations in Idlib and surrounding areas will not only endanger civilian lives in this densely populated area but severely impact humanitarian partners' ability to deliver life-saving assistance," he said.

However, the coalition does not include Idlib's other dominant force, the Hay'at Tahrir al-Sham (HTS), which is seen as a terrorist group by the U.S., Russia and Turkey, as well as many other countries. The existence of the HTS in Idlib has been cited as justification for the possible military offensive by the Assad regime. Turkey has said that the terrorists must be separated from the moderate opposition and that indiscriminate attacks on the province will lead to the massacring of civilians.

"The protection of civilians in the region, separating terrorist elements and protecting the current status of Idlib are crucial matters," President Recep Tayyip Erdoğan said at the end of the Tehran summit on Friday, attended by Russian President Vladimir Putin and Iranian President Hassan Rouhani.

Referring to the recent escalation in Idlib, Foreign Minister Mevlüt Çavuşoğlu said in a joint press conference with his Polish and Romanian counterparts yesterday: "Let's stop the civil war in Idlib. Let's work together to eliminate terrorist groups." Çavuşoğlu yesterday participated in the fourth meeting of political-military consultations among the foreign ministers of Turkey, Romania and Poland. In the trilateral summit in Tehran, Erdoğan, Putin and Rouhani had called on all terrorist groups to lay down their arms.

Meanwhile, Russian Deputy Foreign Minister Sergei Ryabkov told reporters in Moscow yesterday that the attitude of Russia and Turkey cannot be the same when it comes to Syria, while adding that both sides are still trying to find common ground despite differences.

"Turkey, just like Russia, is a country that has its own serious national priorities and benefits and takes firms steps forward. Our attitudes might not be completely similar to each other, yet, this is normal. We are trying to find major common ground in both political and military areas," Ryabkov was quoted by Demirören News Agency (DHA) as saying.