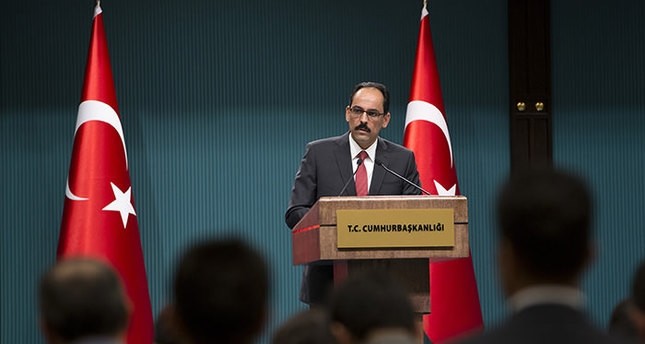 All parties agree on the necessity of a political solution for Idlib, Presidential Spokesman Ibrahim Kalın said late Friday.

Speaking after the Quartet meeting, Kalın also said that airstrikes against the war-ravaged town are totally unacceptable. "President Erdoğan's Sochi visit is of crucial importance," he added.

Representatives of Turkey, France, Germany and Russia held a preparatory meeting in Istanbul earlier on the same day for an upcoming quartet summit on Syria.

During the meeting, the representatives of the countries were expected to determine the date of the upcoming quartet summit.

President Recep Tayyip Erdoğan previously announced on Sept. 9 that the representatives would meet and that a leaders' summit might be held soon. The current situation in Idlib tops the summit's agenda.

Saying that "Turkey will neither watch from the sidelines nor participate in such a game" to "further Regime's interests," the president added that "Astana spirit" should reign in ways to find a "sustainable political solution" for the Syrian city under threat of an imminent attack from the regime forces.