Turkey ramps up efforts to prevent humanitarian catastrophe in Idlib 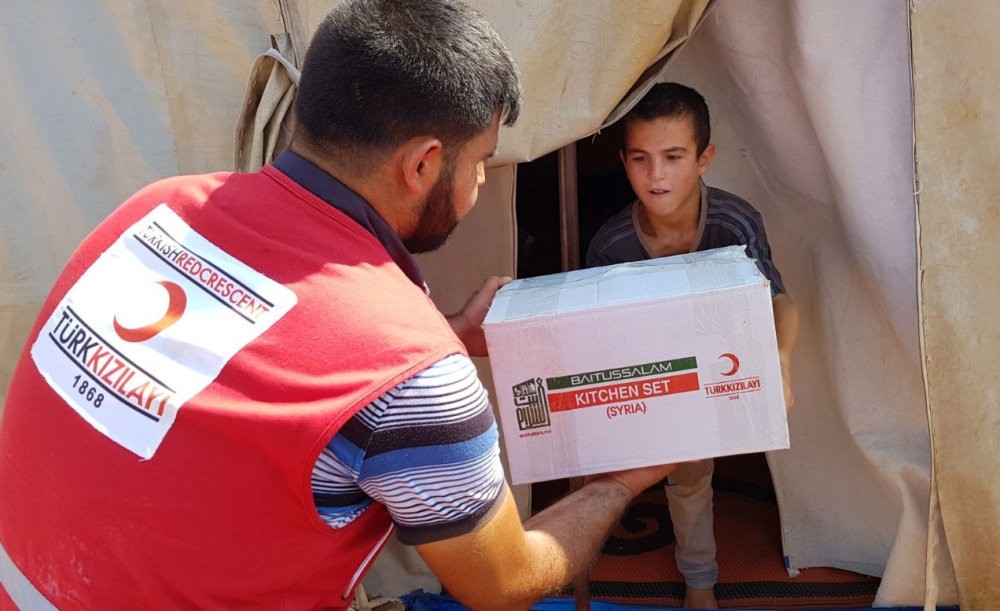 Turkey has accelerated its efforts via humanitarian organizations to prevent a possible humanitarian crisis that might be prompted by an offensive on Idlib, the last opposition-held stronghold in Syria.

The fears of a full-scale operation in Idlib by the regime and Russia, which would endanger the lives of nearly 3 million civilians, have yet to be addressed.

The need to provide safety for civilians with the current state on the ground has becoming more urgent with each passing day. For this purpose, the Turkish Red Crescent has been taking all the necessary measures at the country's border for the possible immigration wave coming from Idlib.

According to information received from Turkish Red Crescent officials, the first wave of refugees will be settled in three regions hosting refugee camp sites, namely Atme camp, the Azaz region and the Jinderes region. New tents will be added to these camps to provide shelter for Syrians fleeing Idlib.

While the delivery of tents and food from warehouses continues in the region, Turkish Red Crescent President Kerem Kınık also carried out inspections in the beginning of September.

For a possible new wave from Idlib, hundreds of new tents and food parcels have been prepared by dozens of employees and volunteers on the Syrian border.

The new wave of refugees is expected to settle in nearly 40 camps and 30,000 tent cities in Syria.

The Turkish Red Crescent has also identified new camp sites on the Syrian side of the border for possible migrations. The organization continues its efforts in coordination with the Disaster and Emergency Management Presidency (AFAD) to take any necessary measures, including providing tents, blankets, food packages and hygiene sets.

Together with the new camps established with the AFAD, the camp sites designated for the Operation Olive Branch region in Afrin and the Operation Euphrates Shield region are also being prepared for the possible migration wave with 30,000 tents is being sent to these areas.

Since 2012, the Turkish Red Crescent has been providing assistance to the region, covering the needs of people in about 40 camps in Syria. Every month, the organization delivers humanitarian assistance to nearly 150,000 people.

The Turkish Red Crescent also addresses the needs of 10,000 children in 16 orphanages.

In addition, for the possible migration expected from Idlib, the Turkish Red Crescent has carried out intense work with the Health Ministry to meet the needs of people's healthcare. The organization is also planning to provide necessary medical equipment, supplies and medicine to the three main hospitals in the region.

Meanwhile, calling for common sense in Idlib, where the tension escalates day by day, Ankara plans to bring up the issue in the United Nations General Assembly. Ankara expressed that a possible attack on the province could lead to almost 1 million people being displaced, causing a new influx of refugees that Turkey cannot ignore. Since a 2011 uprising evolved into an all-out civil war in Syria, its northern neighbor Turkey has seen an influx of millions of displaced people taking shelter in its border towns. Today, the country has more than 3.5 million Syrian refugees, the largest Syrian refugee community in the world.