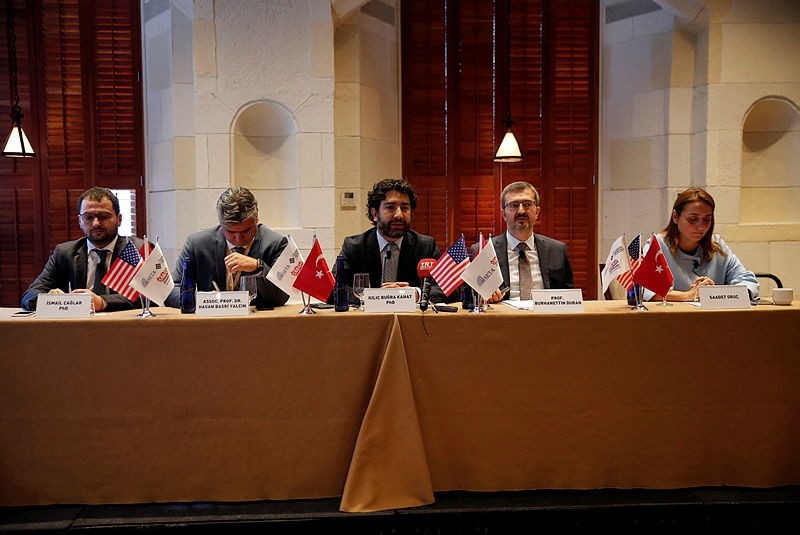 Some of the most influential minds shaping Turkish policy came together Monday for a distinguished panel, "Turkey Today," organized by The Turkish Heritage Organization (THO), Political, Economic and Social Research Foundation (SETA) and the Sabah Columnists Club at the Yale Club in New York to discuss key global issues.

Saadet Oruç, chief advisor to President Erdoğan, spoke on how Turkey is handling the ongoing Syrian refugee crisis. In her presentation titled "Human Dimension of Turkish Foreign Politics," Oruç said Turkey has doubled its humanitarian support in recent years to Myanmar, Syria and parts of Africa, while also supporting 3.5 million Syrian refugees within its borders.

Talking to Anadolu Agency, Oruç said that Turkey will not give way to terrorist groups under the excuse of fighting against Daesh in Syria, referring to U.S. support of the People's Protection Units (YPG), the PKK's Syrian affiliate.

"Turkey's vision is evident," through the country's Olive Branch and Euphrates Shield Operations, she said. "Under no circumstance will Turkey allow its borders to be compromised or threatened."

In light of the recent Sochi agreement between Turkey and Russia which foresees preserving the de-escalation zone in Syria's Idlib, Oruç said that Turkey has been an example to the world its efforts to avoid a possible humanitarian disaster in the northern province.

Panel speaker Professor Burhaneddin Duran, general coordinator of SETA, touched on Middle Eastern politics, stating that politics in the Middle East have seen dramatic political changes after the Arab Spring, reshaping the region and affecting the balance of power.

"Syria's civil war has greatly affected Turkey's regional politics," he said, adding the Middle East is in the midst of a transition period.

THO is a young non-profit organization that was founded by a group of Turkish-Americans that promotes the facilitation of academic discussion and dialogue about Turkey's international relations, especially with the U.S. The organization regularly partners with universities and other organizations to host events, programs and research to provide a platform for exploring key issues.