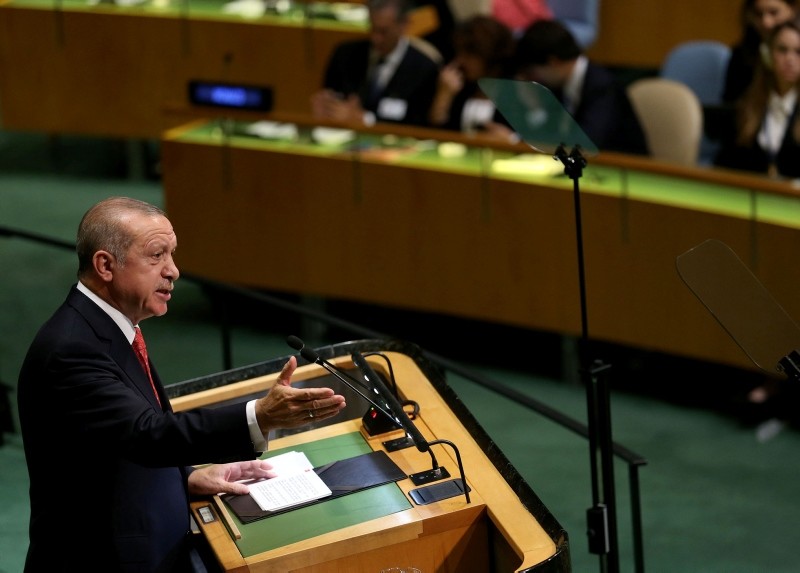 In an interview with Reuters on Tuesday while he was in New York for the annual United Nations General Assembly meetings, Erdoğan said that the current economic challenges have been exaggerated more than necessary and Turkey will overcome these challenges with its own resources.

Turkey's central bank raised its benchmark rate by 625 basis points this month, boosting the lira.​ Erdoğan said the decision was a clear sign of the central bank's independence, adding that as president he was against increasing rates.

"It shows the central bank is independent. As the president, I am against high interest rates and I am repeating my stance here again," he said, adding that high rates "primarily scare away investors."

The lira firmed slightly on Wednesday morning, after Erdogan's assurance on the independence of the central bank was published.

The president also said a Turkish court, not politicians, will decide the fate of Brunson whose detention has roiled relations between Ankara and Washington.

U.S. Secretary of State Mike Pompeo said on Monday he was hopeful Turkey would release terror-linked evangelical pastor Brunson this month. He was moved to house arrest in July after being detained for 21 months. However, Erdoğan stressed Tuesday any decision on Brunson would be made by the court.

"This is a judiciary matter. Brunson has been detained on terrorism charges ... On Oct. 12 there will be another hearing and we don't know what the court will decide and politicians will have no say on the verdict," Erdoğan said.

If found guilty, Brunson could be jailed for up to 35 years. Brunson, a pastor for the last 20 years at the Evangelic Resurrection Church in western Turkey's Izmir, was arrested on alleged links to the PKK terrorist group and the Gülenist Terror Group (FETÖ), who orchestrated an attempted coup on July 15, 2016.

"As the president, I don't have the right to order his release. Our judiciary is independent. Let's wait and see what the court will decide," Erdoğan said.

He said it was impossible for Syrian peace efforts to continue with Bashar Assad in power, adding that the withdrawal of "radical groups" had already started from a new demilitarized zone in Syria's Idlib region.

Earlier this month, Turkey and Russia reached an agreement to enforce a new demilitarized zone in Syria's Idlib region from which "radical" rebels will be required to withdraw by the middle of next month.

"This part of Syria will be free of weapons which is the expectation of the people of Idlib ... who welcomed this step," he said. The demilitarized zone will be patrolled by Turkish and Russian forces.

Close to 3 million people live in Idlib, around half of them displaced by the war from other parts of Syria

"We need to be realistic ... Am I supposed to let people freeze in winter? ...Nobody should be offended. How can I heat my people's homes if we stop purchasing Iran's natural gas?," he said.

Trump pulled the United States out of a 2015 multinational nuclear deal with Iran and in August Washington reimposed sanctions on Tehran, lifted in 2016 under the pact. U.S. sanctions on Iran's energy sector are set to be re-imposed in November.

In an effort to boost the economy and attract investors, Erdogan will travel on Sept. 28 to Germany, a country that is home to millions of Turks.

"We want to completely leave behind all the problems and to create a warm environment between Turkey and Germany just like it used to be," Erdogan said, adding that he will meet Chancellor Angela Merkel during his visit.