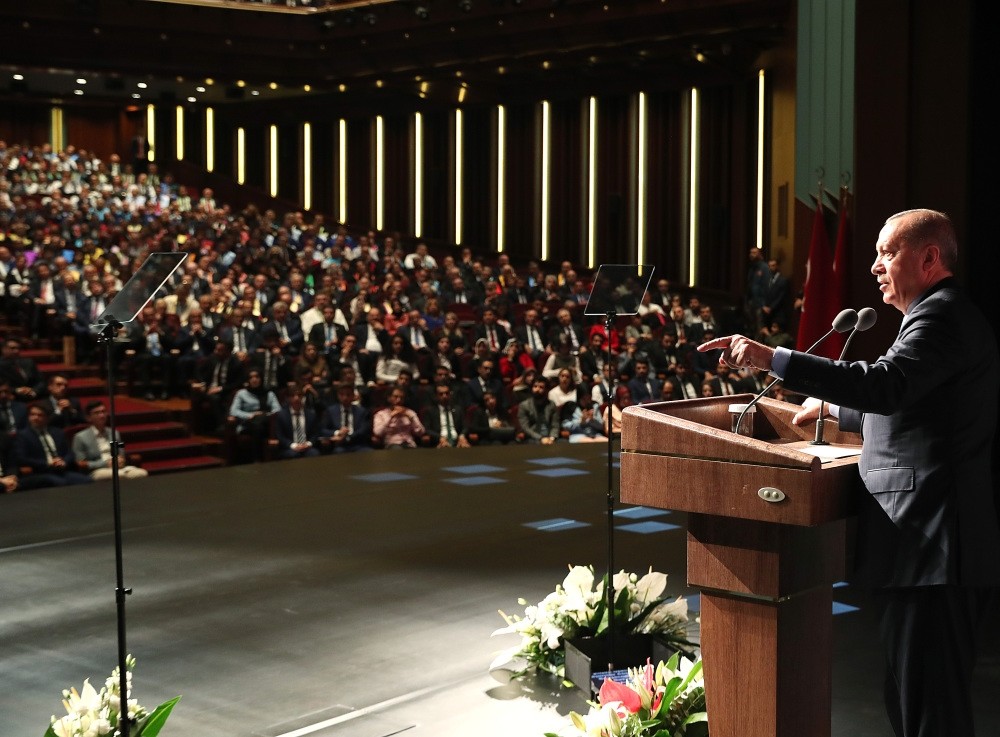 President Recep Tayyip Erdou011fan addressed Turkish academics and members of higher education institutions at the Beu015ftepe Convention and Culture Center in Ankara on the occasion of the start of the new academic year, Oct. 3.
by daily sabah
Oct 04, 2018 12:00 am

Transforming the education system with innovations and reforms according to the needs of a digital world will be vital for Turkey's bright, secure future, Erdoğan said

A strong education system is a "must have" foundation for a country seeking a secure and prosperous future, President Recep Tayyip Erdoğan said yesterday in a speech in Ankara to mark the start of the new academic year. "If we want to build a secure future for ourselves, we have to begin with education," Erdoğan said, adding that the government will focus on improving the country's education system. During the rule of Justice and Development Party (AK Party) governments in the past decade and a half, Turkey has made some significant changes to improve the quality of education and also to make it more available to the country's ever-growing youth population.

The number of new universities built has been a significant indicator of this. Currently, Turkey has 206 universities, including both public and private. More than half of those universities were built after 2002, when the AK Party took office.

Moreover, tuition fees have been lifted for university students and the number of students per class has significantly decreased across the country. Students in primary and secondary schools now receive books for free.

Erdoğan said that while some reforms and changes have developed the structure of education, the quality of teaching is an area that will be among the priorities of the new government and it is an area of opportunity for growth.

"We will fill this void in the new term as well," he said.

The president also added that a generation that is raised conscious of national interests would not be involved in activities against his or her country.

Erdoğan said the government aims to launch a massive technology initiative through the Digital Transformation Office and with the support of the private sector. He added that through the Human Resources Office, which functions under the presidency, talent matching will be done to ensure the right talent among new graduates are positioned in the most effective areas.

"Turkey must first complete its digital transformation to catch up with the era and to even go beyond it. It is not possible for a country that falls behind in technology to achieve its scientific and industrial goals," Erdoğan said.

"We trust in the intelligence, industriousness and prolificacy of our people," the president added.

Commenting on the importance of cybersecurity and information security, Erdoğan said Turkey can't have a confident position on the future in the absence of data protection in the country.

"We shouldn't forget that wars in the future will be waged with cyber weapons, not with conventional ones," Erdoğan said.

He added that Turkey has moved from being a country that sat and watched when a crisis comes to its doors to a country that follows a proactive policy and makes necessary reforms and transformations to avoid risk and secures its future against threats.

Last July, a draft presented to the Council of Ministers to boost cybersecurity, especially in public agencies, was established to appoint security experts and white hat hackers. The bill aims to widen the authority of the National Intervention Center against Cyber Attacks, a department of the Information Technology and Communication Board (BTK) that handles nationwide attacks and coordinates small teams of security experts in critical public agencies and large private corporations.

Turkey has been the target of several large-scale cyberattacks in the last 10 years.

"We know that no doors will be closed to us as long we move forward decisively with transformation, reform and innovation. Higher education in particular and education in general is where we should own transformation, innovation and reform the most," Erdoğan underlined, saying also academics would be the force pushing forward the needed changes.

The president added that through improving education in Turkey, perceptions, biases and constructed fallacies against the country abroad would also eventually change and that academics play a significant role in this.

"During our recent visits to the U.S. and Germany, we once again witnessed a reality which we constantly see. A lot of false, incorrect and misleading information about our country is in circulation in the media organs, academic circles and generally among the public of Western countries. We need to work in a spirit of mobilization for the correction of these fallacies," he added.