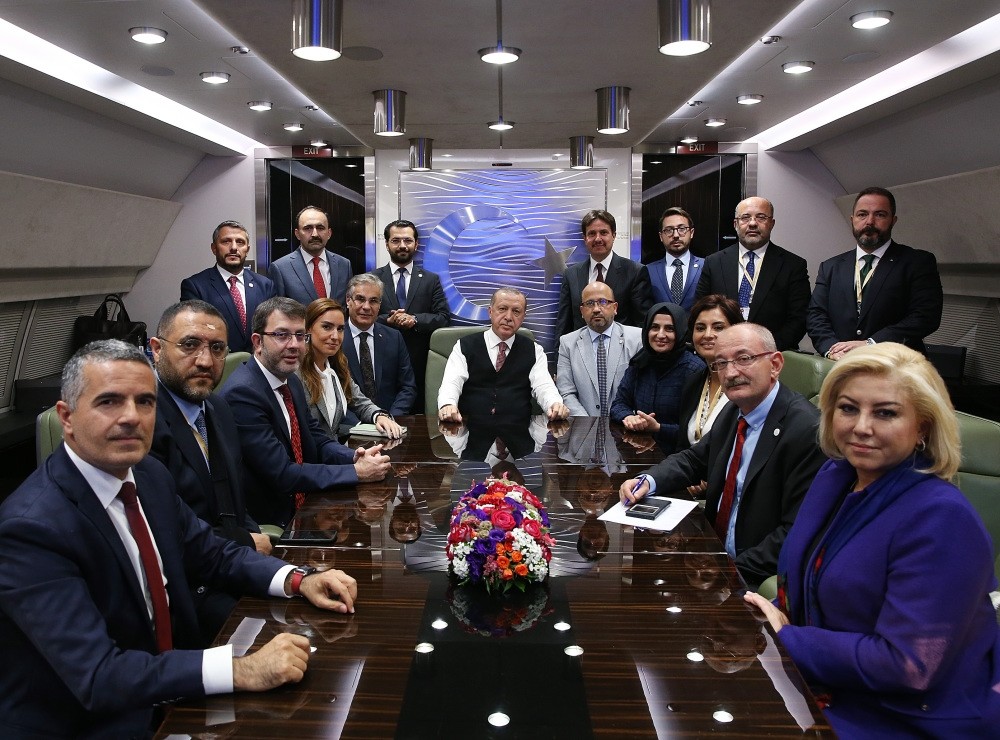 President Erdou011fan said claims by Saudi officials that the consulate cameras were not working on the day of the incident are not logical.
by Serdar Karagöz Oct 11, 2018 12:00 am

Turkish authorities are investigating the case of dissident Saudi journalist Jamal Khashoggi in all its dimensions, President Recep Tayyip Erdoğan said yesterday, while underlining that Ankara was concerned over his disappearance since Oct. 2, when he was last seen to have entered the Saudi Arabia Consulate in Istanbul.

"We are investigating the issue with its all dimensions. This is an incident that has occurred in our country. It is not possible for us to remain silent on this because this is not an ordinary incident," Erdoğan told members of the Turkish press accompanying him during his two-day visit to Hungary.

Fifty-nine-year-old Khashoggi, a Washington Post contributor, has been missing since last Tuesday after entering the Saudi consulate to gather documents for marriage. His fiancee and friends have said he did not leave the building. The dissident Saudi journalist's Turkish colleagues and several Turkish officials have voiced concerns that he was murdered in the consulate. So far, footage released shows Khashoggi entering the consulate building, however, no footage has been released showing his exit from the consulate. Saudi officials have said Khashoggi is not in the building, yet they have not been able to back their claim with security camera footage, as they said the cameras were not working that day.

"I ordered my friends, be it the Justice Ministry or the Foreign Ministry, as soon as I heard the news to look into the incident. We have been handling the issue from all dimensions, be it police or intelligence aspects and we have followed the case second by second. All the related developments, ins and outs from Turkey, have been put under the spotlight," Erdoğan added.

Responding to Saudi claims that the cameras were not functioning on Oct. 2, Erdoğan said this was not a logical explanation. "Is it possible not to have camera systems at a consulate or an embassy? Is it possible that camera systems didn't exist at the Saudi Arabia Consulate, where the incident took place? They can even catch bird or a mosquito with the advanced systems they have," the president said. Erdoğan had previously said that Saudi officials "cannot escape responsibility by simply saying that he left."

Khashoggi is a well-known critic of Crown Prince Mohammed bin Salman (also widely known as MBS) and his reform program, as well as the kingdom's policies toward Qatar and the war in Yemen. Considered a Saudi nationalist, Khashoggi previously served as editor-in-chief at the Saudi newspapers al-Arab and Watan and as media adviser to Prince Turki al-Faisal during his terms as ambassador in Washington and London.

He fled Saudi Arabia in 2017 and has been living in Washington over concerns about the Saudi government's crackdown on dissenting voices, particularly intellectuals and journalists.

Erdoğan added that Turkey has asked Saudi officials to allow Turkish authorities to investigate the incident at the consulate premises and steps have been taken within the framework of the Vienna Convention, since the Saudis have given permission to a Turkish investigation team to enter the consulate.

"It is not right to draw conclusions based on guesses, however we are concerned. We see that the United States also has the same concerns," Erdoğan also said, commenting on the remarks made by Washington on the case.

The U.S. President Donald Trump said on Tuesday he does not know anything about Khashoggi's disappearance and that he had not yet spoken with Saudi officials about the situation, a week after the journalist disappeared. "I am concerned about it. I don't like hearing about it," Trump told reporters at the White House on Monday.

U.S. Senator Tim Kaine on Tuesday called for Trump to intensify investigation efforts over Kashoggi's disappearance. "Jamal Khashoggi is a Virginia resident, so his disappearance is personal to me. President Trump needs to raise this case immediately with Saudi Arabia and Turkey and demand answers. We should be extending support from our federal agencies for a real investigation," the senator tweeted.

The agreement reached with the U.S. over Manbij province in northern Syria has not completely ended, however, it is moving slower than expected, Erdoğan said, regarding the deal reached with Washington for the withdrawal of the People's Protection Units (YPG), the PKK terrorist organization's Syria affiliate.

"There is a delay over the Manbij deal. The joint training is beginning. The process over who will administer Manbij in the post-YPG era is also continuing," Erdoğan said.

The Manbij deal between Turkey and the U.S. focuses on the withdrawal of the YPG from the city in order to stabilize the region. Both countries conducted separate coordinated patrols in the region between areas liberated by Turkey's Operation Euphrates Shield and Manbij, according to Turkish officials. Separate patrols in the region began on June 18, however, joint patrols have yet to be conducted.

Commenting on the upcoming hearing of the American pastor Andrew Brunson, Erdoğan said the process was a judicial case and that he has no power as a president to intervene in the judiciary.

"I am not in a position to intervene in the judicial process as Turkey is a country of rule of law. I am the president of the Republic of Turkey, which is a democratic republic. I have to abide by whatever the courts decide," he said.

Erdoğan added that those related to the Brunson case also need to abide by the rules of law and the courts' decisions.

Brunson, a pastor for the last 20 years at the Evangelical Resurrection Church in western Turkey's Izmir, was arrested on alleged links to the PKK terrorist group and the Gülenist Terror Group (FETÖ), who orchestrated an attempted coup on July 15, 2016; however, he was later put on house arrest. On Oct. 12 he will be standing in front of the court for a hearing.

U.S. officials have demanded his immediate release, a call Ankara has considered as interfering in the judiciary of Turkey as a sovereign country.

CHP STAKES IN İŞ BANK TO BE TRANSFERRED TO TREASURY

Erdoğan also discussed the stakes of main opposition party Republican People's Party (CHP) in İş Bank. He said they would be transferred to the Treasury with a regulation that would be imposed in the future.