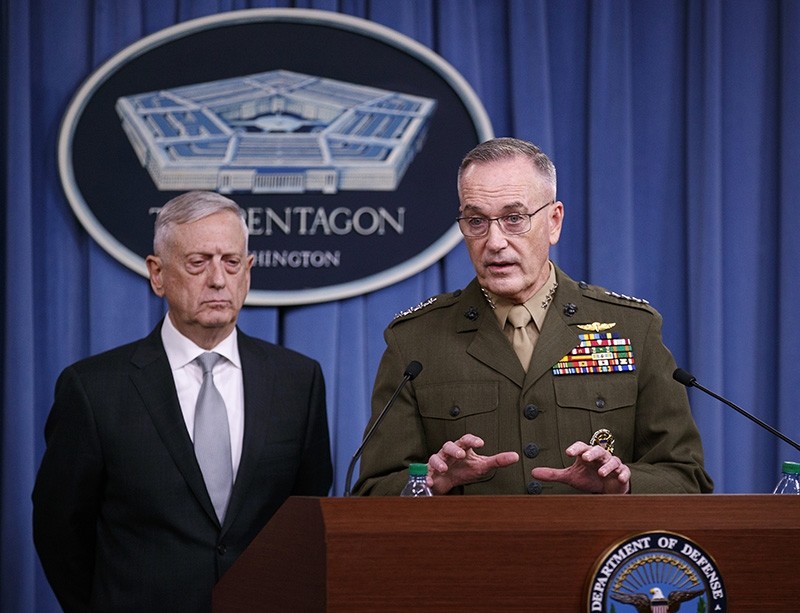 U.S. Chairman of the Joint Chiefs of Staff Gen. Joseph Dunford said Tuesday the directive to ensure security in Syria's Manbij has been fulfilled and political screening there would begin soon.

"We believe that we have fulfilled the directive to ensure security in Manbij. We will soon be screening people in Manbij in the political section," Dunford told Pentagon reporters at a conference on countering violent extremism, alongside Brett McGurk, Washington's special envoy for combatting Daesh.

When asked by an Anadolu Agency reporter about the ongoing U.S.-Turkey coordination in Manbij, Dunford said the issue at hand now is carrying out joint patrols, stating that the directive given by President Recep Tayyip Erdoğan and U.S. counterpart Donald Trump to secure the region has been completed.

"As for joint patrols – first, how to perform patrols, how to command and control. We need to develop a staff plan, including what will be the rules of engagement. Then we have to train the people we have chosen to perform these joint patrols," Dunford explained.

Dunford argued that there is not an urgent timetable for the Manbij patrols.

"Obviously, we are moving forward with rational steps. This is not an urgent issue. The urgent security issues were addressed immediately," he said.

Dunford met with Turkish Chief of Staff Gen. Yaşar Güler in Washington on Monday, the leaders second meeting in three weeks, to discuss security and stability in Manbij and cooperation in the fight against terrorism.

At the beginning of the month, Turkish and U.S. forces began training for joint patrols in the northern Syrian city of Manbij in line with a deal focusing on the withdrawal of the PKK-affiliated People's Protection Units (YPG) terror group from the city in order to stabilize the region.

Turkey had long been warning the U.S. against what Turkish officials have described as a "reckless attitude in northern Syria's Manbij" and its arms support to the YPG. Turkey repeatedly stressed that supporting terror groups with arms would eventually create serious security threats.

Relations with the U.S were heading for a rupture before the two sides reached an agreement that focuses on the withdrawal of terrorist YPG/PKK forces from the city to stabilize the region. However, YPG forces have yet to withdrawal from Manbij.

President Erdoğan on Tuesday expressed impatience at the U.S. delays in purging the YPG east of the Euphrates, saying Ankara would take action itself if Washington continues to support the terror group there.

The YPG is the dominant group in the U.S.-backed Syrian Democratic Forces (SDF), which controls almost all the territory east of the river comprising some one-third of the territory of Syria, except for the Assad regime-controlled area near Deir ez-Zour and the Daesh-held area near the Iraqi border. The SDF also controls the districts of Manbij and Tabqah on the right bank of the river.