Circle tightens on Saudis after inconsistent statements over Khashoggi killing 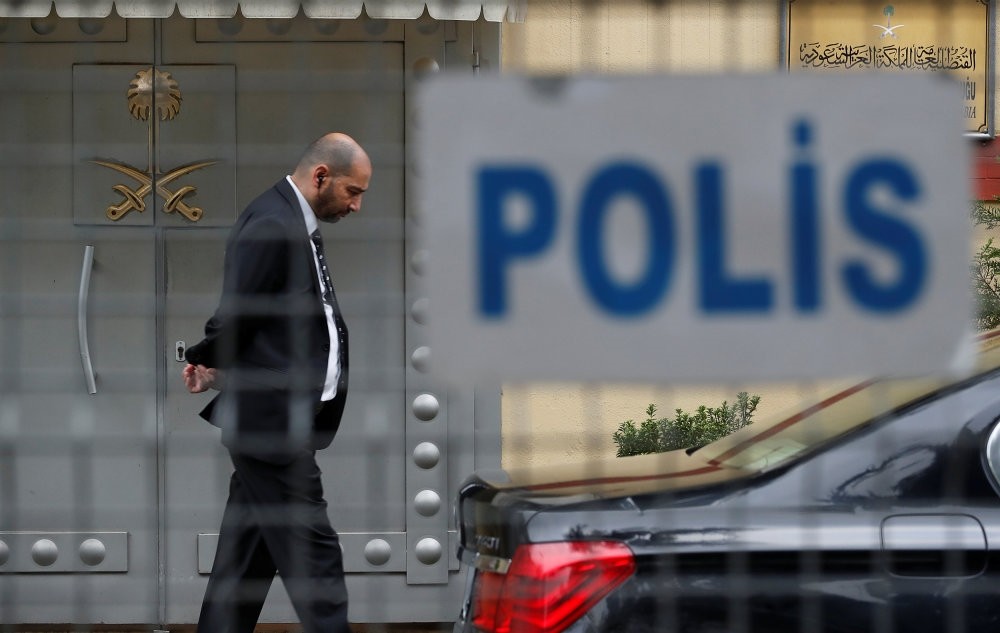 After a controversial statement over journalist Jamal Khashoggi's killing in the Saudi Consulate in Istanbul suggesting "he was killed in a brawl," pressure grows on the Saudi administration, particularly on Crown Prince Mohammed bin Salman (MBS), to reveal the truth behind the murder, with some countries hinting at sanctions against the kingdom.

President Recep Tayyip Erdoğan and U.S. President Donald Trump agreed on a phone call late Sunday that all aspects surrounding the death of Khashoggi need to be brought to light, according to a statement by the Turkish presidential press office.

Saudi Arabia, after weeks of denial, finally admitted Saturday that Khashoggi was killed in the country's Istanbul consulate on Oct. 2, the day he entered the consulate. Riyadh's explanation that Khashoggi, a well-known critic of Saudi policies, was killed in a brawl in the consulate has been criticized on social media, and been met with international skepticism with allegations of a cover up designed to absolve MBS of direct responsibility.

Erdoğan said on Sunday he would reveal the "truth" about the Khashoggi case today while Turkish officials vowed to pursue the case after Saudi Arabia's admission of guilt. The Khashoggi case was also discussed during the Cabinet meeting in Ankara yesterday.

"We are faced with a carefully organized murder. The Republic of Turkey is a reliable state that seeks to provide legal evidence for each and every claim," the ruling Justice and Development Party (AK Party) Spokesperson Ömer Çelik told reporters yesterday.

"The diligence of Turkey is about backing its claim with legal evidence," Çelik said.

Speaking on the murder, Eskişehir deputy of the main opposition Republican People's Party (CHP), Utku Çakırözer, said that Turkey, the EU, Western countries and the civilized world should take a joint stance against Saudi Arabia on imposing sanctions and preventing attempts to cover up the killing.

The state-run Saudi Press Agency announced the calls to Khashoggi's son, Salah, yesterday. Statements from the agency said both King Salman and MBS expressed their condolences for his father's death.

The call comes after a leaked photograph apparently taken from surveillance footage shows Maher Abdulaziz Mutreb, a member of MBS's entourage on his trips to the United States, France and Spain this year, at the consulate, just ahead of Khashoggi's arrival. Mutreb's name also matches that of a first secretary who once served as a diplomat at the Saudi Embassy in London, according to a 2007 list compiled by the British Foreign Office.

Saudi Arabia so far has not acknowledged or explained Mutreb's presence in Istanbul - nor that of a forensics and autopsy expert, also on hand for Khashoggi's arrival at the consulate.

Turkish authorities continue to find new evidence in the Khashoggi probe as the investigation continues.

Turkish police yesterday found a car belonging to the Saudi consulate and bearing diplomatic plates in a private parking lot in Istanbul's Sultangazi district, where it had been parked for several days after the journalist's disappearance. Following the Cabinet meeting yesterday, Presidential Spokesperson İbrahim Kalın said the necessary investigation will be conducted over the vehicle which has been found and the information will be shared with the prosecutors.

Kalın also added that it is not a bilateral issue between Turkey and Saudi Arabia and that the incident will be handled according to the rules of international law and Turkish domestic law. He added that while for Turkey, relations with Saudi Arabia are important, Saudi officials are required to reveal the truth about the Khashoggi case.

Turkish authorities also told CNN yesterday that a member of the hit squad suspected in the murder of Khashoggi was captured on surveillance cameras on the streets of Istanbul dressed up in the journalist's clothes, a fake beard and glasses on the day he was killed. The exclusive footage, which is part of the investigation led by the Turkish government, shows the body double leaving the Saudi consulate premises from the rear entrance after Khashoggi entered on Oct 2. He was later spotted at the Blue Mosque in the Fatih district.

Mustafa al-Madani, the body double who is of similar build and height as Khashoggi, was identified by a Turkish official as one of the members of the 15-man hit squad deployed to murder the prominent journalist.

Turkish media and officials had reported that a 15-member Saudi team flew to Istanbul, laid in wait for Khashoggi at the consulate and then cut off his fingers, killed and dismembered the 59-year-old writer.

Meanwhile, five Turkish employees of the Saudi consulate in Istanbul are giving statements as witnesses under an investigation into the killing of Khashoggi, Turkish broadcaster NTV said yesterday.

Twenty consulate workers, including the consul's driver, gave statements to prosecutors in relation to the incident last week, NTV reported. Prosecutors are reportedly seeking statements from a total of 45 employees.

Pointing out that he did not feel as though any extraordinary event had occurred on Oct. 2 and that he was not sent outside of the consulate for additional duty, the witness said that he didn't see Khashoggi or the Saudi team.

The driver also indicated that his working hours were between 9 a.m. and 3:30 p.m. and he left the consulate at the end of his shift.

Last week, a total of 23 consulate employees had also spoken to prosecutors. The remaining 17 personnel - both Turkish and foreign nationals - are expected to appear at the courthouse for submitting their testimony as part of the Istanbul Chief Public Prosecutor's Office's probe.

Growing signals of an arms embargo

Along with the persistent demands from international actors to the Saudi government to reveal the truth about the killing, the first signals of possible sanctions, including arms sales, were given by European countries on Sunday.

Chancellor Angela Merkel on Sunday condemned Khashoggi's killing, adding that Germany can no longer sell arms to Saudi Arabia in such circumstances.

"First, we condemn this act in the strongest terms," Merkel said in a news conference during a campaign for the upcoming regional elections. "Second, there is an urgent need to clarify what happened - we are far from this having been cleared up and those responsible held to account... As far as arms exports are concerned, those can't take place in the current circumstances."

Germany's Foreign Minister Heiko Maas had called on Saturday for a halt to German arms exports while the investigation into Khashoggi's death continued.

It was not just Berlin that hinted at tangible action against the Saudi government. Along with Germany, the Khashoggi case has opened serious rifts for Riyadh with other European partners like Britain and France. While the three countries had issued a joint statement saying that Saudi Arabia must clarify how Khashoggi died inside its Istanbul consulate, and its account must "be backed by facts to be considered credible," British Prime Minister Theresa May came under growing pressure to halt British arms sales to Saudi Arabia.

"Our indulgence of the Saudi monarchy has gone on long enough. We should be looking again at selling arms to Saudi Arabia, given the way in which they're behaving in Yemen, given that they are bombing weddings and funerals," Emily Thornberry, the opposition Labour Party's shadow foreign secretary, told the BBC.

The killing of Khashoggi dealt a heavy blow to MBS's image. The crown prince has spent billions to portray himself as a moderate reformist. His image has already suffered due to the Saudi military intervention in neighboring Yemen that began in 2015, which has claimed the lives of thousands of people and turned into a humanitarian crisis, along with some diplomatic rifts including one with Canada over a human rights dispute.

Boris Johnson, former foreign secretary in May's Conservative government, also urged Britain and the U.S. to "take the lead in holding Saudi Arabia to account" following the "sick and bizarre" murder of Khashoggi.

Britain's arms sales to Saudi Arabia accounted for 49 per cent of its total arms exports over the last five years, the Stockholm International Peace Research Institute (SIPRI) reported in March.

"We won't, at this point, approve any further arms exports because we want to know what happened. For me, it is important to reach a joint European position... because only if all European countries agree will this make an impression on the government in Riyadh," he told ZDF television.

Previously, 22 U.S. Republican and Democrat senators had sent a letter to the Trump administration to investigate the Khashoggi case by invoking the Global Magnitsky Act of 2016. It would mean triggering a human rights probe that could result in sanctions in 120 days against Saudi officials and entities. After growing pressure, Trump said Friday that the U.S. may consider sanctions against Saudi Arabia over the Khashoggi case.

A statement released by the French presidency called the journalist's death "tragic," and added that the two presidents held a phone call Sunday, without providing more details.