15 member Khashoggi hit squad: Who are they? 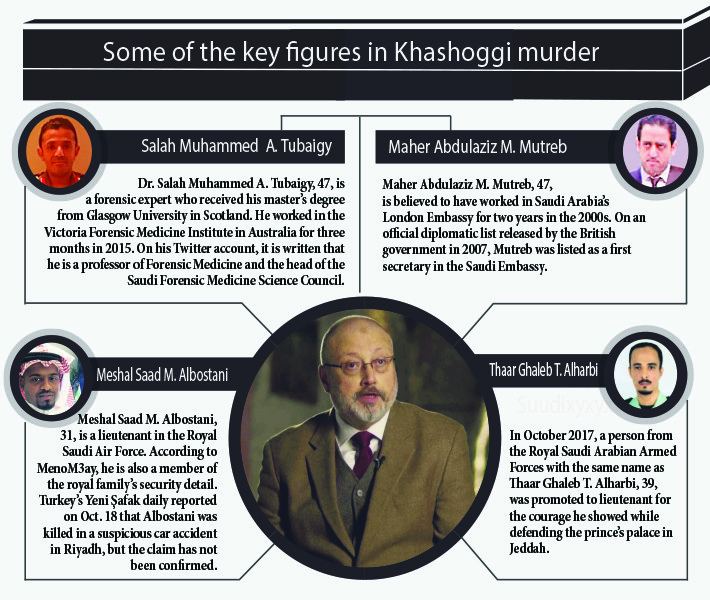 As the truth regarding the disappearance of Saudi journalist Jamal Khashoggi is revealed, the importance of the people believed to have been involved in the crime increases. At the center of this crime is a so-called hit squad consisting of 15 people, all Saudi citizens known to have arrived in Turkey the day Khashoggi was murdered. Although the details of the murder remain unclear, the identities of the 15 provide clues about the structure of the crime, now known to have been premeditated.

According to The New York Times, 31-year-old Abdulaziz Mohammed M. Alhawsawi is a member of the security detail that travels with the crown prince.

MenoM3ay reveals Khalid Aedh G. Alotaibi, 30, as a member of the royal family's security detail. According to The Washington Post, a person with the same name entered the United States at the same time as members of the Saudi royal family when they visited the country.

In 32-year-old Naif Hassan S. Alarifi's Facebook page, there are photos of him in a Saudi Special Forces uniform. According to MenoM3ay, Alarifi is an official who works for the crown prince. 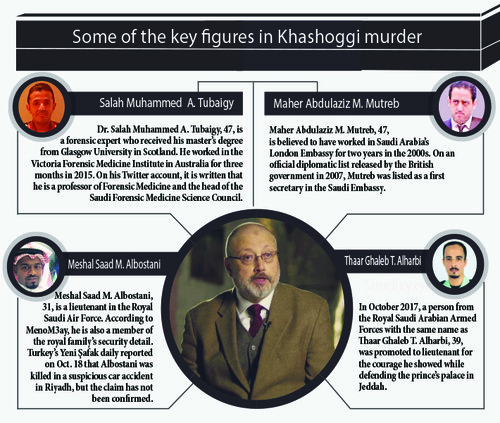 According to MenoM3ay, Mustafa Mohammed M. Almadani, 57, is a member of Saudi intelligence.

According to Saudi media, Waleed Abdullah M. Alsehri, 38, a member of the Royal Saudi Air Force, was promoted to wing commander last year.

According to MenoM3ay, Mansour Othman M. Abahussain, 46, is a member of Saudi intelligence.

A Saudi daily, on the other hand, introduces someone of the same name as a colonel at Saudi Civil Defense in 2014.

MenoM3ay reveals Fahad Shabib A Albalawi, 33, as a member of the royal family's security detail.

According to MenoM3ay, Badr Lafi M Alotaibi, 45, is a colonel in Saudi Arabia's General Intelligence Presidency.

The Washington Post has reported that Saif Saad Q. Alqahtani, 45, works for the crown prince.

There is no information on Turki Muserref M. Alsehri other than he is believed to have been born in 1982.