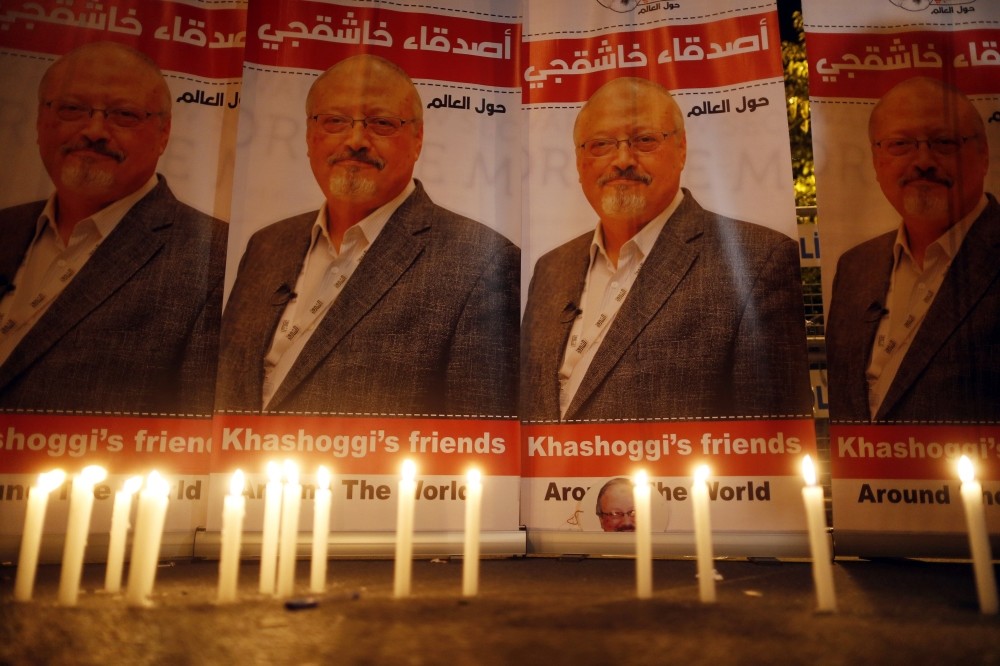 Candles lit by activists, protesting the killing of Saudi journalist Jamal Khashoggi, are placed outside Saudi Arabia's Consulate in Istanbul during a candlelight vigil, Oct. 25.
by Daily Sabah Nov 02, 2018 12:00 am

Ankara has reiterated its determination to uncover the details of the Khashoggi case despite the Saudi authorities' reluctance to cooperate, urging for a reliable investigation

As Saudi Arabian authorities continue to decline to cooperate, Turkey has firmly said that it is determined to not let the case of missing Saudi journalist Jamal Khashoggi be covered up. "This is an international case and it cannot be covered up," Justice Minister Abdulhamit Gül said yesterday, underlining that the responsibility cannot be avoided. Khashoggi, a 59-year-old Washington Post contributor, was killed and disposed of after entering the Saudi Consulate in Istanbul on Oct. 2 to obtain paperwork ahead of his upcoming wedding. His body has not yet been found.

"We expect the Saudi authorities to engage in close cooperation on this issue. They need to [offer] support in the form of cooperation in order to enlighten [us about] the whole incident," Gül told reporters during a joint news conference with his Hungarian counterpart Laszlo Trocsany in Ankara.

Khashoggi was strangled to death as soon as he entered the Saudi Consulate in Istanbul and his body was dismembered and disposed of in accordance with plans drawn earlier, the Istanbul Chief Public Prosecutor's Office said Wednesday.

The announcement came on Wednesday as Saudi Arabia's Attorney General Saud al-Mojeb completed inspections related to the killing of Khashoggi in Turkey. Al-Mojeb arrived in Istanbul early Monday to discuss the investigation with Istanbul Chief Public Prosecutor İrfan Fidan and members of the Turkish intelligence agency.

Gül said that despite written questions asked by Turkey's Chief Public Prosecutor's Office, no answers have been given by Saudi officials.

"We expect these questions to be answered as soon as possible. The Turkish judiciary will also deepen the investigation to answer these questions," he added.

Answering questions about whether the Istanbul chief public prosecutor will visit Saudi Arabia as part of the Khashoggi probe, Gül said that it is "likely not happening because the incident occurred in Turkey."

"Without Turkey's questions being answered, I think it is not right to enter into a new stage," he added.

The Saudi side's reply also rejected that there was a statement about a local accomplice from Turkey.

President Recep Tayyip Erdoğan also previously stressed that all details of the case should be revealed, including who gave the instruction for the "premeditated murder."

"Although we are not blaming anyone in advance, we will not let anything [regarding this case] be covered up," AK Party Spokesperson Ömer Çelik also said on Wednesday, adding that since the case took place within the borders of Turkey, the judgment process should also take place here.

Regarding the denial of Saudi authorities of a local collaborator, the official said that it has not been considered as a realistic statement by Turkey.

Apart from Turkey's determination on revealing all the truths of the case, the EU also insists that a transparent investigation should be conducted over the issue.

EU Commission Spokesperson Maja Kocijancic said yesterday that a transparent and reliable investigation should be conducted on the Khashoggi case.

ed Wednesday that they hoped Saudi Arabia would cooperate with the investigation and reveal the full truth about the matter so those responsible could be punished.

The British government also keeps its position for the violent killing of Khashoggi, the country's Foreign Office said yesterday.

Upon a request by the Anadolu Agency (AA), the British Foreign and Commonwealth Office (FCO) said that the most recent statement by British Foreign Secretary Jeremy Hunt in the House of Commons is still up-to-date.

On Tuesday, Hunt told British lawmakers that if the reports on Khashoggi killing are proven correct, this would not be compatible with their values, a statement he repeated on Wednesday at the parliament's foreign affairs committee.

"There are all sorts of issues with respect to Saudi Arabia's human rights record that are in sharp relief at the moment," he said.

"But… I have spoken more clearly than any Western foreign minister that if the Khashoggi stories turn out to be true, that would be inconsistent with our values," he added.

U.S. State Department Spokesperson Robert Palladino also said yesterday that they are continuing to collect information on the case and urged for a transparent investigation.

Speaking on the issue, U.S. President Donald Trump, on the other hand, said Wednesday that the Saudis did not betray him.

"They [the Saudis] did not betray me but maybe betrayed themselves. We will see how things will end up," Trump said.

Meanwhile, the former intelligence head of Saudi Arabia, Prince Turki bin Faisal Al Saud, whom Khashoggi previously worked for as a consultant, said yesterday that due to the Khashoggi case, U.S.-Saudi relations are under threat. He recalled the long history of the two countries' ties and also said that the case is making Saudi Arabia look like the "devil."

The case has brought near unprecedented international scrutiny on Saudi Arabia and its powerful Crown Prince Mohammed bin Salman, whom Khashoggi had openly criticized.