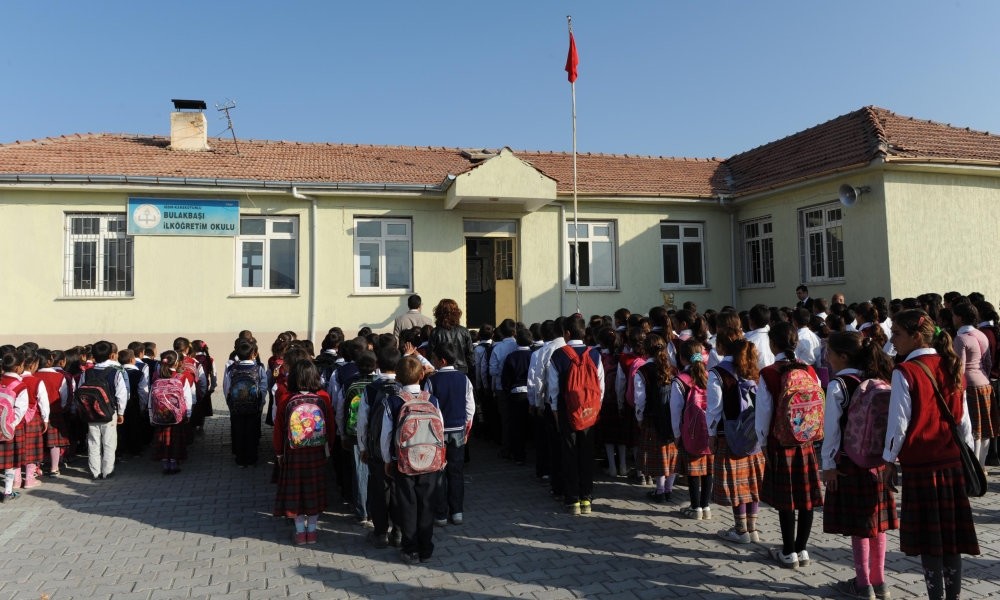 Although it has been five years since primary school students were required to take a special oath full of nationalist rhetoric every morning, Turkey is still arguing about whether or not the old ritual should return. This has become one of the hottest controversies in the country right now thanks to a recent judiciary decision to bring the oath back. The debate also resurrected old discussions on nationalism and child-rearing. Aside from all the discussions, experts argue that such a military-style activity actually negatively impacts children's individual development.

"These kinds of indoctrination and forced oaths would not cause a [positive] change in the [child's] behaviors but would cause a reaction instead," Mehmet Teber, a clinical psychologist and a pedagogue said, implying that there can be a reverse effect on the children.

The oath, introduced during the single-party era in 1933, is a nationalist-themed text that was recited by elementary and high school students every morning, followed by a flag-raising ceremony and recitation of the national anthem. During the ritual, a student was picked every morning to dictate the lines of the oath and the others would repeat his/her words.

On Oct. 19, the Council of State, the highest administrative court in Turkey annulled the Ministry of Education's 2013 directive of canceling the oath from being recited in schools. The annulment was followed initially by a debate between the ruling Justice and Development Party (AK Party) and the Nationalist Movement Party (MHP).

The practice, criticized by many for being militaristic and authoritarian, was discontinued in 2013. It is, for many, including Teber, a reflection of an aim to achieve a military society which was the main project of a certain era in the early years of the republic.

Just like in the military, the activity of taking a student oath is also full of standardized rituals and even turning the schools into 'small barracks,'" as Teber said.

According to Teber, although it can be an honoring experience and a self-esteem boost for the student leading the oath, the benefits of it are debatable for the children who are forced to repeat the same activity every morning.

"A person takes an oath in his/her life time for five to 10 times at most. Taking an oath everyday empties the meaning of the oath. Besides, children are already honest beings who love their elders and do not have any problems with their country. It is not right for them to take an oath on something they already are," Teber said.

The text of the oath is full of indoctrination. Its first line is as follows, "I am a Turk, honest and hardworking." This line is followed by the five other lines that are saying that the principles of the one who takes this oath are protecting the young and respecting elders while, the ideal is to rise and progress. The oath finishes by saying "My existence shall be dedicated to the Turkish existence."

"In my opinion, there is no pedagogic value in taking an oath without internalizing its meaning just like a parrot. Of course, we should instill our children to be right, honest and to love their country. However, this cannot be achieved by saying every morning 'I take an oath to love my motherland,'" he added.

When it comes to the effects of the oath on society, Teber said that the biggest effect is probably the fact that it raised standardized individuals who obey the state and the authority.

"While the world is leaning toward being a multicultural place, we should be careful about the rhetoric we use when we are learning to coexist. Discriminatory rhetoric is not healthy and prepares a base for possible ethnic conflicts within the country in the future," Teber said. "Let us leave children to decide for themselves on who to love more from their essence and what to devote their existence to," he added.

However, it has been also argued that the pieces like student oath are needed to raise proper generations, to establish a notion of a nation. "Every nation has certain ceremonies. It [the oath] has both a symbolic meaning and I believe that the emphasis on the nation is important in education," Oğuzhan Bilgin, a political analyst, said.

Bilgin also states that the criticism toward the oath, claiming that it is a racist statement, are unfair."The usage of the notion Turk in the national oath does not refer to a race or an ethnicity. It refers to a nation. It identifies a common identity," Bilgin said.

In early 2013, under then-Prime Minister Recep Tayyip Erdoğan, the Turkish government launched an initiative publicly known as the resolution process to end the decades-old conflict with the PKK, whose terrorist campaign has claimed the lives of more than 40,000 people over 30 years.

The process stalled in 2015 after the murder of a number of police officers and soldiers, which the PKK claimed responsibility for.

"Thus, there is a demand from the society to bring it back," said Bilgin, since there is no resolution process anymore and it was a failure for many.