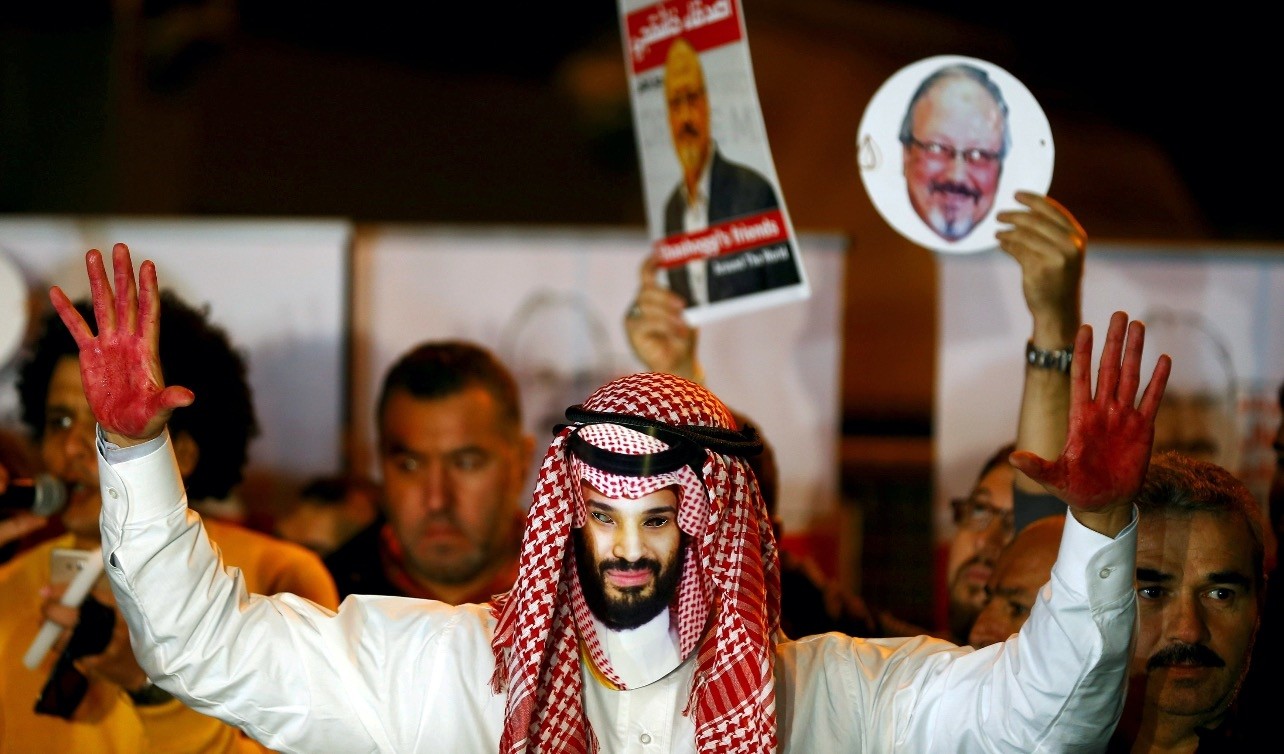 A demonstrator wearing a Mohammed bin Salman mask attends a protest outside the Saudi Consulate in Istanbul, Oct. 25.
by Daily Sabah Nov 19, 2018 12:00 am

As more and more details of the Khashoggi killing come to light, accusations that Saudi Crown Prince Mohammed bin Salman is the central figure in the case are also growing

Saudi Crown Prince Mohammed bin Salman (MBS) has been under the international community's spotlight ever since the killing of dissident journalist Jamal Khashoggi. MBS is considered to be the key suspect as every new development on the case points to him. Since Oct. 2, when Khashoggi, who was known for being a critic of MBS, entered the Saudi Consulate in Istanbul and disappeared shortly thereafter, new pieces of evidence have been emerging every day, slowly but surely lighting up the dark spots of the case while increasing the pressure on Saudi Arabia, particularly on MBS. The latest evidence came on Friday from the U.S. Central Intelligence Agency, which stated that it has concluded that MBS ordered the assassination of Khashoggi.

"In reaching its conclusions, the CIA examined multiple sources of intelligence, including a phone call that the prince's brother Khalid bin Salman, the Saudi ambassador to the United States, had with Khashoggi, according to people familiar with the matter who spoke on the condition of anonymity to discuss the intelligence," The Washington Post reported in a piece.

The Post, citing unnamed sources, reported that U.S. intelligence agencies reviewed a phone call that the prince's brother, Khalid bin Salman, had with Khashoggi. The newspaper said the prince's brother, who is the current Saudi ambassador to the United States, told Khashoggi he would be safe in going to the Saudi Consulate in Istanbul to retrieve the documents he needed to get married. The newspaper said it was not known whether the ambassador knew Khashoggi would be killed. But it said he made the call at the direction the crown prince, and the call was intercepted by U.S. intelligence.

Fatimah Baeshen, a spokeswoman for the Saudi Embassy in Washington, said that claim was false. Baeshen said the ambassador did not discuss with Khashoggi "anything related to going to Turkey."

Still, the statement also announced that a travel ban was imposed on his former top aide Saud al-Qahtani. It is thought that al-Qahtani, who is known as the "right-hand man" of MBS, had met the team that was ordered to repatriate Khashoggi ahead of their journey to Istanbul and briefed them on the journalist's activities.

The top prosecutor's office also announced that 21 individuals had been taken into custody over the killing and that charges had been set against 11 of them. Five of them face possible execution for the murder, according to the prosecutor.

Following the statements of the Saudi prosecutor's office, the U.S. Treasury rolled out sanctions against 17 Saudis, including al-Qahtani, as well as the Saudi Consul General Mohammed al-Otaibi.

US makes distinction between MBS and Khashoggi case

However, despite imposing sanctions, the U.S. has mostly sheltered the crown prince from criticism.

President Donald Trump told reporters on Saturday that when it came to the crown prince, "as of this moment we were told that he did not play a role. We're going to have to find out what they have to say."

Previously, National Security Adviser John Bolton also said that people who have listened to an audio recording of the killing do not think it implicates the crown prince.

Trump further said that Saudi Arabia was "a truly spectacular ally in terms of jobs and economic development."

"I have to take a lot of things into consideration" when deciding what measures to take against the kingdom, he said.

Saudi Arabia is a critical ally of the U.S., not only for its economic resources but also for Washington's regional goals of countering Iran and brokering a so-called peace deal between Israel and Palestine.

Trump also said yesterday that he doesn't want to hear the "suffering" Khashoggi tape, referring to the audio recordings of the killing that was provided by Turkey to several countries, including the U.S., Canada, Germany and Saudi Arabia.

The U.S. State Department also released a statement on Friday, saying that "the United States government is determined to hold all those responsible for the killing of Jamal Khashoggi accountable."

The statement also denied the Post's report on the CIA's conclusions over the case.

"Recent reports indicating that the U.S. government has made a final conclusion are inaccurate. There remain numerous unanswered questions with respect to the murder of Mr. Khashoggi," the statement added.

Meanwhile, in light of these developments, a top White House official responsible for American policy toward Saudi Arabia, who is known for her insistence on taking tough measures against the Saudi government, resigned on Friday. Kirsten Fontenrose was recently in Riyadh regarding the sanctions that were given to those who are responsible for the killing of Khashoggi.

According to The New York Times, she was advocating for al-Qahtani's addition to the list, suggesting that her resignation may came as a result of differences in approach to Saudi Arabia within the U.S. government.

In contrast to the U.S.' backward approach to Saudi Arabia and MBS, Turkey has kept up pressure on the kingdom by releasing evidence of the killing that places MBS inexcusably close to the crime.

So far, Turkey has not accused anyone of directly ordering the killing, though President Recep Tayyip Erdoğan has excluded King Salman from the possible suspects, who (the suspect) Turkey says is a high-level figure in Riyadh. Erdoğan also held a phone call with Trump over Khashoggi's murder, the Turkish presidency said in a statement late Friday. The presidents agreed that all aspects of Khashoggi's killing must be uncovered and the case should not be covered up.

Turkey, however, is not alone in pressuring Saudi Arabia over the killing. The European Union also reiterated its calls on Saturday for an investigation into the murder of Khashoggi.

"The European Union has been clear since the beginning on its call for a thorough, credible and transparent investigation into the murder of the Saudi journalist Jamal Khashoggi," European foreign ministers said in a statement that agreed with EU Foreign Policy Chief Federica Mogherini.

"The EU took note of the announcement by Saudi authorities on Nov. 15 on the latest developments in their investigation, yet the need remains to shed full clarity on the circumstances surrounding this horrendous crime as well as to ensure accountability for all those responsible for it," said the statement tweeted by the German Foreign Ministry in Berlin. "Together with our international partners we will watch closely the result of the investigation and we will continue to stress that the Kingdom of Saudi Arabia must put into place measures to ensure that something like this can never happen again," it added.

Meanwhile, an Egyptian woman claimed that she married Khashoggi months before he came to Istanbul to collect the documents that would have enabled him to marry his Turkish fiancee Hatice Cengiz.

According to the Post, the woman, who is mentioned as "H. Atr," and Khashoggi got married through a religious ceremony in the U.S. this year. The photographs of the ceremony were also provided to the Post. However, the Post stated that the marriage seemed to be kept secret from Cengiz.

Speaking to the Post on the matter, Cengiz said, "Jamal never told me about this woman." "Why is she trying to change the picture people have of Jamal? What does she want?" she said. "I suspect that this is an attempt to discredit him and hurt his reputation."

H. Atr, however, told to the Post that she has provided photos and other evidence of her marriage to Saudi and Turkish officials at a consulate in the Middle East.