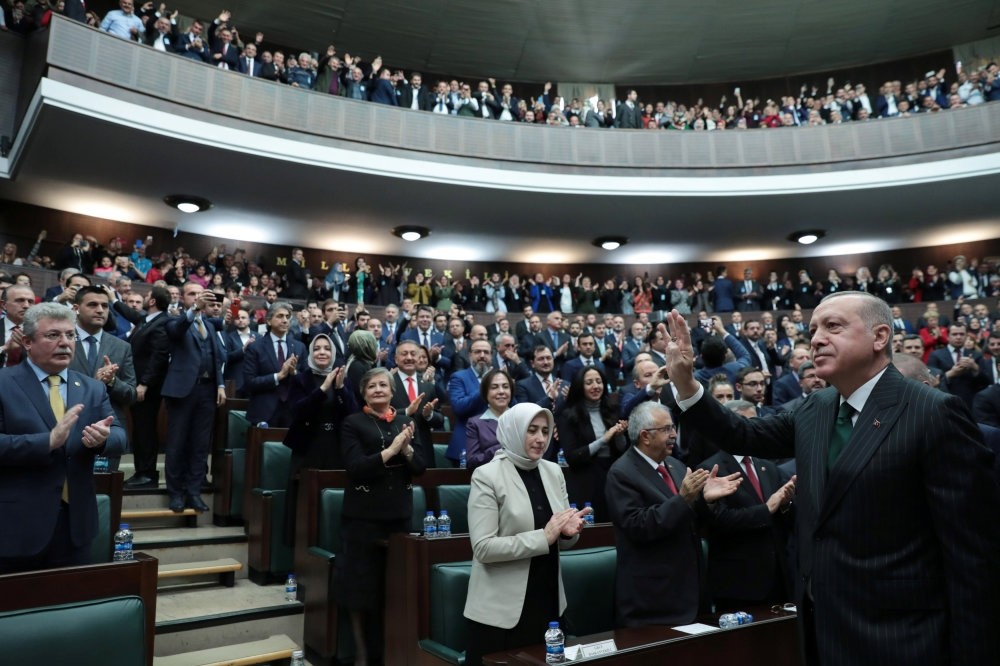 President Recep Tayyip Erdou011fan greets deputies from his ruling AK Party during a meeting in Parliament in Ankara, yesterday.
by Daily Sabah Nov 21, 2018 12:00 am

The AK Party has no place for those who put their interests before the party's cause, Erdoğan told the party's lawmakers in Parliament ahead of the March 2019 local elections

The ruling Justice and Development Party (AK Party) Chairman, President Recep Tayyip Erdoğan yesterday warned his fellow party members that the AK Party was a cause-centered party and that it was not a place for those who were motivated by personal interests. "Any level in politics is a tool for us to serve the people," Erdoğan said during his address to the AK Party group meeting in Parliament, where he stressed that AK Party interests come before personal interests and that this must be the mindset of members at all levels ahead of the upcoming March 2019 municipal elections.

Parties have already begun to announce their candidates for the upcoming local elections, a process which many intraparty rivalries take place in as competing for key electoral districts heats up among those who are willing to run for mayor.

"[The] candidate selection process is a race for who would serve the people better. Sometimes more than one person desires a role. When a person is picked as a candidate, other fellows back him. Whoever turns their back to the party or seeks other options when not being picked as a candidate, that means that person was never an AK Party loyalist," Erdoğan said.

In the June 24 presidential and parliamentary elections, the received support for AK Party's presidential candidate, Erdoğan, was seen as a success, yet the support for the AK Party's parliamentary race was below the desired percentage. Erdoğan had then said the voters' message with low support was taken to note and that the party will make necessary adjustments. As such, pundits have said that the March 2019 elections are seen as a crucial turning point for the continuation of the AK Party's success in the new presidential system as well.

"We will work day and night and fix our weaknesses. Those who have been out of line will either be corrected or eliminated," the AK Party chairman said, adding that there was no room for personal mistakes to damage the party's overall perception in the eyes of the voters.

Erdoğan also commented on the party's three-term rule, where mayors or lawmakers cannot run for more than three terms, with the exception of an executive decision made on figures deemed crucially successful, saying members who are not renominated for the candidacy should not be upset with the party.

"No one in the party has the right to say 'I'. The AK Party is a 'we' party. Anyone with even a little suspicion on them should leave without waiting for a warning. Organization and candidates should revisit themselves. Our measure should be 'What do the people think of me,'" the president said.

Last year, the AK Party initiated a rejuvenation process, where several mayors in key provinces were asked to resign and be replaced with new ones elected by municipal assemblies, including Istanbul and the capital Ankara. Erdoğan had underlined that his party was experiencing a fatigue that needed to be replaced with dynamism. Since then the party has undergone major shuffling and changes in party organizations and also in local administrations. The party has also introduced a new three-tier candidate selection process, including an electronic voting survey by delegates on who they would like to see run as candidates. The e-tendency survey conducted by delegates was submitted to Erdoğan on Sunday, and so far the Parliament Speaker Binali Yıldırım and the Interior Minister Süleyman Soylu have emerged as the most popular names for the AK Party's Istanbul mayor candidacy.

In Ankara, current Mayor Mustafa Tuna, AK Party Deputy Chairman Mehmet Özhaseki, and Ankara deputies Emrullah İşler and Fatih Şahin were among the names that emerged in the survey.