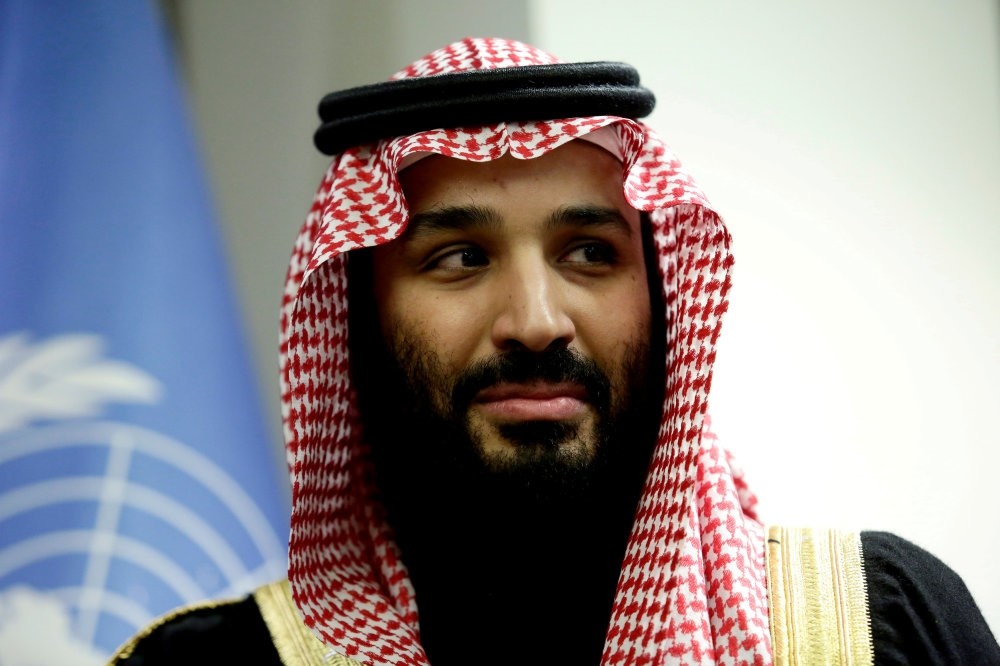 Saudi Arabia's Crown Prince Mohammed bin Salman, who is accused of being the mastermind behind the killing of Jamal Khashoggi, at the United Nations, New York, March 27.
by Daily Sabah Nov 21, 2018 12:00 am

As the international community increases its pressure on Saudi Arabia, the country insists on defending their crown prince, denying his alleged role in the murder of journalist Jamal Khashoggi

Officials from Saudi Arabia continue to refute allegations about Saudi Crown Prince Mohammed bin Salman's (MBS) involvement in the killing of dissident Saudi journalist Jamal Khashoggi as global outrage against Riyadh and the crown prince soars. "We in the kingdom know that such allegations about the crown prince have no basis in truth and we categorically reject them, whether through leaks or not," Saudi Foreign Minister Adel al-Jubeir said yesterday referring to the recent media reports claiming MBS gave the order to kill the journalist, according to sources in the CIA.

Pointing out that the allegations have not been officially announced yet, Jubeir stated that there is no conclusive evidence to support the claims, while Ankara has been emphasizing that those responsible for the murder must have been acting on orders.

Khashoggi, a frequent contributor to The Washington Post and critic of the crown prince, was killed on Oct. 2 inside the Saudi Consulate in Istanbul. After weeks of denying any involvement in the crime, Saudi Arabia later admitted that Khashoggi had been killed inside the consulate but denied that the royal family and crown prince had any prior knowledge. The incident was blamed on low-level officials, including five that are now facing the death penalty over their involvement.

Riyadh announced yesterday that MBS will begin a regional tour on Friday before heading to Argentina to participate in a G20 summit on Nov. 30, where he will possibly meet with world leaders from Turkey, the U.S. and the European Union for the first time since the murder.

Meanwhile, Saudi King Salman stood by the crown prince and heaped praise on the judiciary on Monday, in his first public remarks since the Khashoggi murder tipped the country into one of its worst crises.

"The kingdom was founded on Islamic principles of justice and equality, and we are proud of the efforts of the judiciary and the public prosecution," the 82-year-old monarch said in his annual address to the Shura Council, a top advisory body.

"We ensure that this country will never deviate from implementing God's law without discrimination," he added, without directly addressing the murder of The Washington Post columnist in his speech.

In his speech, the king praised his son's economic reform program aimed at creating jobs for a swelling youth population and preparing the kingdom for a post-crude era.

So far, Turkey has not accused anyone of directly ordering the murder, although President Recep Tayyip Erdoğan said previously that the order was a decision made at the highest level of Saudi leadership, without pointing at the crown prince.

Since the beginning, Turkey has been undertaking extensive efforts to unravel the full truth behind the Khashoggi killing and to bring those responsible to justice. Accordingly, Turkey provided audio recordings of the killing to several countries, including the U.S., Canada, Germany and Saudi Arabia.

Defence Minister Hulusi Akar told BBC Turkish yesterday the "public prosecution is examining the issue from every angle." He added that Turkey has more evidence, including voice recordings and other materials, on hand that will be shared when the time comes.

Foreign Minister Mevlüt Çavuşoğlu also met with U.N. Secretary-General Antonio Guterres on Monday, discussing all the aspects of the Khashoggi case. However, Turkey did not make a formal request for a U.N. inquiry into the killing, the U.N. said regarding previous remarks by Turkish officials saying an international inquiry was needed into the investigation.

The case has also inspired near unprecedented international scrutiny of Saudi Arabia and its powerful crown prince. The report on the culprits of the slaying released last week by Saudi prosecutors also has not satisfied the international community.

French Foreign Minister Jean-Yves Le Drian said Monday, "We are working very closely with Germany at this moment, and we will decide ourselves a certain number of sanctions very quickly over what we know."

He also called for the whole truth to be uncovered and those responsible to be revealed while underscoring that Paris has no intention of meddling in Saudi affairs.

Hours later, Germany issued a travel ban on 18 Saudi nationals for their roles in the killing and Berlin also ordered a complete stop to all arms sales to the kingdom.

"The German government is working with those who have valid authorization with the result that there are currently no [weapons] exports from Germany to Saudi Arabia," said Philipp Jornitz, the spokesman for the German Ministry for Economic Affairs and Energy.

On Monday, Germany banned 18 Saudi nationals believed to be connected to the Khashoggi murder from entering Europe's border-free Schengen zone, which includes 26 countries. Germany also said a month ago it would not approve any new weapons exports to Saudi Arabia but left open what would happen with already approved contracts.

The U.S., on the other hand, has been abstaining from taking harsher steps against Riyadh. Despite previously revoking the visas of individuals responsible for the murder and imposing economic sanctions on 17 Saudi officials, U.S. President Donald Trump has downplayed the involvement of MBS in the killing.

In relation to Washington's stance on the issue, Devlet Bahçeli, the chairman of Turkey's Nationalist Movement Party (MHP), said yesterday that Washington has been protecting the crown prince and that Trump has been overlooking the issue.

Previously, Trump's national security adviser, John Bolton, said people who have listened to an audio recording of the killing do not think it implicates the crown prince.

A detailed report, including information about who was responsible for Khashoggi's murder, was expected to be released yesterday and presented to Trump.

A Republican member of the U.S. Senate Intelligence Committee, Sen. Roy Blunt of Missouri, who has received a confidential intelligence briefing on the matter, told ABC news recently that "it's hard to imagine" that the crown prince did not know about the killing.

In addition, Sen. Lindsey Graham, a Trump ally, told NBC over the weekend that the crown prince has been a "wrecking ball" in the relationship between the U.S. and Saudi Arabia.

"I have no intention of working with him ever again," said Graham, who is in line to be the next chairman of the U.S. Senate Judiciary Committee.