Unlike Trump, Turkey reiterates it will not allow cover-up of Khashoggi killing 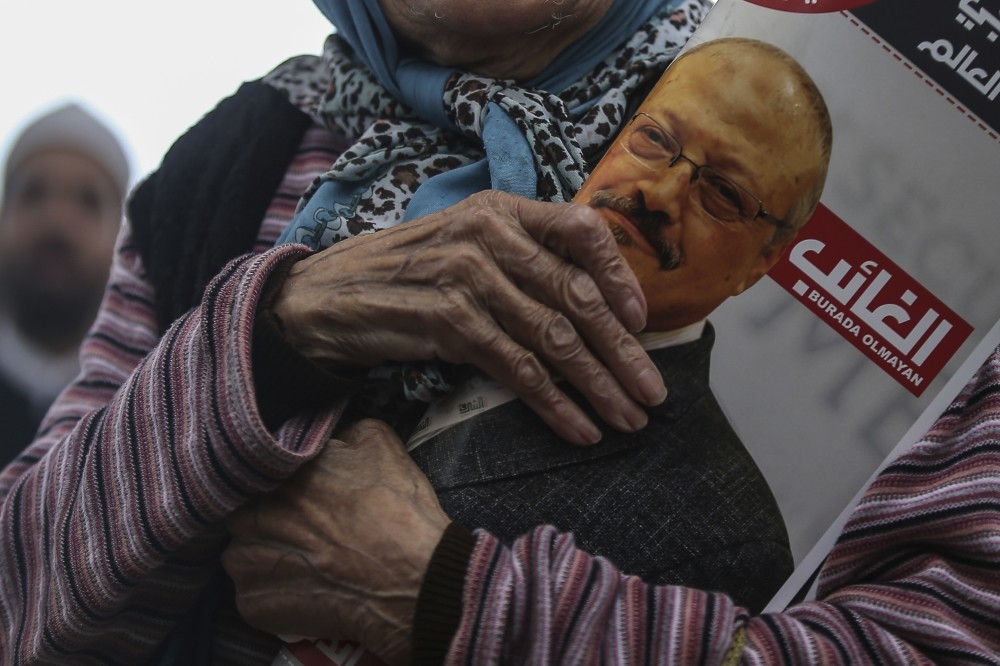 A woman holds a poster during the funeral prayers in absentia for Saudi writer Jamal Khashoggi who was killed last month at the Saudi Consulate in Istanbul, Nov. 1.
by Daily Sabah Nov 22, 2018 12:00 am

Turkey will take all steps to find answers to the unknowns in the killing of Saudi journalist Jamal Khashoggi, including launching an international inquiry to hold those responsible accountable

Turkey said once again late Tuesday that it will not allow a cover-up of the investigation on the killing of Saudi journalist Jamal Khashoggi, shortly after U.S. President Donald Trump said that Washington will not deter its ties with Riyadh in a statement that attempted to eliminate the Saudi crown prince's role in the incident as the ultimate person giving the order for the murder.

"The truth has to come out on who gave the instructions regarding his killing," Turkish Foreign Minister Mevlüt Çavuşoğlu told reporters in Washington following a meeting with his U.S. counterpart Mike Pompeo, adding that Ankara was not satisfied with the level of cooperation it has received so far from Riyadh as part of the investigation into what has been described as a "premeditated" and a "political" murder by many.

Çavuşoğlu reiterated once again that Turkey would take formal steps to seek a United Nations-led international inquiry into the incident if Ankara reaches an "impasse" with Riyadh. After offering numerous contradictory explanations for Khashoggi's disappearance on Oct. 2 after entering the Saudi Consulate in Istanbul, Riyadh said last week that Khashoggi had been killed and his body was dismembered when "negotiations" to convince him to return to Saudi Arabia failed.

The Saudi public prosecutor said it would seek the death penalty for five suspects, among the 21 involved, in the case. Khashoggi, a Washington Post columnist, was known for his critical views on Riyadh's policies.

President Recep Tayyip Erdoğan has said the killing was ordered at the "highest levels" of the Saudi government but has not directly accused Saudi Crown Prince Mohammad Bin Salman, also widely known as MBS, but has excluded specifically the involvement of King Salman.

"This is a humanitarian issue. It concerns a murder. It is not possible to say 'our trade will increase, let's cover this up, let's ignore it," Çavuşoğlu said, as he underlined that the issue was not a "bilateral" matter between Turkey and Saudi Arabia.

He further underlined that there is a "high level of respect" for King Salman in the eyes of Ankara.

Since the beginning of the investigation, Turkey has posed several questions to Saudi authorities: where is the body, who ordered the killing and who is the local collaborator? Turkey has also asked Riyadh to extradite those behind the killing and demanded they stand trial in Turkey as the crime was committed within Turkey's borders.

Ahead of Çavuşoğlu's comment's, Trump released a statement on the Khashoggi investigation, which led to an outcry internationally. Both Democrats and Republicans also ridiculed Trump's attempt to back MBS and Riyadh for their involvement in the murder, in what he described as putting American interests first. Trump said Washington will not take any steps to punish Riyadh nor will it cut arms sales to the kingdom, as the U.S. is a "steadfast partner" of Saudi Arabia.

"It could very well be that the crown prince had knowledge of this tragic event," the president said Tuesday. "Maybe he did and maybe he didn't!"

Trump said Saudi Arabia, a major oil producer, was an important business partner and a "great ally" in the fight against Iranian power in the Middle East. Following Trump's statements the Brent crude oil price slipped more than 6 percent and traded at $62.6. Yesterday, the Brent price was trading up 1.6 percent at $63.5. The U.S. sanctioned 17 Saudi officials suspected of being responsible for or complicit in the Oct. 2 killing, but members of Congress have called for harsher actions, including canceling arms sales. Saudi Arabia is known to be by far the largest purchaser of U.S. arms exports in the world. The U.S. sells about 18 percent of its overall arms sales to the kingdom, which is followed by the United Arab Emirates, another U.S. ally in the Middle East. According to Office of the U.S. Trade Representative (USTR), Saudi Arabia is currently the "The U.S.' 22nd largest goods trading partner with $35.2 billion in total [two way] goods trade during 2017. Goods exports totaled $16.3 billion; goods imports totaled $18.9 billion. The U.S. goods trade deficit with Saudi Arabia was $2.5 billion in 2017."

The CIA has not made a conclusive statement on Khashoggi's murder. Yet, the former director, John Brennan, criticized Trump in a tweet, saying, "Since Mr. Trump excels in dishonesty, it is now up to members of Congress to obtain & declassify the CIA findings on Jamal Khashoggi's death. No one in Saudi Arabia — most especially the crown prince — should escape accountability for such a heinous act."

Following Çavuşoğlu's remarks late Tuesday, the first official remark from the Turkish government was made yesterday by Numan Kurtulmuş, deputy chairman of the ruling Justice and Development Party (AK Party). "Yesterday's statement is a comical statement," Kurtulmuş said in a televised speech.

"It is not possible for an intelligence agency such as the CIA, which even knows the color of the fur on the cat walking around the Saudi Consulate's garden... to not know who gave this order," Kurtulmuş added.

Erdoğan, however, did not speak on the Khashoggi murder during his speech yesterday in Ankara. "You can't just throw in some exclamations (!!!!), yell that the world is dangerous, and call it a press release," Senate Minority Leader Chuck Schumer wrote on Twitter, in response to Trump's remarks. "That's not how a U.S. President responds to the murder of a journalist and American resident."

Many pundits also criticized Trump's uncompromising support of MBS and equating the crown prince to Saudi Arabia as a country. The 33-year-old crown prince, known for his hawkish and aggressive style on regional matters, has spent millions of dollars in an attempt to build a reformist image for himself.

Yet, the international consensus supports a likely role by MBS, as the ultimate decision maker, in ordering the Khashoggi killing, a stance which has caused heavy damage to the crown prince's "reformist" image he has been trying to establish. "It's hard to imagine that the Saudis would have taken this action under a Reagan, Bush, Clinton or Obama Administration without facing serious repercussions," Senator Mark Warner said, criticizing Trump administration. "Once again, our President proves that you can't buy a moral compass," Ilhan Omar, one of the first Muslim women to be elected to Congress, wrote on Twitter. "And Saudi Arabia proves that you can, on the other hand, buy a President."

Lindsey Graham, a senior Republican senator known for support to Trump, harshly criticized the president, saying he believes "there will

be strong bipartisan support for serious sanctions against Saudi Arabia, including appropriate members of the royal family, for this barbaric act which defied all civilized norms." Trump's remarks against Iran in his statement were responded by Iranian Foreign Minister Javad Zarif, who described the U.S. president's remarks as "shameful."

"Mr. Trump bizarrely devotes the FIRST paragraph of his shameful statement on Saudi atrocities to accuse IRAN of every sort of malfeasance he can think of. Perhaps we're also responsible for the California fires, because we didn't help rake the forests — just like the Finns do?" Zarif wrote on his Twitter account. European countries have also condemned the Khashoggi murder, including a concrete step taken by Germany that will impose a ban new weapons exports to Saudi Arabia and halted previously approved arms exports. German authorities had previously banned 18 Saudis for their roles in the killing of the Saudi journalist.