Killing of Khashoggi is a test for many countries, Erdoğan says 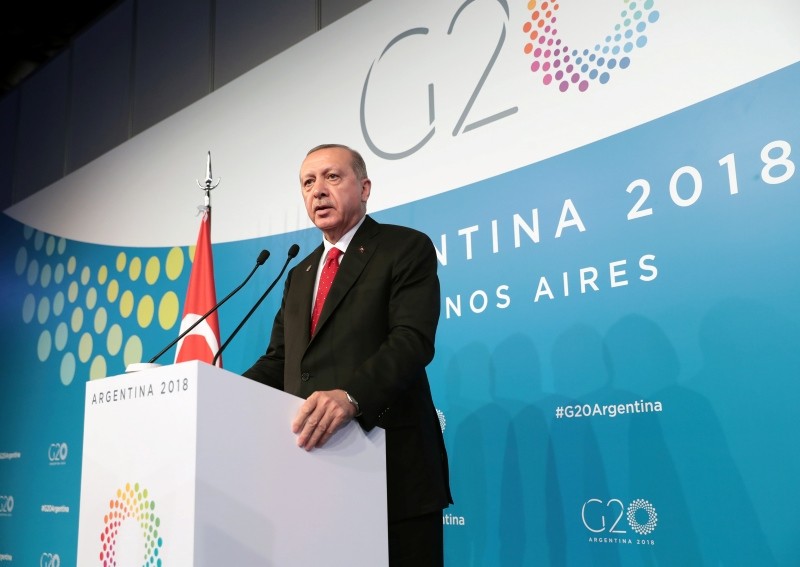 Killing of Saudi journalist Jamal Khashoggi in Istanbul has been a test for many countries, President Recep Tayyip Erdoğan said at a press conference at the G20 summit Saturday.

"We have evidence that Saudi journalist Khashoggi was killed in 7.5 minutes, we shared that evidence with all countries who demanded," he said.

Erdoğan stressed that Saudis are not allowing Turkish authorities to question the suspects.

"We have no intention to damage the Saudi royal family or the Kingdom of Saudi Arabia, but revealing the truth about the murder with all its aspects and putting all whose responsible on a trial would benefit the Saudi Arabia as well," he said.

Islamic world, international public opinion will not be satisfied until revealing all those responsible for murder of Khashoggi, Erdoğan added.

"Despite Saudi denials, the killing was revealed due to Ankara's determined stance," he said.

Erdogan also said that Khashoggi's murder was not officially discussed at the summit, and that Canadian Prime Minister Justin Trudeau was the only leader to bring up the issue.

The killing of Khashoggi, a Washington Post columnist and a critic of the crown prince, at Riyadh's consulate in Istanbul, has strained Saudi Arabia's ties with the West and battered Prince Mohammed's image abroad. Saudi Arabia has said the prince, the kingdom's de facto ruler, had no prior knowledge of the murder.

Jamal Khashoggi went missing after entering the Saudi Consulate in Istanbul on Oct. 2.

After initially saying he had left the consulate alive, the Saudi administration admitted weeks later that he was killed there.