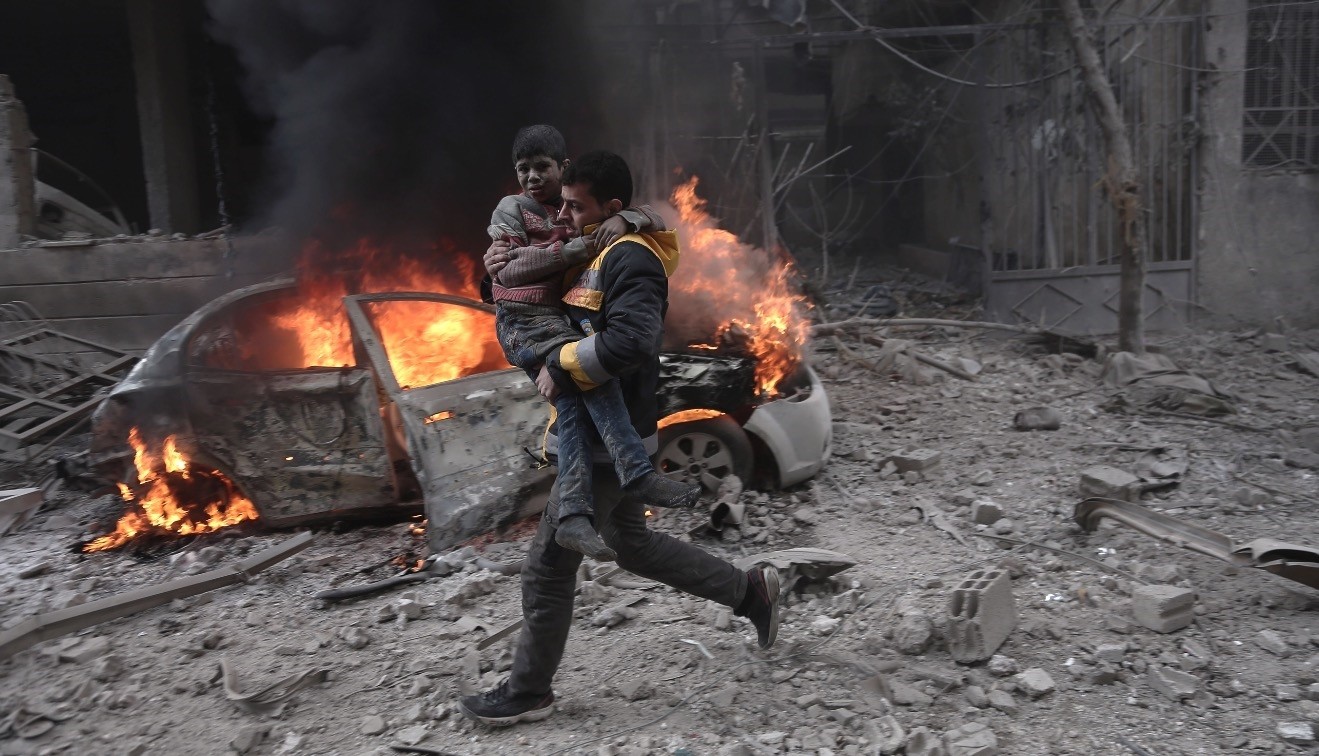 A Syrian paramedic carries an injured child following a reported bombardment by the Syrian regime in the opposition-held town of Hamouria, in Eastern Ghouta, Jan. 6.
by Daily Sabah Dec 01, 2018 12:00 am

Instead of changing the regime in Syria, which has been the main aim since the civil war broke out, the U.S. seems to have changed its stance on the issue and has acknowledged Bashar Assad's position

Once one of the fiercest advocates of ousting Bashar Assad to reach a political solution and permanent peace in war-torn Syria, Washington has signaled it's retracting its policy and accepting the Syrian strongman's position for a while.

Speaking in the House Foreign Affairs Committee, U.S. Special Representative for Syria James Jeffrey said on Thursday that the Trump administration's policy in Syria "is not regime change," but an "irreversible political process that will change the nature and behavior of the Syrian regime."

"We cannot imagine the bulk of the population voting for that individual," he said.

The Syrian civil war erupted in 2011 when the Bashar Assad regime harshly attacked protesters that poured onto streets to demand more rights and freedom. The protests initially emerged following the Arab Spring demonstrations that resulted in the stepping down of strongmen in Egypt, Tunisia and Libya. The cruelty against protesters triggered a rebellion in significant parts of the country, turning into a brutal civil war before long. So far, an estimated half a million people have been killed in the war. Around 6 million people have been displaced internally and another 5 million were driven abroad as refugees.

Jeffrey added that the U.S. hopes to push Iran's military power out of the country. However, Tehran, one of the staunchest supporters of the Bashar Assad regime since the beginning of the civil war, along with Moscow, enjoys close cooperation with Assad.

With the support of Iranian-backed paramilitary groups and the Russian air force, the regime retook control of swathes of opposition-held territories in Syria, pushing the opposition force into northwestern Syria's Idlib. The U.S. has long been criticized by its partners for lacking a proper and consistent strategy in Syria.

Washington's NATO ally Ankara has been particularly discontent with the unreliable U.S. policy as well as its reneged promises regarding ceasing support to the PKK's Syrian affiliate, the People's Protection Units (YPG), in Syria. Ambiguous and contradictory remarks from U.S. foreign policymakers and U.S. Central Command (CENTCOM) figures on these issues have become a serious matter of concern for Ankara.

Ankara's demand for the U.S. to cease arming the YPG and ensure their withdrawal east of the Euphrates dates back to former U.S. President Barack Obama's time in office. While the Obama administration was indifferent to Turkey's calls, President Trump and his officials indicated several times the weapons that were given to YPG terrorists would be retrieved. However, no actions have been taken so far.

Also, Trump administration officials have said that Assad must go to find a political solution in the country. It is also reported by U.S. media that Trump even wanted the U.S. military to go into Syria and assassinate Assad after the regime carried out a chemical attack in April 2017.

Pointing out that waiting for the end of the civil war will be very late as no progress can be made toward lasting peace, Pinheiro said that "that the issues of detainees and disappeared is not to be dealt with after the peace but now is the moment."

He added that the families have a right to know what happened, where the bodies are and to get information about them.

In relation to the recent regime's announcement of the deceased's names, the commission stated that in nearly every case, death certificates issued by pro-regime hospitals for prisoners recorded the cause of death as a "heart attack" or "stroke." It also underscored that some individuals from the same geographic area share common death dates, possibly indicating group executions.

After years of no information on the deaths, the Syrian military and police in May released the names of recorded deaths of the detainees between 2011 and 2014.

"I am going to speak to the crown prince of Saudi Arabia but it is the relationship we have with Saudi Arabia that enables me to sit down with him and be robust on our views on two issues," May told Sky News in an interview on Friday.

She said she would tell him that the investigation into Khashoggi's killing must be full and credible and that those responsible must be held to account.

Regarding Yemen, she said she would encourage him to find a political solution.

"We believe that now is the time, there is an opportunity to find a solution, to come to a political solution because that is the way to ensure the future and a safe and secure future for the people of the Yemen," she said.