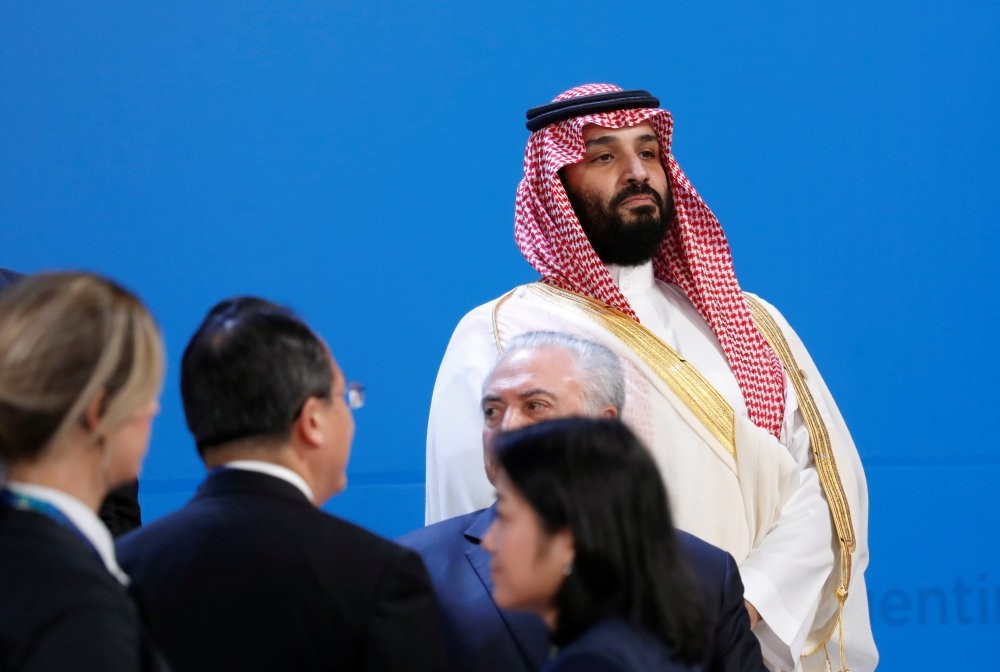 Saudi Crown Prince Mohammed bin Salman looks on as leaders arrive for a family photo at the G20 summit in Buenos Aires, Argentina Nov. 30.
by Daily Sabah with Agencies Dec 04, 2018 12:00 am

Unable to clear himself of international pressure over the Khashoggi murder, MBS has turned to regional countries in the hope of finding some support

Saudi Crown Prince Mohammed bin Salman (MBS) arrived in Algeria on Sunday, his last stop on a string of official visits in the region after his attendance at the G20 summit in Argentina. Many have interpreted the crown prince's tour as a way for him to seek support in face of the nearly two months of pressure over the killing of Saudi journalist Jamal Khashoggi. MBS arrived in Algeria from Mauritania, resuming a tour of Arab countries that started with the United Arab Emirates (UAE) last week. The 33-year-old crown prince, who has been accused of playing the leading role in the killing of Khashoggi was received by the Algerian Prime Minister Ahmed Ouyahia in the capital Algiers.

Before the G20 summit, which was held on Friday and Saturday, the heir to the throne of the world's top oil exporter had also visited Bahrain, Egypt and Tunisia. On his way to Algeria he had stopped over in Mauritania, where Saudi Arabia pledged to build a large hospital in the capital Nouakchott, state media said.

The crown prince's tour in the region is his first trip abroad since the killing of Khashoggi in the Saudi Consulate in Istanbul on Oct. 2, which has battered the crown prince's "reformist" image abroad.

Saudi Arabia has said the crown prince had no prior knowledge of the murder. After offering numerous contradictory explanations, Riyadh said last month that Khashoggi had been killed and his body dismembered when negotiations to persuade him to return to Saudi Arabia failed.

Although he was welcomed by the state authorities during his visits, MBS had faced many protests by local people, who have accused him of being the mastermind behind the Khashoggi murder.

Hundreds of Tunisians protested on Tuesday against the visit of the crown prince, denouncing the top Saudi royal as a murderer. Hundreds of protesters marched through the central Habib Bourguiba Avenue in Tunis, scene of the mass protests that toppled Ben Ali in 2011.

They chanted "the murderer is not welcome in Tunisia" and "Shame on Tunisia's rulers" for receiving MBS.

Journalists put up a huge banner at their union showing the prince with a saw, a saw is what Turkish sources have said was used to dismember Khashoggi in Istanbul.

However, the Saudi crown prince is unlikely to face protests over the murder as he did in Tunisia, as demonstrations are banned in Algiers. But, still, a group of prominent journalists and intellectuals wrote an open letter opposing his visit, saying it is "unethical and politically inappropriate."

World leaders urge MBS to be clear on KhashoggiDespite some regional countries' close attitude toward him, for many in the international community, including various world leaders, MBS is a controversial figure, which is why his presence in the G20 summit caused some awkward moments.

French President Emmanuel Macron was captured on video seemingly lecturing the crown prince, at one point being heard saying "I am worried," "you never listen to me," and "I am a man of my word." Macron said the crown prince only "took note" of his concerns. British Prime Minister Theresa May also said she pressed the crown prince. Canadian Prime Minister Justin Trudeau said he had a frank conversation with the crown prince at a leaders' dinner on Friday, telling him there was "a need for better answers on the killing of Khashoggi." MBS was even pictured on the far edge of the traditional "family portrait" photograph, ignored by other leaders.

Before the start of the gathering, Argentinian President Mauricio Macri had said it was possible that the accusations against the crown prince could be discussed when the leaders convened. In the end, they were not.

Days before the start of the summit, Human Rights Watch called on Argentina to use a war crimes clause in its constitution to investigate any involvement by the crown prince in possible crimes against humanity in Yemen, where a Saudi-led military campaign is underway, and Khashoggi's murder. The federal prosecutor's office assigned to review the case had not announced whether a formal investigation would be opened by the close of the summit on Saturday.

However, President Recep Tayyip Erdoğan was the one leader demonstrating a relatively stronger reaction toward the crown prince.

The murder of Khashoggi is not an issue of Turkey but of the whole world, said Erdoğan on Saturday. Speaking at a news conference at the G20 summit, Erdogan said Turkey has never seen the Khashoggi's murder as a political issue.

"For us, this incident is a vicious murder and will remain so," said Erdoğan. The president further said that Ankara mobilized all efforts since the beginning of the brutal killing of Khashoggi.

He also emphasized the lack of seriousness displayed by the Saudi authorities. During the G20 summit, he is reported to have admonished MBS for his "unbelievable explanation" on Khashoggi's killing. MBS said during the summit that no one can blame Saudi Arabia over anything unless it is proved.

Erdoğan stressed that Saudis are not allowing Turkish authorities to question the suspects.

"We have no intention to damage the Saudi royal family or the Kingdom of Saudi Arabia, but revealing the truth about the murder with all its aspects and putting all those responsible on a trial would benefit Saudi Arabia as well," he said.

Despite heavy criticism, MBS was still greeted by some, most particularly the Russian President Vladimir Putin, who walked up to the crown prince, high-fived him and then shook his hand heartily.

Many saw Putin's exuberant greeting of the crown prince as over the top and thus, the images of the scene promptly went viral.

U.S. Secretary of State Mike Pompeo doubled down on U.S. support for the crown prince on Saturday, saying there was "no direct evidence" linking MBS to the murder of Khashoggi.

His remarks to CNN came just hours after The Wall Street Journal reported that the CIA believes MBS sent 11 messages to an adviser who oversaw the killing of Khashoggi in the hours before and after the murder. U.S. media reports previously said the CIA had concluded that the crown prince had ordered the killing of Khashoggi. Pompeo told CNN he has "read every piece of intelligence that is in the possession of the United States government."

"When you complete that analysis, there's no direct evidence linking [Mohammed bin Salman] to the murder of Jamal Khashoggi. That is a accurate statement, it is an important statement, and it is the statement that we are making publicly today," Pompeo added.

Meanwhile, when asked about the Khashoggi killing, the MI6 spy chief said yesterday that it was "an appalling and shocking attack."

CNN International had reported that Khashoggi had exchanged more than 400 WhatsApp messages with Montral-based Omar Abdulaziz, a critic of MBS, in the year before he was killed.

According to CNN's report, Khashoggi describes MBS, "as a 'beast,' a 'Pac-Man' who would devour all in his path, even his supporters."

"The more victims he eats, the more he wants," Khashoggi was quoted as saying in one message sent in May, the CNN report added.

The dissident, Abdulaziz, said his phone was targeted by hacking software made by Israel's NSO Group, exposing his communications with Khashoggi to Saudi authorities.

Abdulaziz, who lives in Canada, is a sharp critic of the Saudi monarchy on social media.

The Associated Press obtained court documents yesterday in which Abdulaziz says he worked with Khashoggi on a project to rein in Saudi trolls. The lawsuit says the project angered Saudi rulers and, in Abdulaziz's opinion, "cost Khashoggi his life."