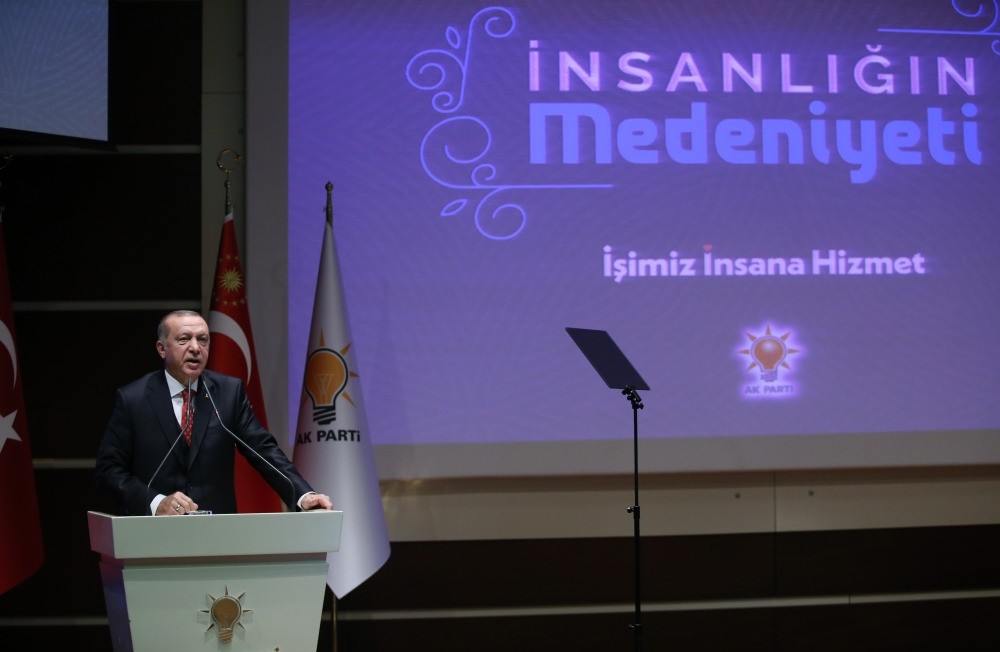 President Recep Tayyip Erdou011fan speaks at an event in Istanbul titled, u2018Civilization of Humanity,' marking the 70th anniversary of the adoption of the Universal Declaration of Human Rights, Dec. 10.
by Daily Sabah Dec 11, 2018 12:00 am

The worst record for human rights belongs to the ones who ‘defend' these rights the most, Erdoğan said, referring to Western countries. The president also accused Western media, which was promoting the riots in Istanbul during the Gezi Park protests, for overlooking the events in Paris

President Recep Tayyip Erdoğan accused Western countries of not taking an objective approach when it comes to defending human rights. Speaking at an International Human Rights Day event yesterday, Erdoğan criticized European countries and its media for ignoring the unrest in France and the refugee issue. "It does not coincide for those defending human rights today to have the worst record," Erdoğan said at the "Civilization of Humanity" event, held in Istanbul to mark the 70th anniversary of the adoption of the Universal Declaration of Human Rights.

"Those who acted as the defenders of human rights during Gezi riots are now feigning ignorance. We have not been able to watch France, the Netherlands or Brussels on the news."

Erdoğan was referring to the wide media coverage during the riots that hit Istanbul in 2013, when relatively small demonstrations at Gezi Park grew into a nationwide wave of anti-government protests that left eight protesters and a police officer dead. He said that the Western media has failed to provide similar coverage for the "yellow vest" unrest that has pushed France into chaos. More than a thousand people have been arrested during the protests and millions were lost in material damages.

"They did not air the events in [France] because they are not honest. Those who put us through a democracy test did not abstain from putting democracy on hold when they were targeted," the president added, referring to police violence against protesters' in Paris.

On Nov. 17, people - mostly working class French citizens - began to take to the streets in protest of tax hikes on fuel prices. The protests have since snowballed into mass demonstrations across the country, calling on French President Emmanuel Macron to step down. The yellow vest movement accuses Macron of favoring the rich at the expense of those having a difficulty to make ends meet.

During the demos in Paris and other cities of the country, protesters have looted and caused a large amount of material damage, while police responded violently. The largest demos took place in Paris on Saturday, during which the government had mobilized 8,000 police officers and armored vehicles. More than a thousand people were reportedly arrested nationwide.

BORDERS CLOSED TO SYRIAN REFUGEESPresident Erdoğan also said Western countries have failed to defend human rights in the face of the humanitarian crisis that emerged with the refugee influx out of Syria.

"When millions of refugees were moving toward Turkey, those calling on us to open our borders were welcoming refugees with the harshest measures, including barbwire and border walls. Who are the defenders of human rights? Us or them?" Erdoğan asked, criticizing European countries of turning a blind eye to refugees escaping from conflict zones in Syria and North Africa.

"If we are on top of the list when it comes to delivering humanitarian aid, it is not because we have a lot of money, but we have a big heart," Erdoğan said.

Erdoğan highlighted the steps taken to increase the status of human rights in Turkey, under Justice and Development Party (AK Party) governments, saying that they have not discriminated against anyone due to their ethnic backgrounds, clothing or views.

"No one can lecture our country on democracy, human rights or freedom," Erdoğan said.

Over the past 16 years, the AK Party has focused on solving Turkey's human rights issues and liberalization, moving forward with the EU accession process, strengthening the economy and health sectors, and fighting terrorism.

In October 2005, Turkey and the EU began negotiations for full membership after Ankara's mass liberalization and democratic reforms, including allowing Kurdish language broadcasts on public television. Continuing democratic reforms, the AK Party initiated a constitutional amendment to the 1982 Constitution in 2008, which was ratified after a military coup in 1980, including lifting the ban on the Islamic headscarf at universities. Deemed anti-secular, the change was negated by the constitutional court, which sought a political ban on the AK Party, which itself narrowly escaped dissolution by court order. The headscarf ban was progressively eased from 2010.

"These days, Turkey is definitely not a place where one could find problems regarding democracy or human rights," he added.