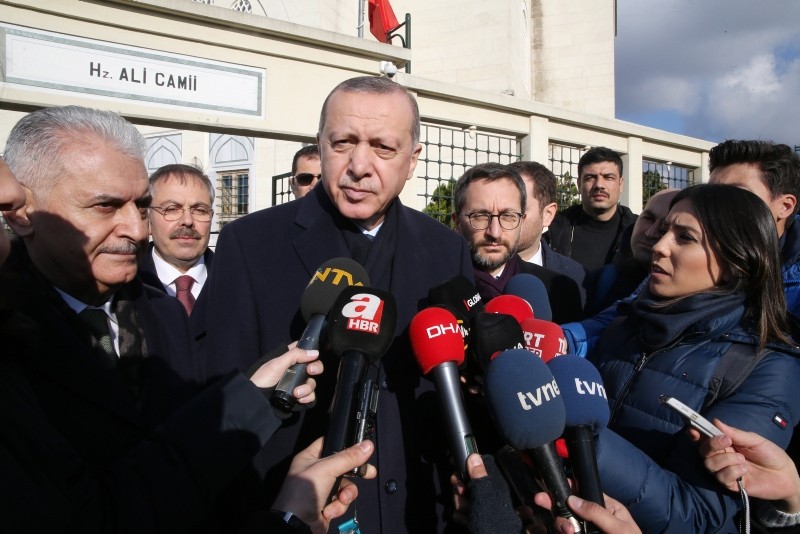 Syrian regime forces are trying to run a psychological operation in Manbij by saying they entered the town and took control of it, but nothing is certain yet according to Turkish intelligence and Russian officials, President Recep Tayyip Erdoğan said Friday.

Commenting on Turkey's imminent military operation against the YPG, Erdoğan underlined that once terrorist organizations leave northern Syria, Turkey will have nothing left to do there.

"In the current situation, we are still supporting the integrity of Syrian soil. These areas belong to Syria."

Erdoğan's remarks came after the PKK terrorist group's Syrian affiliate People's Protection Units (YPG) said it had invited Bashar Assad's regime "to send its armed forces to take over" the positions they had withdrawn from and "protect Manbij in the face of Turkish threats."

Speaking to reporters after Friday prayers in Istanbul, Erdoğan said he may hold talks with Russian President Vladimir Putin in Russia about the developments after a Turkish delegation's scheduled visit Saturday.

According to Reuters, following the appeal of the YPG, the regime forces entered Manbij on Friday saying that they guarantee "full security for all Syrian citizens and others present in the area."

Welcoming regime forces entry into Manbij, Kremlin spokesman Dmitry Peskov described the development as a "positive step" that could help "stabilize the situation."

On the same day, the Defense Ministry also called on all parties to refrain from making any moves that will escalate the instability in Manbij.

"We warn all parties to stay away from provocative actions and rhetoric that will make the region more unstable," the ministry said in a statement.

"The YPG terrorist organization that controls the region by force does not have the right or the authority to make a statement and invite other elements on behalf of the people in the region," it added.

"We invite the Syrian government forces, which are obliged to protect the same country, nation and borders, to assert control over the areas our forces have withdrawn from, in particularly Manbij, and to protect these areas against a Turkish invasion," the YPG said in a statement earlier on Friday.

Commenting on the recent developments in Syria, Russian Foreign Minister Sergey Lavrov said on Friday that they are approaching Turkey's operation in the framework of Syria's territorial integrity.

On Dec. 12, Erdoğan announced that Turkey will carry out a military operation east of the Euphrates River in Syria "in a couple of days" against terrorist organizations.

Turkey has been reiterating that it will not allow a "terrorist corridor" to be established on its southern border by the YPG.