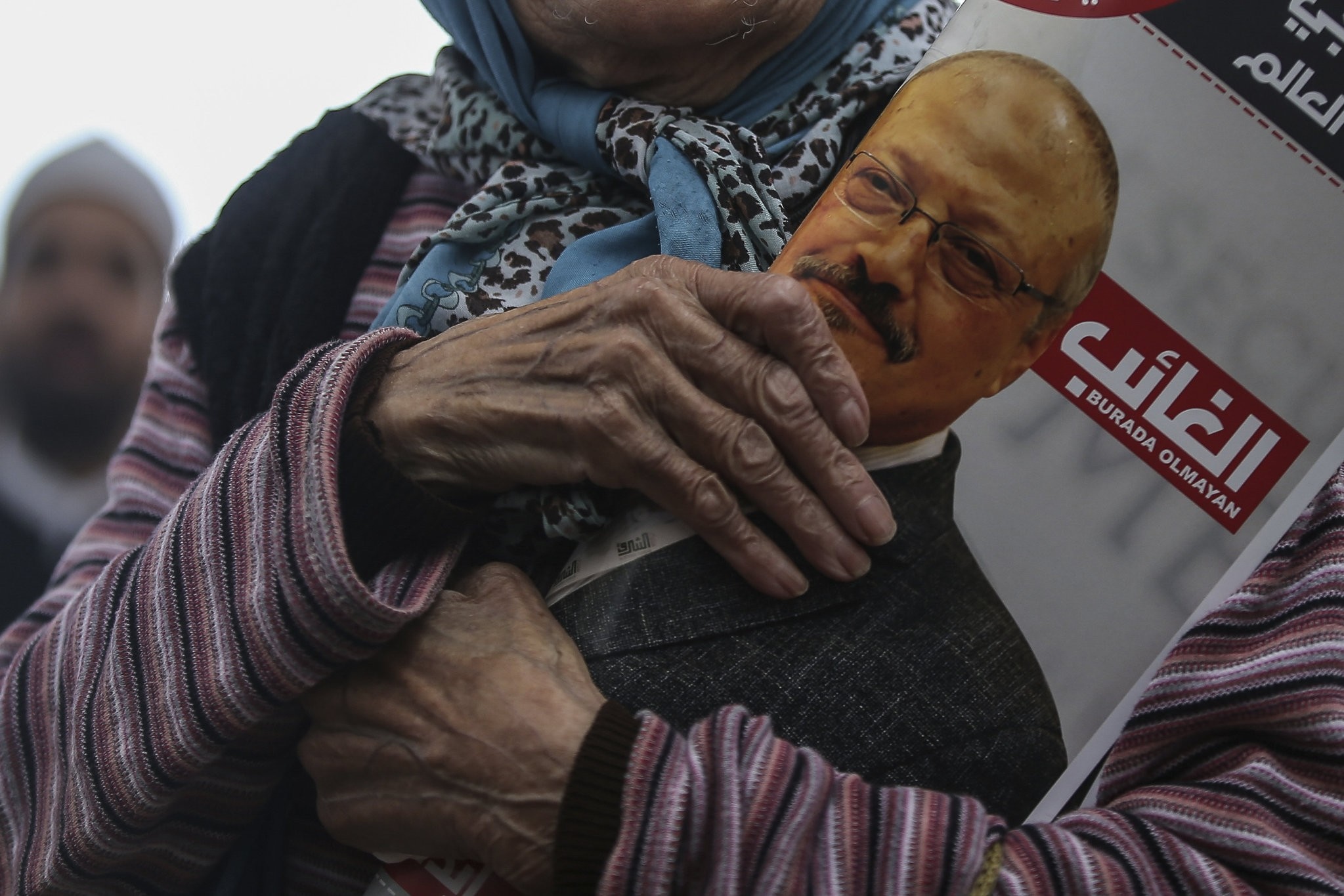 A woman holds a poster during the funeral prayers held in absentia for Saudi writer Jamal Khashoggi, who was killed in October last year in Saudi Arabiau2019s Consulate in Istanbul, Nov. 16, 2018.
by Şeyma Nazlı Gürbüz Jan 21, 2019 12:07 am

One of the authors of ‘Diplomatic Atrocity: The dark secrets of the Khashoggi murder,' Ferhat Ünlü, said exposing all the unknowns behind the journalist's killing and honoring him were among the motivations behind writing the book

"We desired to honor the memory of Khashoggi," said Ferhat Ünlü, one of the writers of the book "Diplomatic Atrocity: The dark secrets of the Khashoggi murder," a book that looks into the murder of dissident Saudi journalist Jamal Khashoggi. Recently published by Turkuvaz Books, "Diplomatic Atrocity" is a result of the hard work of three journalists from the Sabah newspaper, Ferhat Ünlü, Abdurrahman Şimşek and Nazif Karaman, who aim to leave nothing uncovered when it comes to the Khashoggi killing, and thus present a reliable case. 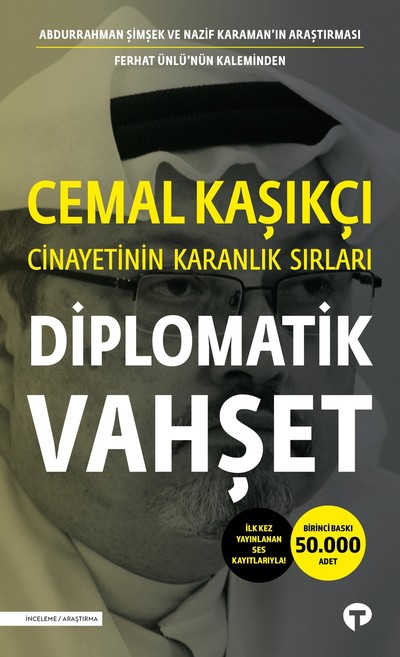 In an exclusive interview with Daily Sabah, Ünlü explained where they started from: "The process started for us just after Khashoggi entered the consulate in Istanbul on Oct. 2 and did not come out."

"When the news regarding Khashoggi's disappearance began to circulate, we received information stating that a Saudi jet had landed at the aviation terminal at Istanbul Atatürk Airport," he said, underlining that it caught their attention since they realized this could not be a coincidence. "When we investigated the jet, we uncovered the list of the 15 member squad team [on board], which made us a reliable source on the case, especially for international media outlets."

Khashoggi, a columnist for The Washington Post and a critic of Saudi Crown Prince Mohammed bin Salman, also known as MBS, was reported missing by his fiance Hatice Cengiz after entering the Saudi Consulate in Istanbul to obtain marriage documents on Oct. 2, 2018. On the day of Khashoggi's disappearance, 15 other Saudis, many of them Saudi intelligence operatives, arrived in Istanbul and visited the consulate during the same time of his disappearance. All of the identified individuals have since left Turkey and were later arrested by Saudi authorities. 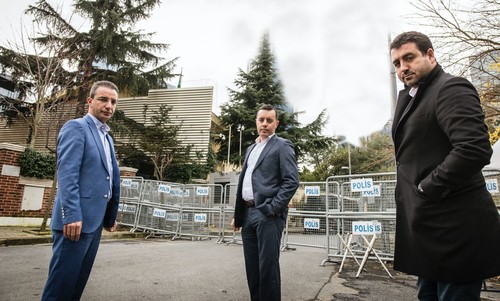 "We investigated the case under three subcategories: diplomatic, intelligence and criminal. The intelligence part of the case, however, was missing one thing: a detailed analysis of the audio tapes. That's why we started to write the book in the first place, to share the details of the audio tapes which are the biggest piece of evidence in the murder for the world," Ünlü expressed regarding the transcriptions of the audio recordings of the killing that were shared in the book for the first time with brand new details about the case.

On November, a seven-and-a-half minute audio recording of the moments Khashoggi was killed were reportedly given to Saudi Arabia, the U.S., France, Canada, Germany and the U.K. Gina Haspel, the director of the U.S. Central Intelligence Agency (CIA), also listened to the "compelling" audio tape of the brutal killing in late October in Ankara. However, the book revealed that the audio recordings are not made up of a seven-and-a-half minute piece alone. As a matter of fact, the recordings are more comprehensive and longer. The book shares the transcripts of some critical moments from the hours long recordings, including the moment of Khashoggi's killing, the conversation of the murderers before the incident, saying that they are "good at cutting," and their pressuring Khashoggi to text his son that he is okay.

According to the book, the recordings are so dramatic that even the intelligence members, who are experienced in such matters, felt disturbed while listening to them.

Regarding how they received all the intelligence information on the case, including the transcriptions of the audio recordings, Ünlü said that they have relations based on trust, which enables them to receive such critical information.

"Our connections are based on trust. When people, particularly the intelligence services and police forces, know that you are doing your job with national concerns, they trust you and do not have a problem with sharing information," he said.

When it comes to why the Saudis preferred to commit such brutal murder in Turkey, Ünlü expressed that the underlying reason is the belittling assumptions the hold about the country.

"The Saudis regarded Turkey as a low-profile country and undermined its intelligence power. That's why they acted in such a reckless way. However, in the post-murder period, Turkey has conducted successful public diplomacy," Ünlü emphasized. He indicated that the reason why Turkey has shared the information bit by bit with the international community is also an outcome of this strategic public diplomacy.

"We do not have any more unshared evidence. To be honest, I do not believe there is anything left to be shared. Turkey has shared all the information it has; wanting to inform the international community," Ünlü underlined. According to him, the Saudis did not do what they had to do regarding the murderers although 15 members of the squad have been arrested. "They have been isolated. But they are not detained as we understand it," Ünlü said, basing his information on a reliable source.

Turkish officials have repeatedly suggested that the murder trial be held in Turkey where the crime was committed. Saudi authorities have denied Turkey's requests and said the suspects will be tried in the kingdom.

"The reason why Khashoggi was killed may be the fact that he was a supporter of Turkey, seeing the country as a role model for Saudi Arabia. It may also be because he was making MBS jealous with his relationship with the other princes of the kingdom. We know for certain that MBS is afraid of any criticism from Western media and that was exactly what Khashoggi was doing,"Unlu said speaking on the possible motivations behind the murder.

Khashoggi's murder prompted an unprecedented international outcry and forced many countries to reassess their ties with Riyadh. Although Saudi officials have denied numerous times that the royal family and MBS had no prior knowledge of the murder, all evidence has been pointing to the crown prince as the mastermind.

As far as Khashoggi's missing body is concerned, Ünlü is of the opinion that it was destroyed in the consulate well.

"If the body is never found, I wouldn't be shocked," he said.

In Ünlü's opinion, the criticisms they received for the book, especially for writing it at such short notice, are "not fair."

"Since we had to publish the book at such short notice, I had to write 18 hours a day. Although there has been criticism over this writing process, claiming that the book cannot be reliable since it was written in such a short time, I believe that in our job, we are racing against time. And when I look at the outcome, I don't believe that such criticism is fair," he said.

"When I look back, the thing that has the most influence on me during the whole process was the realization of the honorable standing of Jamal Khashoggi that can be understood [better] by the audio tapes," Ünlü said, when asked what the most striking thing for him was about the process. "I know that this is a death not wasted," he added.