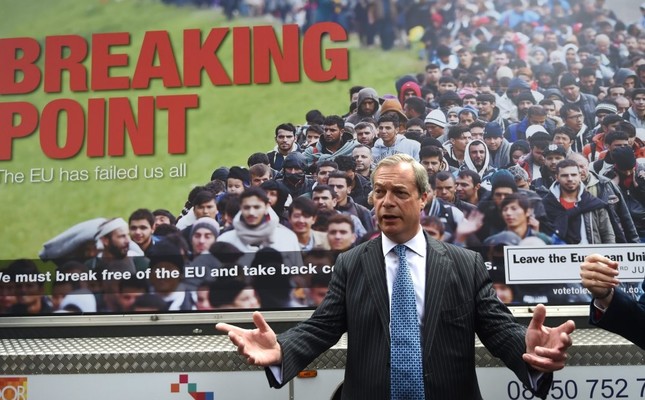 The British media's coverage of Brexit, during which the ‘leave' campaign heavily penetrated anti-migration discourse in society harnessing feelings of xenophobia, has done nothing but abetted the rising hate crimes in the U.K.

The issue of migration has always been a key debate in British politics. This phenomenon had eventually led a prime minister, who was in favor of staying in the European Union, to take the country to a referendum to ask the nation whether they want to remain in the EU or not.

Following a 10-week campaign period, the country voted to leave the bloc. After the first few weeks, the fierce Brexit discussions were mainly shaped around migration. While the "leave" campaigners were using populist rhetoric, the "remain" camp mainly adopted a defensive manner and stood calm with the majority of polls showing the country was to continue being an EU member.

At this point, the British media which has a long history of open partisanship, had either used anti-immigrant sentiments or stood silent over immigrants being targeted by politicians or certain media outlets. We now see the number of hate crimes reported in the U.K. increased during the Brexit referendum period and in the months that followed. The offensive language used against immigrants and other nations had a serious impact for such a shameful outcome in hate crimes.

Brussels: Media in UK failed to inform public with facts

For the "leave" camp, staying in the EU meant more migrants flocking into the country. However, the majority of the migrants in the U.K. are from non-EU countries. When the EU was enlarged with 10 countries joining the bloc in 2004, migration to the U.K. from EU member states had expectedly increased but even then the number of migrants from outside the EU was still higher.

The EU officials that Daily Sabah spoke to are saying that the statistics of migration into the U.K. and the percentage of skilled migrants from EU member states were not mentioned by the British media. This frustration can be felt in almost all Brexit discussion in the Brussels bubble.

For the British euroskeptic politicians and media, the "leave" campaign also had to focus on possible further enlargement of the bloc with a focus on the 80 million population of Turkey. A possible mass migration of Turkish citizens was making the news every day in the British newspapers. While one claiming that the country would join the EU by 2020, another tabloid was saying the bloc will border Syria and Iraq.

When Daily Sabah recently discussed the media's handling of Brexit with a senior European Commission official, it was stated that the EU provided "facts" on many issues to the British media, including on the bloc's enlargement and all the unfounded claims of the "leave" campaigners. Expressing frustration, the official said "only a few journalists" were keen to do some fact-checking and requested information on the accession progress of Turkey to the EU.

Although Ankara's accession negotiations started in 2005, only 14 of the 33 chapters of the EU acquis had been opened and one just closed, meaning that it would take many years for the country to join the bloc even in an event of fully accelerated negotiations. 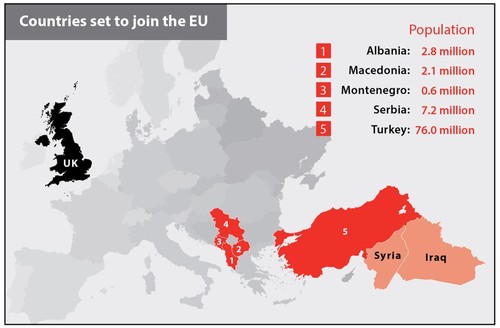 The "leave" campaign during Brexit played on the rhetoric of the potential immigration "threat" posed by countries with potential to accede into the European Union, primarily Turkey.

According to an official statistical hate crime report by the Home Office, it was shown that the number of offences in England and Wales increased by 29 percent in 2016-17 compared to the previous year. Unsurprisingly, official records show a spike in hate crime around the time when Brits went to Brexit polls. "The increase over the last year is thought to reflect a genuine rise in hate crime around the time of the EU referendum," the Home Office report said.

Media organizations which wanted the U.K. to leave the EU pumped fear and put a lot of effort in showing migration as one of the biggest problems that the country was facing. The message increasingly conveyed to the public was that Brussels was not only a place where multilateral European policies were being decided, but a place which opened the gates of Britain to masses of migrants who want to take the jobs and houses or invade the country of native Britons.

Racism and intolerance against immigrants has not fallen but gradually increased in British society and the government is accused of not doing much to overcome this societal issue. Following her 11-day trip to the U.K. in May 2018, Tendayi Achiume, U.N. special rapporteur on racism, said that racism in the U.K. has been more normalized since Brexit. Calling on the British government to address the "hostile environment" toward immigrants, Achiume said: "A Brexit-related trend that threatens racial equality

in the U.K. has led to the growth in the acceptability of explicit racial, ethnic and religious intolerance."

The situation of immigrants in the country, finding themselves as scapegoats of the migration-driven British politics also showed itself at the ballot boxes. According to Lord Ashcroft's exit polls in which he surveyed 12,369 people, 67 percent of those describing themselves as Asian voted to remain, as for black voters the number increased to 73 percent. When talking about why Brexit should take place, anti-immigrant campaigners claimed that prohibiting migration will create jobs and accessible housing for Brits. However, British citizens of other origins, mainly Muslim Asians and blacks, felt the surging impact of xenophobia rather than a campaign that intends to make Britain a more prosperous place to live in. Anti-foreign rhetoric was not only used by extreme right groups and politicians, but also the media.

The British society that has had a relatively good recent history of integration has turned to a more nationalistic line, finally giving an end to its EU membership. The final shot of the euroskeptic media was the matter of immigration which was on the main agenda of the "leave" campaign in the final weeks of the Brexit referendum.

The populist, nationalist and protectionist rhetoric grabs the attention of nationalist or lower income segments of the society with a greater acceptance when the media gets involved in it. The media's role in referendums and plebiscites is undeniably substantial. Misinforming the public and adopting populist rhetoric severely damages politics and the daily lives and future of the citizens.

The British media should start paying more attention to the very basic fundamentals of journalism: Informing the public with facts, if not, growing societal problems are inescapable, not to mention ongoing domestic British politics' agony that goes between the choice of leaving the EU with a deal or not.

Some racist incidents in January:

Some supporters of Millwall could be heard using a racist term that is derogatory to the Pakistani community during Saturday's 3-2 win at The Den against Everton.

Racist graffiti has been daubed on the walls of an Islamic school in Newcastle-upon-Tyne's West End. The perpetrators scrawled "Moslem terrorists" and a swastika among other offensive symbols inside the Bahr Academy.

London police are investigating a "disturbing" video that shows a man following Muslim schoolgirls and calling for them to be sterilized. "I think what we might have to do is think of something like old doctor Mengele [...] so the c**ts can't f***ing multiply." The man cites Nazi doctor Mengele as he calls for children to be sterilized "so they can't multiply."

One threat sent to Bristol mayor Marvin Rees and his deputy Asher Craig through Facebook referred to the Labour MP Jo Cox, who was killed a week before the Brexit referendum in 2016. Another threat was sprayed on the pavement outside Rees's house. It read: "Marvin must die." Rees became the first directly elected black mayor of a major European city in 2016 when he defeated the independent incumbent George Ferguson. He appointed Craig, who is also black, as deputy mayor responsible for communities.

A group of 20 Chelsea fans are alleged to have sexually assaulted a women on a train and chanted racial abuse in front of children. There have been a string of allegations made against Chelsea fans in recent months, including claims of anti-Semitic chanting during a Europa League game in Hungary.

Share on Facebook Share on Twitter
Previous in Politics Akar stressed the importance of having good neighborly relations with... Next in Politics The Iraqi Kurdistan Regional Government (KRG) prevented a planned...
DAILY SABAH RECOMMENDS