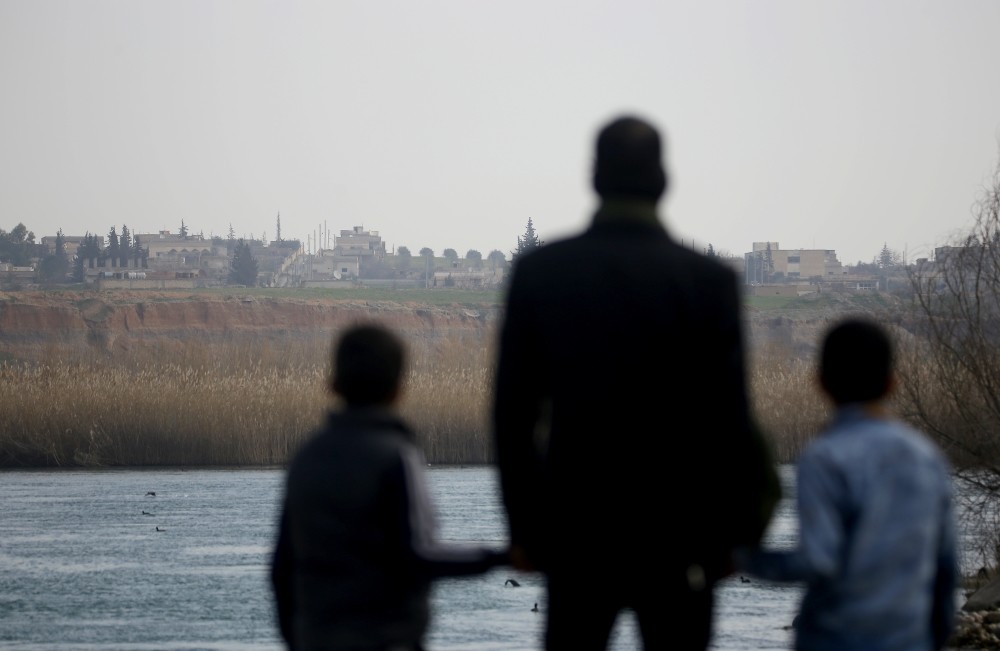 Mohamed Abu Ibrahim looks at his hometown Shuyukh on the eastern banks of the Euphrates River alongside his children, Feb.1, 2019.
by Daily Sabah with AA Feb 02, 2019 12:25 am

Tired of longing for the past, displaced Syrians are not only holding on to the dream of returning to their hometowns one day but are also raising their children with the same dream.

Nearly every day, Mohamed Abu Ibrahim, who has been living in northern Syria's liberated Jarablus, has been traveling to the banks of the Euphrates with his two small children to get a glimpse of his hometown on the opposite side. Abu Ibrahim came to Jarablus four years ago with his family from their hometown of Shuyukh on the eastern banks of the Euphrates due to the brutalities of the PKK's Syrian affiliate People's Protection Units (YPG), and is currently staying in a camp.

Telling his children about a terror-free Shuyukh, he has instilled in them the goal of going back to their home when the YPG oppression ends.

"My son, Shuyukh, used to have very fertile land ... Life was very beautiful there. People loved each other," he told to Anadolu Agency (AA) while standing on the bank of the river.

"Look my son; we keep Shuyukh in our hearts. You should keep it there like us as well," he added.

Abu Ibrahim said he always told his sons that the land was inherited from their ancestors, and they should fight, if necessary, to take it back.

In 2016, Turkish and the Free Syrian Army (FSA) forces launched Operation Euphrates Shield against Daesh terrorists along its borders, in northern Syria.

Following the successful operation against Daesh, the northern Syrian towns of Jarablus, al-Rai, al-Bab, Dabiq and Azaz were cleared of the terrorist organization.

In January 2018 last year, Turkey also launched Operation Olive Branch against the YPG in northeastern Afrin province to clear the region from the group.

Since then, Turkish security forces have patrolled the area, supporting the local police, which was also formed with the help of Ankara. Turkish state institutions and private companies have also put down roots in this relatively stable pocket, becoming an integral part of everyday life.

The walls of the main hospital in Jarablus are now adorned with portraits of President Recep Tayyip Erdoğan, and the town is lit by an electricity grid set up by Ankara.

"The PKK forced nearly 10,000 families, including ours, to migrate from Shuyukh, and 90 percent of them are living in camps in Jarablus," he explained. "The PKK won't allow us to return," Abu Ibrahim said, adding that the terrorists destroyed their homes and burned their crops.

"They keep threatening us. Everybody is afraid of them," he said, stressing that all of the people staying in the camps were waiting for the operation.

He added that even if the people were given palaces to live in, they would prefer their houses in their hometowns.

"Even if they have single-room houses there, it is heaven for them," he said.

The YPG systematically and forcefully displaces local people from their homes in traditionally Arab towns in a bid to lay the groundwork for their future claims of an autonomous region, to be established along demographic lines.

As a part of its policies, the group has confiscated the property of citizens and demolished homes of local people in areas near the Syrian-Turkish border to force them out of the city.

Amnesty International also documented a systematic wave of forced displacement and home demolitions, amounting to war crimes, carried out by the de facto autonomous administration dominated by the YPG in 2015.

The report detailed the deliberate displacement of thousands of civilians, including Kurds, and the razing of entire villages in areas under the control of the terrorist organization.

Abu Ibrahim further highlighted that a possible anti-terror operation by Turkey will enable him to return home.

"These days, it is said that an operation will be carried out east of the Euphrates. Everyone is happy over the news," he said, adding he wants to be buried in the eastern area even if he dies on the western side.

Turkey is prepared to launch an operation east of the Euphrates to eliminate the terrorist elements; however, following the U.S. decision to withdraw from Syria, Ankara decided to put the operation on hold.

Mentioning the operation east of the Euphrates that is expected to be launched soon, Erdoğan said Monday that it will be the third operation of the Turkish military in the region to clear out the remnants of Daesh.

"We will bring peace to the east of the Euphrates soon as we did in other areas," Erdoğan said.

Yazen, one of Abu Ibrahim's sons, said, "I used to play ball with my friends. We played hide and seek. We had a big garden." "Now, we are in Jarablus. We come here [by the riverside] to see our house."

Yazen said he was sorry for the land they lost. "I want to become an engineer. I want to build a bridge to go to our home," he said.