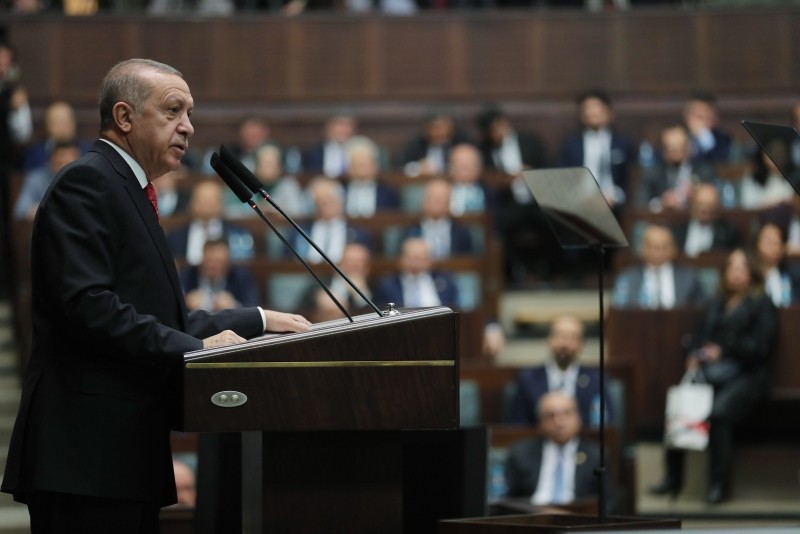 President Recep Tayyip Erdoğan said Tuesday that Turkey has closed its chapter with the International Monetary Fund (IMF) for good.

"Turkey's ledger with the IMF is closed and will not open again," Erdoğan said while addressing the ruling Justice and Development Party (AK Party) group meeting.

He emphasized that Turkey cut its ties with IMF in 2013 and will not borrow from it again.

Erdoğan also addressed the crisis in Venezuela, expressing disbelief that democratic countries in the Americas and Europe have backed a coup attempt by opposition leader Juan Guaido against elected President Nicolas Maduro.

"The European Union has resorted to illegitimate ways to topple a legitimate government in Venezuela," he said, calling undemocratic measures "unacceptable."

In regards to both Venezuela and Syria, the president said Turkey cannot accept imperialism.

He said the region east of the Euphrates in Syria is a critical issue for Turkey, and that the proposed safe zone must be established under Turkey's supervision.

In regards to Turkey's agreement with the U.S. on Manbij in northern Syria, Erdoğan said: "Turkey's patience will run out soon if the PKK-linked (People's Protection Units) YPG terrorists do not leave Syria's Manbij in the next few weeks."

Manbij town and its surrounding area have been controlled by the U.S.-backed Syrian Democratic Forces (SDF), which is dominated by the YPG terrorist group, since August 2016 after ousting Daesh terrorists who captured the town from moderate opposition in January 2014.

In June, Turkey and the U.S. reached a deal to end YPG presence in Manbij, but Washington has been slow to keep its commitment. Turkey has said it will carry out the necessary operations to oust YPG from the region by itself if the U.S. does not act promptly.