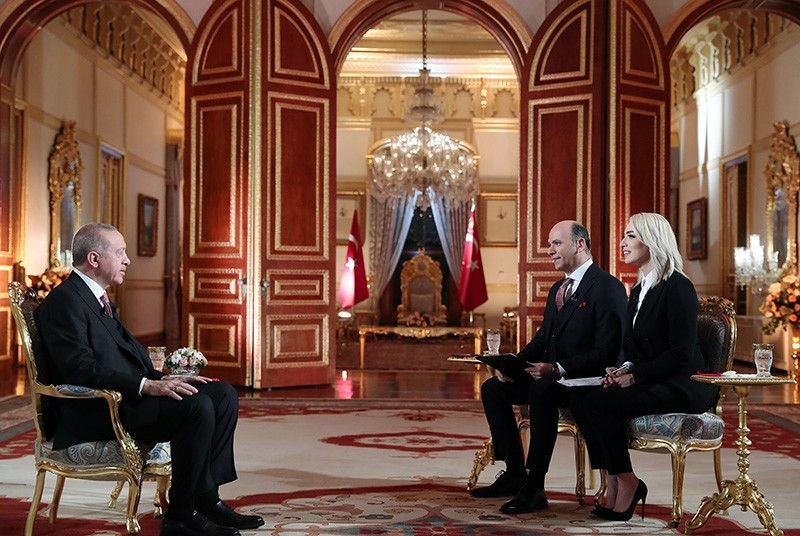 Saudi Arabia's own intelligence officers said the killing of journalist Jamal Khashoggi was a "disaster" when Turkey allowed them to listen to the audiotapes of the murder, President Recep Tayyip Erdoğan said Friday.

In a live broadcast interview with Turkuvaz Media Group broadcasters, Erdoğan slammed the CIA and U.S. for failing to "put their full weight" behind an investigation into the Saudi journalist's death.

Last week, U.S. President Donald Trump failed to meet a 120-day deadline to provide a report to Congress on the killing. Also last week, U.N. Special Rapporteur on Extrajudicial and Arbitrary Executions Agnes Callamard concluded after a visit to Turkey that Saudi Arabia not only planned and perpetrated the killing but also hindered Turkey's investigation efforts.

"I must thank the Turkuvaz Media Group for revealing some important information on the Khashoggi murder, which, as far as I know, will be published not only in Turkish but also in English and Arabic," the Turkish president said.

Erdoğan also said the fifth and next Turkey-Russia-Iran leaders' meeting on Syria will be held in Turkey, noting that the latest Sochi summit was very productive and useful. Erdoğan and his Russian and Iranian counterparts Vladimir Putin and Hassan Rouhani met in Sochi on Thursday to discuss the ongoing peace process in Syria.

Erdoğan also said that U.S. refusal to extradite Gülenist Terror Group's (FETÖ) leader Fetullah Gülen is raising tension in relations with Turkey. Turkey has submitted a series of files requesting the extradition of Gülen, who is accused of carrying out the failed coup attempt of July 15, 2016, but the U.S. has made very little progress toward serving justice over the terrorist leader.

In regard to Turkey-EU relations, Erdoğan said: "The only reason why the EU does not accept Turkey's accession is that we are a Muslim country. An official actually confessed about this." The president noted that EU officials do not dare to mention this and instead use excuses like Turkey's population is too high to become a member state but say otherwise behind closed doors.

Turkey's journey to become a member of the EU has seen numerous ups and downs in the last 50 years. Ankara has been doing its part to cooperate in the negotiations, which started in 1963 with the Ankara Agreement. Nevertheless, Turkey is still waiting for membership decades later as the EU continues to drag its feet.