S-400 deal final, not an alternative to Patriots 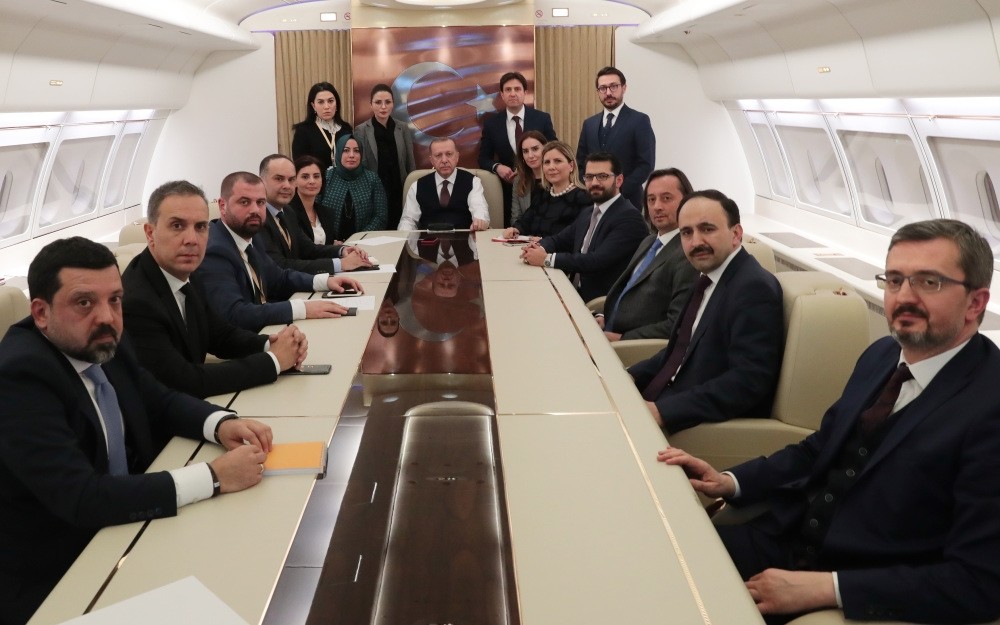 Erdoğan said there is no turning back on the S-400 deal with Russia, adding that Turkey is interested in purchasing U.S. Patriot missiles as well, as long as they serve national interests

The deal with Russia over the S-400 missile defense systems has been completed and their delivery is scheduled for July, President Recep Tayyip Erdoğan said yesterday, adding that Turkey is also open to negotiations for the purchase of the U.S. Patriot systems as long as Ankara's interests are served.

"We have made the S-400 deal with Russia, so it is out of question to take a step back. The job is done. When it comes to the Patriots, we are open to buying them. However, this purchase needs to serve the interests of our country," Erdoğan told journalists accompanying him on the way back from the Russian city of Sochi, where he met with Russian President Vladimir Putin and Iranian President Hassan Rouhani to discuss developments in Syria.

Erdoğan added that in the case of an agreement with the U.S. over the sale of the Patriot systems, their joint production, how they will be financed and the timing of their delivery would be issues needing further discussion.

"Even though the U.S. administration is positive on the early delivery, they still do not have a clear position on joint production and financing," he added.

Turkey's deal with Russia over the purchase of the S-400 defense missile systems has caused discomfort in Washington, claiming that the Russian-made systems could risk the security of some U.S.-made weapons and other technology used by NATO, including the F-35 fighter jets.

The Ankara-Moscow S-400 deal was inked in December 2017, when the parties signed a $2.5 billion agreement for two batteries of the systems - Russia's most advanced long-range anti-aircraft missile system. Turkey will be the first NATO member country to acquire the system. Moreover, Turkey seeks to build its own missile defense systems as the deal also involves the transfer of technology and know-how.

In December last year, the U.S. State Department approved the possible sale of the Patriot air and missile defense system, saying that Turkey continues to be an essential element of national security and defense strategy. This was regarded as a breakthrough move after Washington's delay of the F-35 jets to Turkey due to its purchase of the Russian-made S-400 defense system.

Ankara says, however, the two deals are not alternates to one another and the conditions attached to their sale agreements must be dealt with separately.

"We are continuing our work based on the deal that the S-400s will be delivered in July," the president added.

Safe zone in Syria must be under Turkey's control

Commenting on the U.S.' decision to withdraw from Syria, Erdoğan said there must be consistency when it comes to voices emerging from Washington on the issue, and that the control of a proposed zone must be administered by Turkey.

"The U.S. withdrawal decision remains a process with uncertainties. Some efforts to slow down the process cannot be denied. We are following it carefully," the president said and added that Turkish officials are in communication with U.S. counterparts over the withdrawal and its aftermath.

Erdoğan underlined: "First of all, Turkey must be in charge of the control of the proposed safe zone. If not, this would mean that Turkey's safety would continue to be threatened. Secondly, we cannot allow the safe zone to be a protection shield for the YPG [PKK's Syrian affiliate People's Protection Units]." Responding to acting U.S. Secretary of Defense Patrick Shanahan's proposal to establish observation posts by coalition forces, Erdoğan said no steps that may act as protection for YPG terrorists will be accepted.

The decisive stance against the PKK's Syrian affiliate should not be portrayed as a stance against the Syrian Kurds, the president said and underlined that the issue should not be turned into one of "the Turks, the Kurds." "We treat the safe zone issue within the framework of Syria's territorial integrity," he said and added that Russia was also positive on the issue.

Meanwhile, Trump said on Friday that he will make a statement regarding Syria within 24 hours.

Regarding the Idlib deal that was signed with Russia last year, Erdoğan said that all the Astana guarantors, namely Turkey, Russia and Iran, have agreed on preserving and implementing the deal.

"A protection circle has been established around Idlib following joint work with Russia," Erdoğan said. "Russia is at the outer circle while we are in the inner circle. The major responsibility of providing protection belongs to Turkey in the region," he underlined.

He also pointed at the importance of making a difference between the moderate opposition and terrorist organizations within the province, emphasizing the delicacy of the situation. "Our intelligence agency is also working on the issue," Erdoğan said, adding that the Turkish military observation points in the region also have a key duty. "They will not give any chance to the terrorist organizations [to manipulate the situation in the region]," he said.

A regime offensive in Idlib was prevented by Turkish and Russian intervention last year on Sept. 17, when both countries agreed to implement a demilitarized zone between the opposition forces and the regime forces warding off a possible humanitarian disaster.

Erdoğan also mentioned the formation of a constitutional committee as another key issue regarding Syria. He said that negotiations are continuing over some names discussed to be involved in the committee. "Six names are crucial among the 150 names [that are involved in the constitutional committee]. It is important to agree on these six names," he said, adding that the U.N. is also acting delicately on the matter. He also indicated that the works on the new names will be conducted by the Foreign Ministry and its components.

The formation of the committee has been stalled for some time now due to the objections from the Bashar Assad regime since participants at a Russian-hosted conference in January 2018 agreed to establish it.

Another critical topic on Erdoğan's agenda was the security of refugees to enable their voluntary returns to Syria.

"Until now 310,000 people [have] returned to the [northern Syrian] regions that were liberated through Operation Euphrates Shield and Operation Olive Branch," he said.

Referring to the other two Astana guarantor states, Erdoğan said that although the parties Turkey has been acting together with are claiming that 20,000 people have returned to their hometowns thanks to their work, the numbers cannot be compared. "We have to be aware of which level Turkey is at [in providing safe areas for Syrians to return] and which level the others are at," he said.

Since the start of the Syrian crisis in 2011, Turkey has been hosting some 3.5 million refugees, the largest Syrian refugee community in the world. The country has spent some $35 billion for the needs of refugees living in tent camps as well as those living outside the camps on their own. As the conflict escalated, Turkey stepped up its advocacy for the establishment of safe zones within Syria, to accommodate both those who took shelter abroad as well as internally displaced Syrians.

Returns increased in the past months after successive operations to end Daesh's takeover of al-Bab, Jarabulus and the clearing of YPG terrorists from Afrin in Operation Euphrates Shield and Operation Olive Branch in 2016 and early 2018, respectively.

When it comes to the Manbij road map, Erdoğan pointed at the delays within the process, saying that although they initially said it will take 90 days to clear the area from terrorist elements, it's been almost a year and the road map has still not been completed.

"The east of the Euphrates should be cleared of terrorist organizations," he emphasized.

In a bid to face the threats emanating from the presence of the YPG in Syria, Turkey seeks to fully implement the Manbij road map, which was first announced in early June 2018 and aimed to establish security and stability in the city by clearing out YPG forces. The deal envisages the withdrawal of the YPG from the city and joint patrols to be conducted by the militaries of both countries. YPG forces first acquired the city in 2016 with the help of U.S-led coalition forces.

"We are doing what Gulf countries and the U.N. have failed to do [in Geneva] with the Astana process. I'd like to underline this," he said, adding that the next Astana summit will take place in Turkey.

The first meeting of the Astana process was held in Turkey back in January 2017, with an aim to bring all warring parties in the Syrian conflict to the table. It was meant to complement U.N.-sponsored peace talks in Geneva.

A total of 11 rounds of talks have been held as of yet, leading to the establishment of four de-escalation zones in the northwestern province of Idlib, north of the central city of Homs, the Eastern Ghouta area outside Damascus and in the southern provinces of Deraa and Quneitra.

"Until now, we have to take some steps. In fact, during our meetings, I've said that we can also include Iraq and Lebanon in our talks. Because, both share borders with Syria and their ties with Syria are at differing levels," said the president.

"Our foreign ministers would work bilaterally and if they agree, these states would also join the Astana process and the process would be more effective," Erdoğan underlined.

Trade with Iran can be done with local currencies

In the face of challenges posed by U.S. sanctions on Iran, Erdoğan said bilateral trade transactions with Iran can be done using local currencies and that the issue is being discussed.

He also added that Turkey has a positive position over joining the trilateral establishment between Germany, the U.K, and France in trading with Iran; a new mechanism meant to ease trade with Iran despite U.S. sanctions - a sign of their commitment to the 2015 nuclear deal with Tehran.

While the new institution, called INSTEX, short for Instrument in Support of Trade Exchanges, is a project of the three governments, it will receive the formal endorsement of all 28 EU members.

The company was registered in Paris at the end of January with an initial 3,000 euros ($3,380) in capital and a supervisory board with members from France and Germany and chaired by a Briton. In the longer term, INSTEX aims to be open to third countries wanting to trade with Iran.

Erdoğan said Turkey has shown willingness to join the trilateral establishment, and if it is not possible, other alternative groupings could also be discussed.

Meryem İlayda Atlas is Editorial Coordinator of Daily Sabah. She is board member of TRT, the national public broadcaster of Turkey. Atlas also serves as a visiting scholar at Çanakkale Onsekiz Mart University.
Last Update: Feb 16, 2019 8:44 am
RELATED TOPICS