Syrians hold onto life, engage in wide range of economic activities in Afrin 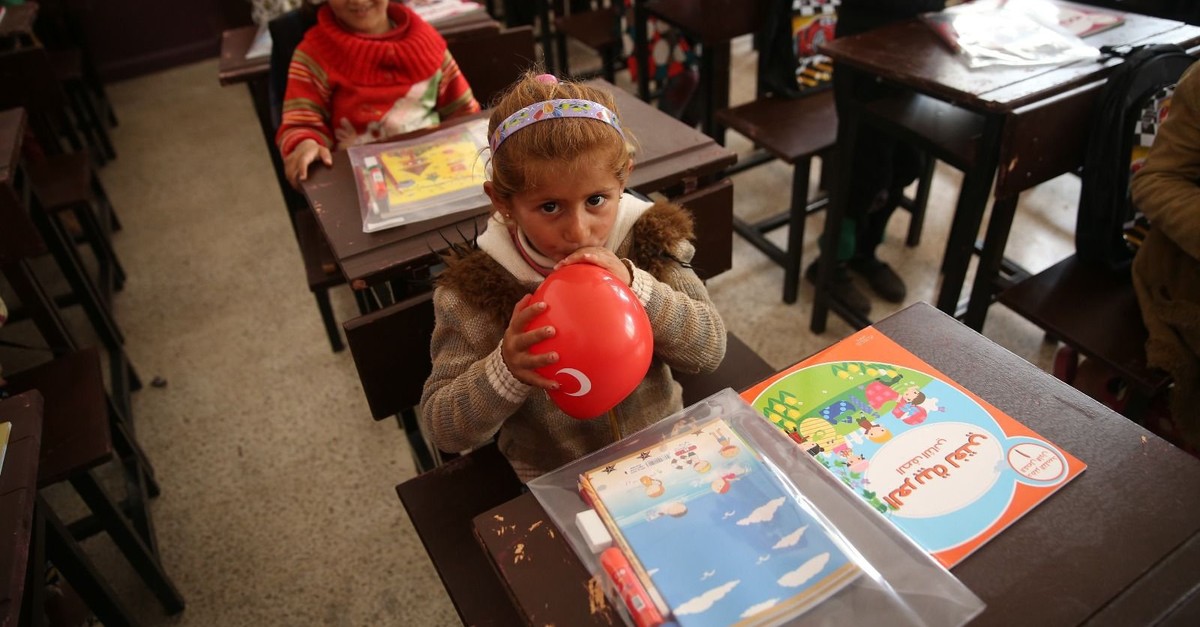 Syrian children returned to classrooms after two years, after Afrin was cleared of terror groups thanks to Operation Olive Branch, March 26, 2018.
by Miray Akın Feb 22, 2019 12:14 am

Following a Turkish military operation in 2018, life in Afrin has slowly returned to normal, and currently locals are working on improving the economy of the province through industrial initiatives

After six years of terrorist occupation that led to the destruction of many schools, hospitals and factories, locals in northwestern Syria's Afrin are clinging to life by engaging in economic activities to regain a stable footing. The PKK-affiliated People's Protection Units (YPG), which claims that its ultimate aim is establishing an autonomous region in parts of Syria, made the northern city their main hideout in 2012 when the Bashar Assad regime left the city to the terror group without a fight. However, after Turkey's Operation Olive Branch, which was carried out to re-establish security and stability along Turkey's borders and to protect Syrians from oppression, Afrin's town center was liberated from terrorist elements in March 2018.

Since then, the people of Afrin have joined with Ankara to breathe life into the economy.

Although Afrin has a rural hinterland, the economic situation of the region changed after the war as the majority of the clothing, shoes and soap sectors shifted to the region, Nasir Hüsso, head of the Afrin Chamber of Industry and Trade, told Daily Sabah.

"Before the war, the main income was dependent solely on olive production, but now the seeds of an emerging industry have begun to burgeon in the region," Hüsso added.

Diverse agricultural production, including wheat, barley, lentils, sunflowers, corn, sugar beets, cotton and tobacco, is essential for Afrin's economic development; yet, the northwestern city specializes in the production of olive oil and has around 18 million olive trees.

In the most fertile years, the city can harvest up to 270,000 tons of olives, where the usual average stands at 75,000 tons, enabling the majority of the population to earn its keep.

Furthermore, grapes, oil, cereals and soap oil are other products that are mainstays of the city's export revenue.

To increase olive production, Hüsso underscored that they are trying to establish an Afrin agricultural chamber to expand capacity, which envisages a support system to export agricultural, textile and industrial products. While Afrin has been considered the main source of olive oil for Aleppo soap for centuries, the city had to shoulder the entire production chain due to the destruction in the region caused by the terrorists. At the height of the fighting for Aleppo, up to 50 percent of the city's industrial production was moved to Afrin.

"In 2018, nearly 5,000 tons of soap were produced. We want to sell it to foreign markets. If we are given a chance to penetrate foreign markets or if we move our products in the foreign market through Turkey, the great potential of the agricultural and apparel sectors could be unlocked. For example, we export ready-to-wear products to many countries, including Russia and several Arab and European countries," Hüsso noted.

However, he indicated that they couldn't provide product flow to foreign markets on the grounds that manufactured goods cannot be issued a certificate of origin, as they do not have any connection with Damascus. Pointing to the shoe sector in Aleppo, which has a $500 million quota, to illustrate the potential of the region, Hüsso underscored that with the possibility of opening up to foreign markets the region would reap great profits.

To revive the economy of the city, Hüsso added that many workshops and factories have been established, contributing significantly to employment. Syrian women who successfully completed textile courses were encouraged to continue their work. Textile workshops, which were closed when the city was under terrorist occupation, were also reestablished. As of early 2016, 2 million pairs of jeans were produced per month and exported across the country. In January 2017, 400 textile industry workshops provided employment opportunities to almost 17,000 people.

"Businessmen are thought to have poured over $4 million into the apparel, food and beverage sectors. Many companies, including Turkish firms, also gave us offers on electricity, and we are now evaluating them," Hüsso stressed.

However, highlighting that economic development is directly linked to security in the region, Hüsso said providing job opportunities is necessary to establish social peace, which will eventually bring an environment of confidence with it.

"While Turkey, Russia and Iran manage the Astana process, in parallel we are exerting efforts to revive economic growth. If we can provide the environment of trust, the number of people fleeing to Europe will decrease," Hüsso added. To bring all warring parties in the Syrian conflict to the table, the Astana process started with a meeting in Turkey in January 2017, supporting the establishment of the U.N.-backed constitutional committee in Syria as a way to find a political solution. Since the 2011 uprising against Syria's Assad regime, more than 5.4 million Syrians have fled across the border into Europe, but especially fled into neighboring Turkey in hope of a better life.