There is no 'Kurdistan' in Turkey, Erdoğan says, bashing CHP for closeness with pro-PKK HDP 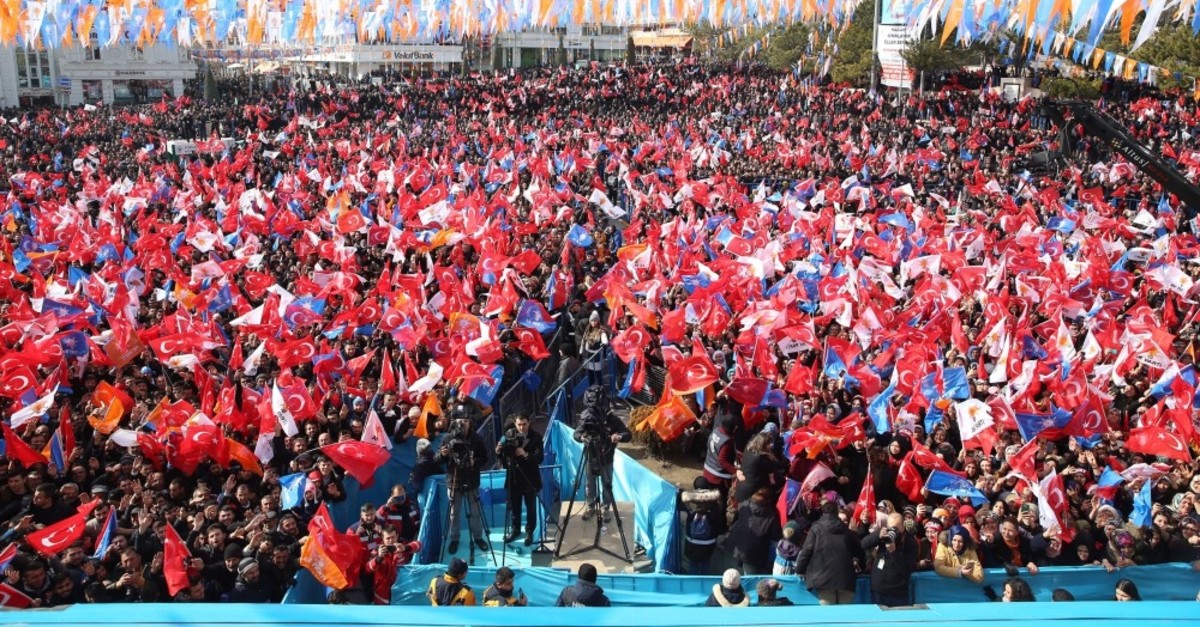 At the center of the criticism, there were the words of a HDP member, who referred to eastern Anatolia as "Kurdistan," during a joint event with CHP members. Erdoğan blasted the speech, underlining that there is no such region in Turkey. Speaking at the central Yozgat province at a rally for the March 31 local elections, Erdoğan said that the CHP is acting with Qandil, referring to the mountains where the PKK terrorist group's headquarters are located.

"They say that in 'Kurdistan,' they will give their votes to the HDP and in the west [Anatolia] they will cause the failure of the AK Party and the MHP [Nationalist Movement Party, the partner of the AK Party in the People's Alliance]. Since when was there a region in Turkey called 'Kurdistan?'" Erdoğan asked, adding that the ones who try to divide the country will fail.

Yesterday, during a joint event organized for the CHP's Şişli district mayoral candidate, Muammer Keskin, the HDP's Şişli district head, gave a speech in which he expressed his support for Keskin while referring to eastern Anatolia as "Kurdistan."

"In 'Kurdistan,' we will take back all the municipalities that have trustees. In the other part of Turkey, on the other hand, we will not let the AK Party-MHP coalition win," the HDP member said, mentioning the country as if it consists of two separate states.

"They claim that they will take back the provinces with trustees. If my citizens would give you the chance to take those provinces back, and if you try to support Qandil with the state's own means, then we will designate trustees again," Erdoğan said as a response.

The state appointed trustees to HDP-linked municipalities due to their cooperation with the PKK. Since 2016, Turkey has removed the elected administrations of 93 municipalities in the region for their links to the PKK terrorist group. The new administrations have been welcomed by locals as they brought new services and cut the flow of money to the group.Erdoğan also played a compilation of various video clips during the rally, in which some HDP figures were expressing their support for the PKK and its affiliates, while expressing that they do not recognize the PKK as a terrorist organization. The HDP announced previously that it would not nominate mayoral candidates in seven major municipalities, including Istanbul, İzmir and Ankara, in the upcoming municipal elections. The decision raised questions about a possible secret alliance between the CHP and the HDP. Both parties have refuted such claims.

The CHP has refrained from officially including the HDP, which has been condemned for its close ties with the PKK, in the Nation Alliance, which is an electoral alliance with the İP, amid fears of a possible backlash from its secular-nationalist voter base. In the June 24, 2018 general elections, however, the CHP urged its voter base to vote for the HDP to stop the AK Party from having a single majority.

The Turkish government has long accused the HDP of close links with the PKK. The HDP is known for its support of autonomy in regions where large Kurdish populations live. Some of its members have also been charged or accused of having links to the PKK terrorist organization. Its former Co-chairman Selahattin Demirtaş was arrested in November 2016 for terrorist propaganda. Many of its members have often voiced overt support for the PKK.