As alliances come into focus, Turkish politics get closer to a two-party system 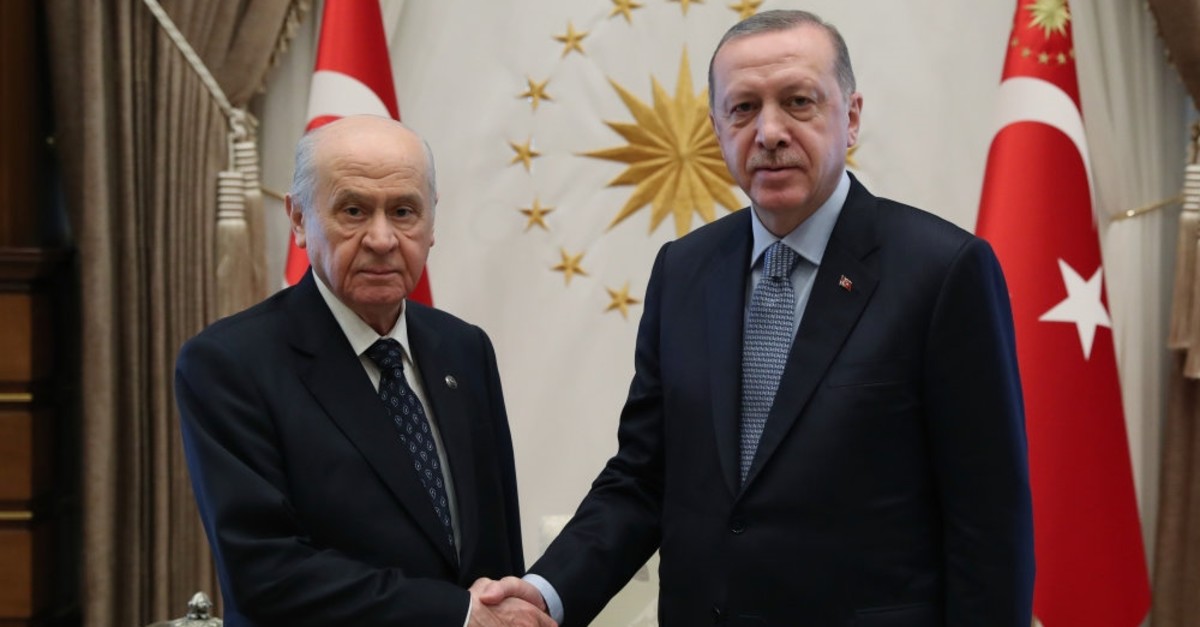 Recently, Turkey has witnessed crucial shifts in politics that started with the presidential system and were followed by the emergence of alliances. The latter has made political affiliations more explicit by summing them up under two separate alliances, which eventually caused the rumors of a brand new transformation, this time into a two-party system

Local elections in which people in Turkey will go to the polls to vote for the municipal heads of their respective provinces are only a month away, causing politicians to intensify their campaign traffic to attract voters. However, one thing differentiates this local election from previous ones, as there are mainly only two parties that are conducting proper campaigns, the ruling Justice and Development Party (AK Party) and the main opposition Republican People's Party (CHP), while in fact 12 political parties are participating in the elections. This situation, which mainly stems from the alliances that were formed, brings a question to the mind: Is Turkish politics evolving into a two-party system?

The notion of a two-party system was first mentioned in Turkish politics by President Recep Tayyip Erdoğan, long before his presidency, back in 2011 when he was the prime minister of the country.

"I find this system [two-party system] quite effective," Erdoğan said during an interview. "Because, in binary systems, parliaments act more effectively and there is stability in the administration," he said.

Although it caused a brief period of debate over a possible transition to the two-party system at that time, the topic remained in the background until 2017, when Turkey voted to shift to the presidential system instead of a parliamentary one.

The two-party system does not exactly mean the abolition of a multiparty system. It is a kind of subcategory within the multiparty system where it is allowed to have multiple political parties, but two come to the forefront as the ones who have major influence within the country's politics. The U.S. is one of the greatest examples of this system. Even in the U.K., a sort of two-party system exists since traditionally the same two parties dominate politics, while others have only a minor influence.

The presidential system is often considered to be a factor that encourages a two-party system since, in order to win the majority, smaller parties need to join forces and become a single entity. Although not all presidential systems in the world are actually two-party systems, it is not surprising to see, in a presidential system, parties forming alliances. Especially in the presidential elections, it is a must to win more than 50 percent of the votes, which is a percentage that is hard to achieve by a single party alone. Thus, parties form alliances in which they are able to remain themselves, while joining forces with others at the same time, increasing their chances of winning.

Turkey has gone through a similar period within the past year. The presidential system was approved as a result of the referendum held on April 16, 2017, in which it was decided that Turkey would be ruled by a presidential governing system as of 2019. Thus, in 2018, when the first presidentia

l elections took place, they witnessed a unique period in Turkish politics. In the 2018 presidential and parliamentary elections, political parties in Turkey formed alliances for the first time in the country's political history.

The Nation Alliance, however, after disappointing results in the elections, all four parties made statements and announced that the alliance was over.

Still, CHP and İP have come together once again and took the decision to continue their alliance under the same umbrella of the Nation Alliance. As a result, two major sides have emerged as the main participants of Turkish politics. Following these developments, the discussions around a two-party system have come to light once again.

"Maybe, in the upcoming days, we can go beyond this system that evolves around two axis and transitions into a two-party system," Numan Kurtulmuş, the AK Party general vice president said on Feb. 16, signaling the future of the Turkish political scene.

However, according to an analysis by the Political, Economic and Social Research Foundation (SETA), written by political analysts Nebi Miş and Hazal Duran and called the "Election Alliances," this is not exactly a transition into a two-party system, but actually to a two-block system.

"With the alliances emerging in Turkey, a transformation started not toward a two-party system, but toward a two-block system. It is not exactly same the system as in the U.S.," said Duran, speaking to Daily Sabah on the issue.

It would not be so wrong to say that for Turkish politics there are traditional blocks based on ideologies that constantly divide voters into two, although they are not officially recognized.

Sometimes these two sides are called conservative and secular, and sometimes they are called right and left. Eminent Turkish sociologist Şerif Mardin refers to this binary nature of Turkish politics as core and periphery, which can be traced back to the Ottoman era. According to Mardin, since the foundation of the Republic, this difference becomes first apparent during the CHP's single-party rule until 1949 - between the party and the people, especially people from the rural areas. And then with the arrival of the multiparty system with the foundation of the Democrat Party. The Democrat Party replaced the people and sides in Turkish politics became clearer. As the center, CHP embraces harsh attitudes toward the people as well as an elitist identity. People in Turkey, in Mardin's opinion, tend to form closer bonds with those who represent the periphery, which, in current politics, can be identified with the AK Party.

These two sides, which mark the lines of the blocks, have actually become influential in the formation of the current alliances as well, especially the People's Alliance.

On Feb. 25, President Erdoğan said that the alliance had its roots in the country's history, times when there was a national struggle against occupiers in the post-World War I period. Erdoğan said that the People's Alliance is the coming together of people who shared the same desires and aims at that time, underlining the ideological association between the parties, both of which were based on right-wing, conservative tendencies.

However, when it comes to the Nation Alliance, finding this ideological corporation becomes a bit trickier. The first Nation Alliance on June 24, 2018 was formed with the Islamist, conservative SP and the center-right, moderate conservative DP. Both these parties' ideologies actually contradictory to the CHP's outlook, since it is a center-left, secular party. The alliance with the İP is even more absurd since the party actually consists of the dissidents of the MHP, one of the parties that they ran against. In addition to all these ideologies, the Nation Alliance is also known to have a close relationship with the pro-PKK Peoples' Democratic Party (HDP), which is known for its support of autonomy in regions where large Kurdish populations live.

Although on first sight it seems like there is no way that these conflicting ideologies can come together, there is one crucial reason behind this alliance: The opposition against the AK Party. The CHP, by merging these various points of the spectrum into a single pot, aims to bring voters of different background together and gain an advantage against the AK Party-MHP alliance, which represents a little more than half of society's population.