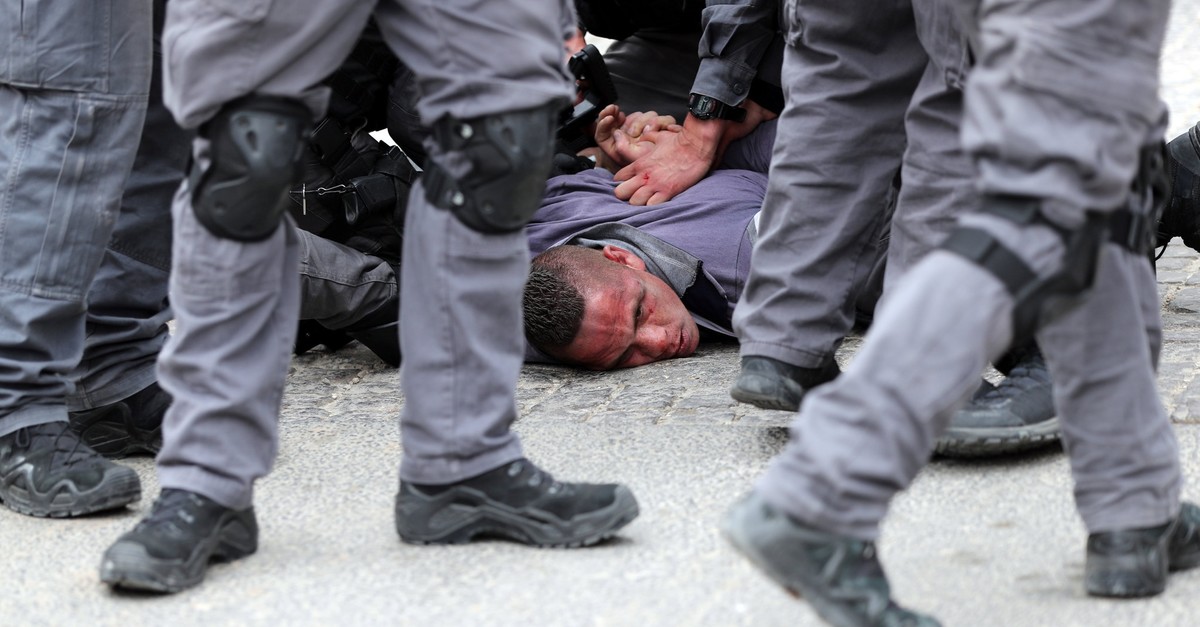 Israel, with its discriminatory and racist policies against the Palestinians, seems to think it is acceptable to smear Turkey through baseless allegations

Israel has tried to put Turkey in the spotlight by attacking the country using unjust, baseless slurs to cover up its recent unlawful actions against the Palestinians in Jerusalem. Unable to deal with the criticisms of his unlawful policies, Israeli Prime Minister Benjamin Netanyahu chose the easy way and attacked Turkey on Tuesday on his social media account with an out of place tweet. He referred to domestic issues in the country, implying that a state with such issues has no right to criticize Israel's actions, while also including a slur against President Recep Tayyip Erdoğan to spice up his claims and draw even more attention. The tweet received an immediate reaction from Turkey, which slammed the Israeli prime minister for his actions and vowed that he will be brought to account.

"Do not irritate us [Turkey]," Erdoğan said with regard to Israel in a rally Wednesday. "We will not allow Al-Aqsa Mosque and the dome of the rock to be soiled by soldiers," he added, referring to the occupying Israeli troops. "I've urged my foreign minister on the issue, and he is negotiating with the international community to take action," the president noted, calling on Turkish society to address any attack against the Al-Aqsa mosque.

Erdoğan vowed that Turkey would continue its fight for Jerusalem to be governed in accordance with its importance for Muslims till the end.

"Insanity is doing the same thing over and over again and expecting different results," Altun said on Twitter. He was referring to a well-known quote by renowned scientist Albert Einstein, adding a video showing a spat between Erdoğan and then Israeli President Shimon Peres at a Davos Summit held in 2009, an incident widely known as the "one-minute incident" by the Turkish public.

"I strongly condemn this blatant racism and discrimination," Kalın said. "[Some] 1.6 million Arabs/Muslims live in Israel. Will Western governments react or keep silent under pressure again?" he asked in reaction to Netanyahu's decision to expand Jewish settlements in the occupied Palestinian territories by constructing over 20,000 new houses in east Jerusalem in the next five years, which he uses as a propaganda tool for the upcoming elections in Israel.

Both countries are heading to the polls, with Turkey's local elections slated for March 31 and Israel's snap general elections scheduled for April 9.

Netanyahu further claimed that Jerusalem was not simply a place for living but Israel's "capital." He has repeatedly called Israel the nation-state of "the Jewish people" only, drawing dire international criticism.

Kalın continued to criticize Netanyahu following his slurs against Erdoğan, saying that he is attacking the president "for exposing the Israeli leader's racist remarks towards Arabs and Muslims."

Settlements are one of the most heated issues in efforts to restart Israeli-Palestinian peace talks, frozen since 2014. Israeli authorities approved construction of 10,298 new Jewish settlement units in the occupied territories last year, according to a PLO report released in January. The move further diminishes the chances for a two-state solution for the Israeli-Palestinian conflict. The international community regards all Israeli settlements in occupied Palestinian territories to be illegal and a major obstacle to Middle East peace. The area, captured by Israel in 1967, is not sovereign Israeli territory, and Palestinians there are not Israeli citizens and do not have the right to vote. Some 500,000 Israelis live in the West Bank and East Jerusalem, areas that are also home to more than 2.6 million Palestinians. Palestinians have long argued that Israeli settlements could deny them a viable and contiguous state.

Meanwhile, the Al-Aqsa mosque, which was shut down Tuesday on claims of an arson attack on an Israeli police station near the site that eventually, caused a fight with Palestinians, reopened yesterday before dawn prayers. Jerusalem's Religious Endowments Authority, a Jordan-run agency that oversees the city's Muslim and Christian sites, reported that during the clashes between Palestinians and Israeli soldiers, around 16 Palestinians were injured while 10 others, including two minors, were arrested for allegedly initiating the fight.

The recent brutalities in the mosque led to widespread condemnation by various Palestinian groups, which said escalating tensions in the Al-Aqsa Mosque stems from arbitrary Israel policies against Palestinians, land and sacred places.

"The prevention of the congregation, which wanted to pray in Al-Aqsa, Judaization, occupation, destruction and deportation of the capital [Jerusalem], will not affect the determination of our people to remain loyal to the resistance and the land," said Atef Abu Saif, spokesman of the Fatah movement in a written statement, adding that these incidents are a result of the silence of the international community.

cred mosque when they want. More criticism came from Mustafa Barghouti, leader of the Palestinian National Initiative movement, who said that Palestinians could fail Israel in its aims by being united and determined.

The U.N. also broke its silence on the issue. "I am following events at the holy esplanade in #Jerusalem with concern," Nickolay Mladenov, U.N. envoy for Middle East peace, said on his Twitter account.

"Places of worship are for prayer, not for provocations and violence," he added and called for restraint.

He also urged everyone to show respect for the status quo in Jerusalem.

Despite all the criticism, Israel insists on its unlawful policies, rounding up 29 Palestinians in overnight raids carried out across the occupied West Bank.

According to the Israeli military's statement released yesterday, the individuals were arrested for "suspected involvement in terrorist activities." It said the suspects were kept in custody for further investigation. It is not a surprising move for the Palestinians since the Israeli army frequently carries out wide-ranging arrest campaigns across the West Bank claiming that they are looking for "wanted" Palestinians. It is currently estimated that more than 6,000 Palestinians are currently languishing in Israeli detention facilities, including women, children and a handful of lawmakers.