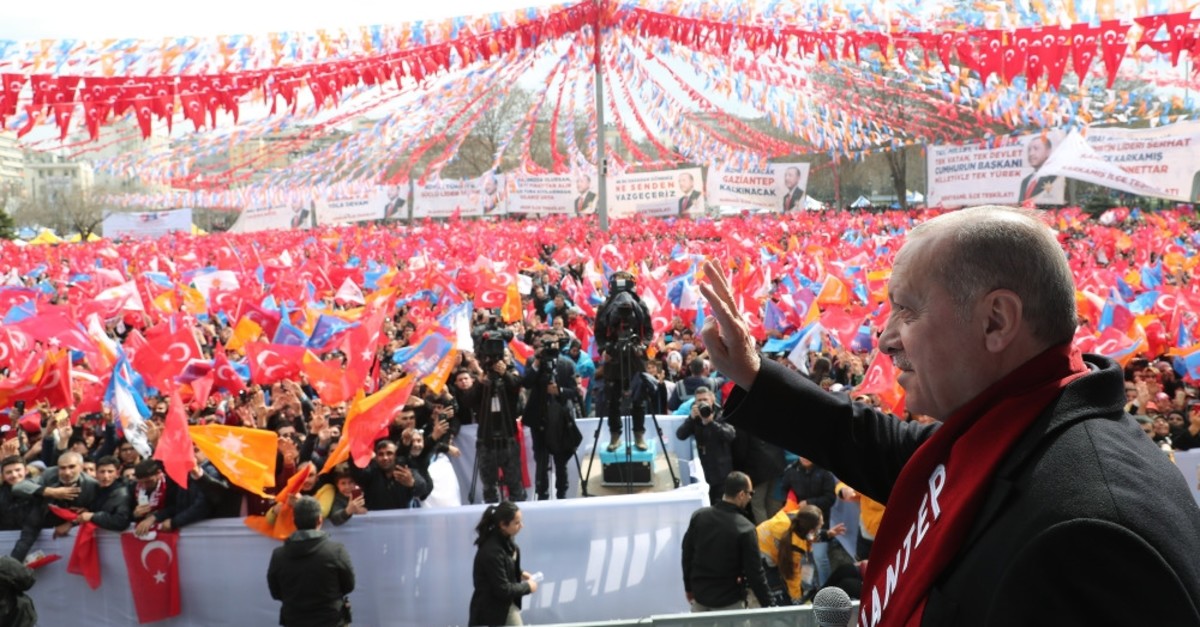 President Recep Tayyip Erdoğan announced several new projects for southern Turkey's Gaziantep, including a city park and a ‘city of civilizations,' which will consist of building traditional houses that represent the historical aspects of the province

The Chairman of the ruling Justice and Development Party (AK Party), President Recep Tayyip Erdoğan was warmly welcomed by a huge crowd from various districts of southeast Gaziantep province on Friday, where he presented new projects for the city including a "city of civilizations," and a city park.

Speaking at a rally, Erdoğan, referring to an area belonging to the military at the center of the city, said that there is no need to keep such a giant area for military purposes.

Accordingly, he highlighted that this area of 10 million square meters will be used for different purposes. In the 5 million square meter area, a people's garden will be created consisting of gardens of roses and linden trees. In the remaining part of the area, a "city of civilizations" will be built with traditional Gaziantep houses representing the historical aspect of the province, the president announced.

The president also highlighted that he expects to see an increase in the support of Gaziantep locals to the People's Alliance in the upcoming local elections.

Ahead of the June 24 presidential and parliamentary elections last year, the AK Party and the Nationalist Movement Party (MHP) had formed the People's Alliance, and it's still in place for the March 31 elections. The alliance received a majority in Parliament, while their presidential candidate, Erdoğan, also won the election with 52.6 percent of the vote.

Erdoğan also praised the people of Gaziantep for the hospitality they showcased for Syrian people fleeing the civil war. The province is one of the cities which hosts the most Syrian refugees in Turkey.

Gaziantep mayor Fatma Şahin who will run for another term in the local elections also attended the rally.

Şahin is well-known for being elected as the Gaziantep deputy from the AK Party in the 2002 elections and two consecutive elections thereafter in 2007 and 2011. Having served as the family and social policies minister between 2011 and 2013, she also became the first female minister from Turkey's predominantly conservative Southeastern Anatolia region. Şahin quit her post in late 2013 to run for mayor in the 2014 local elections, which she won with 51.7 percent of the votes. Since then, she has been praised for her successful work in Gaziantep.

Commenting on the services of the Gaziantep municipality, a disabled citizen and the head of Gaziantep sports club for disabled people, Hüseyin Köse said that "as disabled people we appreciate our mayor Şahin's ongoing support."

Stressing that disabled people have been participating in sports such as handball and volleyball, Köse said that they have a sports complex in the province and called for the municipality to open more complexes.

Köse also said that the municipality substantially improved the infrastructure addressing the needs of the disabled people.

Erdoğan said that in the last 17 years of AK Party governments many steps were taken to develop the city.

"In the last 17 years, health centers consisting of 20 hospitals with a 1,135-bed capacity were established," Erdoğan stated and added that in the upcoming period a new city hospital is being built with a capacity of 1,875 beds.

Despite the cold and rainy weather, people waited until the end of the rally.

Justice Minister Abdulhamit Gül, who is also from Gaziantep, attended the rally. Speaking at the rally, he said that Gaziantep has always shown sincere support to the ruling government.

"Gaziantep is a symbolic province where 2 million people who are from different ethnicities live together in unity," Gül said.

After the election rally, Erdoğan visited the Panorama Museum in the province.