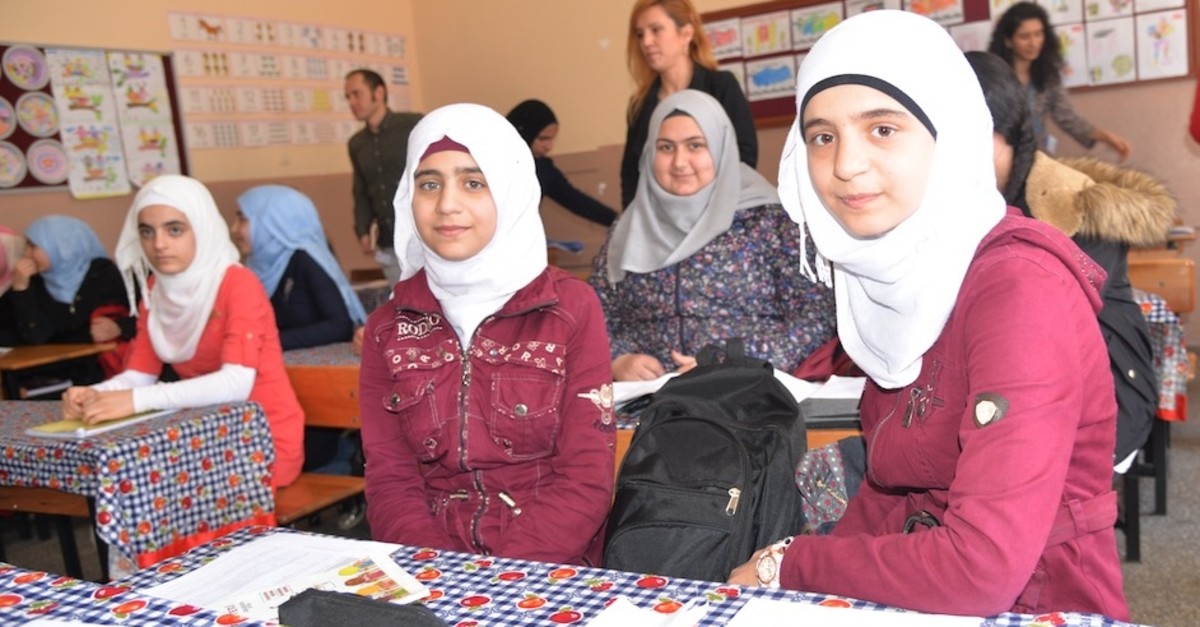 Turkey, as a country that hosts the largest number of Syrian refugees, attaches great significance to ensuring the social cohesion of refugee children and providing them an education, as the war in Syria has no end in sight. To prevent children from paying the highest price of war, a multidimensional education is given to Syrian children in southeastern Adana province with the support of various programs to keep their dreams for the future alive. Initiatives such as the Conditional Cash Transfer for Education (CCTE) Program for Syrians and other refugees are actively used to provide educational opportunities and keep students in school.

Since many Syrians fled to Adana as the province has the optimal living conditions with its warm climate, Ömer Oflaz, deputy provincial director of national education in the province, said that they have been exerting great efforts to ensure children's access to education. 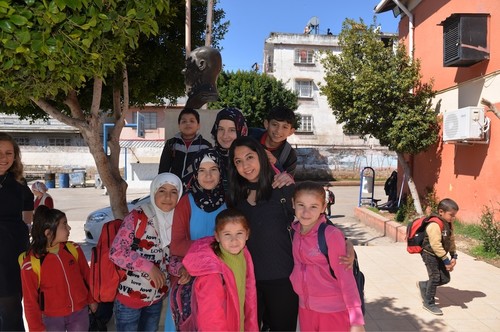 Thus, families receive cash support every two months through Kızılay Cards on the condition that the child attends school regularly, which means at least 80 percent attendance.

The amounts paid vary depending on the gender and grades of school-going children. Furthermore, TL 100 per beneficiary child is paid at the beginning of each semester to support families to meet additional expenses for school.

The number of beneficiary students in the CCTE Program in Turkey is 487,089 with 430,657 of these children at the primary school level benefiting from the program, while 37,757 beneficiaries are at the high school level.

Gökhan Eroğlu, principal of the Şehit Duran Primary School and the TEC in Adana, told Daily Sabah that 688 students are in Şehit Duran Primary state school, 358 of them are Syrians. He noted that the CCTE program is essential in the education process of Syrian children. 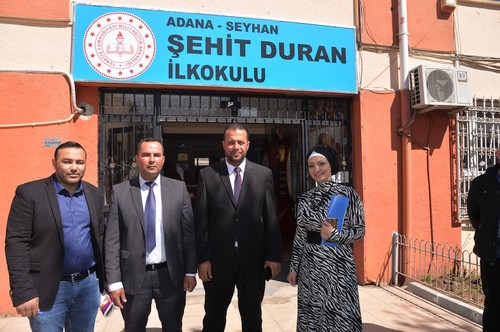 The principal stressed that in state schools the national education curriculum is followed, while Syrian students can continue learning Arabic at the TECs as well.

He said 41 voluntary teachers are Syrians with 11 Turkish language teachers in the TEC. Eroğlu noted that 15 hours of Turkish classes are provided, while in the remaining 15 hours students learn the curriculum in Arabic. He stressed that with this multidimensional approach, students' cohesion in Turkey is achieved, and if they would like to return to Syria they will not face any difficulties since they continue learning Arabic as well.

"To increase the integration of Syrian students, we urge them to participate in competitions in arts and sports. Consulting teachers organize activities to enhance their integration," Eroğlu said and added that in the integration process, Syrian teachers have been playing a pivotal role as well. 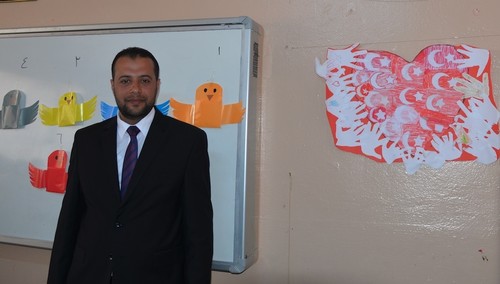 The principal said: "We are certainly not distinguishing our students as Syrian or Turkish. We consider all of them as our own kids and have been attempting to provide the best education for them," while indicating that aside from his formal responsibility he considers that he has a humanitarian responsibility too.

The war in Syria has put millions of children's hopes, dreams and even lives at risk. Syrian children taking refuge in Turkey have started to dream again for their future thanks to the education provided to them.

"I enjoy the math and Turkish classes the most. I go to school now, and in the future, I want to become a lawyer," Mohammad al-Nebhan, 14, who came from Aleppo five years ago said while sitting with his classmates during a break from English class.

Al-Nebhan said that he has Turkish friends in his neighborhood who help him practice his Turkish. "After school, I also attend some other classes; I like my life in Adana," he added. 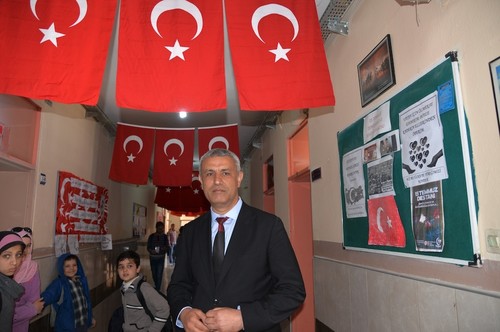 Even though the ongoing war in Syria has left an imprint on the souls of the adults and the memories of the war are still vivid in the minds of many people, Syrian children who came to Turkey appear to be adapting to their new lives as they have been attending school and spend time playing with their friends.

Children participate in activities and games

Pointing to students in the class, Ahmad Abdulsalam, a Syrian teacher and deputy principal, said: "These children came here years ago, they do not usually remember the war. They come to school, participate in activities and games. They feel as if they have always lived here." 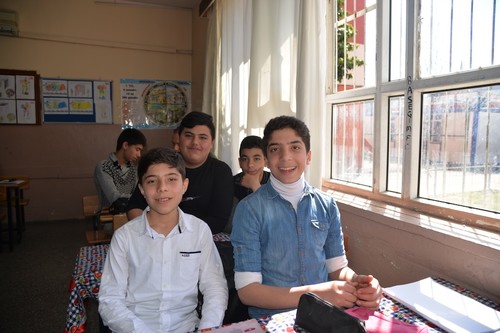 Coming from Aleppo, two sisters, Ragad and Ele Hamidi, study Turkish in the same class, helping each other with new vocabulary they learn at TEC. "We are happy that we are coming to school. My favorite class is Turkish, and I want to become a Turkish teacher," Ragad, 13, said with her eyes shining while she talks about her dreams.

While students like Mohammad and Ragad have the opportunity to come to school, some refugee children are not as lucky since their families prefer they work to contribute to household finances.

Furthermore, the climate in Adana provides job opportunities throughout the year in the fields, causing children to be away from school.

For students who do not attend school regularly, the school in Adana appointed two teachers for each classroom; those teachers held one-on-one conversations with parents, and they try to persuade them to send their kids to school.

"As the reason for non-attendance can sometimes be that the children work to contribute to the finance of the household, we inform the parents about the CCTE and managed to enable the return of the children to school," Reem Ahmed Zedan, a Syrian administrator at the school said and added that 40 students came back to school in just a month as a result of their efforts. She noted that 558 students in that particular TEC have been benefiting from the CCTE. Zedan previously worked as a biology teacher in Syria and came to Turkey in 2015 because of the war.

Aside from contributing to child enrollment in school, the CCTE program includes a strategic child protection component to ensure attendance of the most vulnerable refugee children and their referral to child protection services when needed.

This component is implemented by outreach teams of the Turkish Red Crescent and translators. The outreach teams visit families whose children are not meeting the attendance condition of the CCTE program. The teams assess and identify the children and families' needs to address them. They want to find out the underlying reasons for children's non-attendance, and if there are any further problems within the family. This component of the CCTE also enables mitigating child protection risks and violations that cause non-attendance at school. With the child protection component, 55,919 children were reached out to, and 5,077 children were referred to specialized services.

Siraj Ali, 46, was previously working as an architect in Syria but he had to leave the country thinking about the future of his children. "We moved to Turkey because we wanted to provide a safe environment for our kids, otherwise we would be devastated in Syria," the father said.